Ask the Barman: 223 reasons to smile

Slick and sophisticated, Daniel Weinstein effortlessly serves up the drinks at 223, one of Tel Aviv's swankiest cocktail bars.

By YONI COHEN
Barman Daniel Weinstein
(photo credit: Yoni Cohen)
Advertisement
The atmosphere at 223 Cocktail Bar on Tel Aviv's Rehov Dizengoff is sophisticated, yet laid back with an old-fashioned charm, and barman Daniel Weinstein fits right in.Daniel, 25, has mastered the complex cocktail menu, which features a host of original recipes. He is an expert at shaking and mixing the drinks in his own unique style. The barmen at 223, which has a 1920's jazz lounge vibe, all wear shirts and ties to add to the experience. Daniel feels right at home here and loves nothing better than charming the customers with his smooth talk and excellent cocktail making skills.A self-confessed night owl, Daniel says that he wants to be to continue working in bars and clubs for the rest of his life. With six years of experience at various bars in Tel Aviv behind him, Daniel says that now he works at 223 he has found his dream job and can't think of a better place to show off his moves. He took some time out from behind the bar to talk about wild nights and interesting customers. 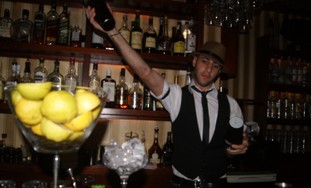 Photo: Yoni CohenHow did you get into bartending?I was a soldier trying to find a temporary job to earn some money to go traveling around the world, and I saw how fun bartending could be.How long have you been doing it?For six years. I've always been a bartender and I always will be. So what was your first bartending job? 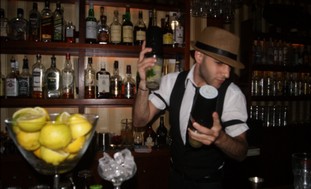 Photo: Yoni CohenI worked at the bar in a burger joint. The bar was a very insignificant part of the restaurant but four months after I started there I began to run the bar and I made it into what it is today. I introduced a new cocktail menu and made other changes – I pretty much revolutionized the place.What is the craziest night you have ever had as a bartender?I was working at a bar on Nahlat Binyamin, the place where I actually learnt the trade. We closed down the place and from six in the afternoon until eight in the morning and we drank our guts out. I think I alone drank three bottles of whiskey. There were women on the bar, people throwing food everyone. We tore down the bar itself at the end, we physically ripped it out of the walls. It was so much fun. 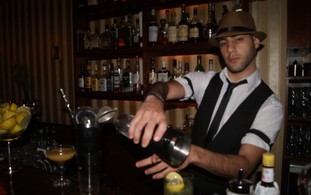 Photo: Yoni CohenWho is the most interesting customer that has ever sat at your bar?In the same bar in Nahlat Binyamin I had a regular customer who came every day. He was from Saudi Arabia and he was the owner of oil pipelines. He would talk for hours and hours. He was the biggest drinker I have ever seen. He could drink at least 4 liters. He was a strange man and always sat alone.Did he tip well?Yes. He always gave at least 50 percent. 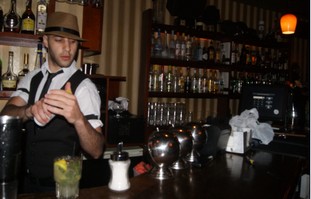 Photo: Yoni CohenWho would be your ideal person to come and sit at this bar?My parents.Why?They are not really night people so I would love for them to come and see me work here at 223. They have been a few times to other places I have worked, but this is my dream bar.What drink would serve them?My mother would have the Bloody Mary and my father the Frisco Sour. 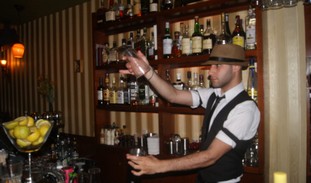 Photo: Yoni CohenWhat don't you like about being a barman?Honestly, I can't say anything bad about it all.Do you enjoy wearing the shirt and tie to work?Not only do I enjoy it, I use these clothes in my day-to-day routine. The waistcoat is from home, the hat is from a friend of mine, as well as the tie. I really like the style of the place in general.This place has a kind of 1920s vibe. Do you enjoy that?Yes sure. I love jazz and things like that. 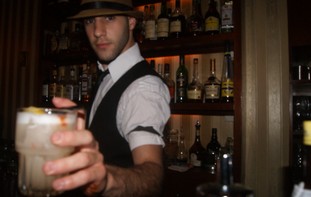 Photo: Yoni CohenHow many people try to hit on you during a night?A lot. Both females and males flirt with me all the time. There's something about being a bartender. All the boys want to be you, and all the girls want to be with you. Sometimes the boys want to be with you as well.Nothing wrong with that! If you spend all your nights in the bar, what do you do during the day?Read, write, hang out with friends and go to the beach. I also cook a lot. 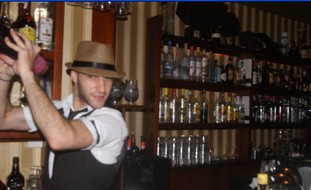 Photo: Yoni CohenDo you have any tips for anyone that wants to be a bartender?First off, it's all about the customer. Always make sure that the customer is comfortable and gets what they want. Service is very important.
What do you think it takes to be a good bartender?You need to be a social person. You need to know when to speak with the customers and when to leave them alone. You also need to have an immense knowledge of alcohol and flavors.223 is introducing a new summer food menu as well as an updated cocktail menu. 223 Rehov Dizengoff, Tel Aviv.Open 7 p.m. till 4 a.m. everyday. Phone: 03-5446537.