Ask the barman: It's hard being everyone's 'Mate'

When not charming the tourists in his gentlemanly British accent, Dor Tumarkin can be found hard at work behind the bar at one of Florentine's hottest nightspots.

By YONI COHEN
Barman Dor Tumarkin
(photo credit: Yoni Cohen)
Advertisement
The Tel Aviv bar scene has its fair share of laid back places to grab a pint of beer with friends, and "Mate" in Florentine is up there with some of the best. Dor Tumarkin is one of the local barmen that can be found pulling pints and charming the customers at all hours of the day. His great people skills have helped him become an established bartender on the Tel Aviv scene. After a long shift, he took some time to answer a few questions (in a perfectly charming British accent) about where he learned to make drinks and who his ideal drinking partner would be. How did you get into bartending? 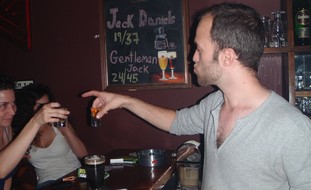 Dor Tumarkin
Five years ago I finished my army service and I took a bartending course. It was like a miniature career and it really built up my confidence. Where did you learn to the trade?The course is rudimentary and is very enriching and interesting at the same time. The trade you pick up on the job. You really need to specialize. Pubs and clubs are very different. What is the craziest night you have ever had?Once I had a bachelor and bachelorette party at the same time. They were the same couple and they did not want each other to miss out on the other's party. There were both male and female strippers who danced together. Let's just say that it got very interesting. Who is the most interesting customer that has ever sat at the bar while you were working? 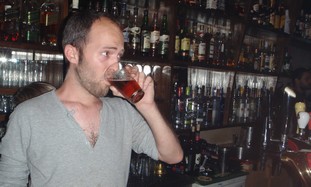 Taking a break on the job
The most interesting person can be someone that sits down at the bar and explains complicated physics. One guy came in and sat down at 5 a.m. to explain the ins and outs of computer science. What is the strangest thing that has happened to you on the job?One night about three years ago at the end of a shift there was a woman who came in drunk and started flirting with me. She proceeded to jump me and I had to pry her off. What does it take be a bartender?It doesn't take more than flexibility. You don’t really need to like cocktails to recommend them. You need to be a people person. What is your favorite drink to make? 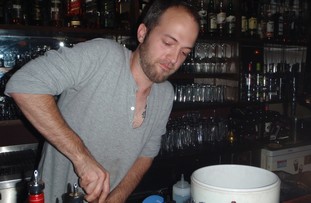 Hard at workWhiskey smooth. What is the best tip you've ever gotten?I once got a 200 percent tip.Who would be your ideal drinking partner?Anyone who can hold their liquor and hold a conversation.  Actually, maybe Harrison Ford. How many people a night try to hit on you? 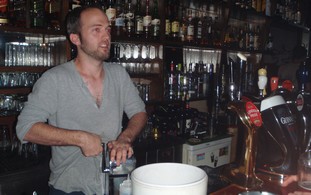 It is not quantifiable. I have been in a relationship for the past 5 years. But I have to give a number then I would have to say 3 or 4 a night. Any tips for those looking to be a bar tender?You need patience because you really need to understand people. You need to be able to hold a conversation, which is part of the fun. You need to be a bit of blabber mouth and know to drink.Mate Bar, 2 Vital Street Florentine. Open every day from 4:00 p.m.  The pub also has two other branches at 226 Dizengoff Street, 11 Lincoln Street. Telephone: 1 700 500 369.