Working behind this fully stocked bar, which is built around a large impressive tree, Nimrod Yona never stops smiling as he serves some of his favorite drinks.

By YONI COHEN
AUGUST 16, 2011 18:13
Barman Nimrod Yona 311
(photo credit: Yoni Cohen)
Advertisement
Walking into Vicky Cristina at “The Tahana” near Jaffa really is like walking into a movie. This trendy Tapas and wine bar has a distinct Barcelona theme, yet barman Nimrod Yona adds an Israeli charm. Working behind the fully stocked bar, which is built around a large impressive tree, Nimrod never stops smiling as he serves some of his favorite drinks, which include whisky and Arak. As well as bartending, Nimrod is a DJ, so he is constantly going to the best parties to show off his skills. He took some time out from behind the bar to talk about why it’s always important to smile and what drink he would serve Bob Marley if he could.
How did you get into bartending?I’ve loved alcohol since I was little, and I needed some quick money. I did a course before I started the army and took it from there. What is the craziest night you’ve ever had? 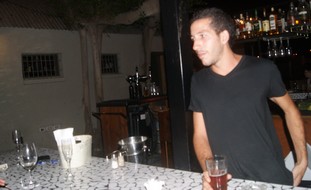 Photo: Yoni CohenWe had a party here on Independence Day and there was loads of drinking going on. I was closing up the bar and I broke a fridge because I was too drunk, and happy. So are you always happy?Yes, I think it’s important for a barman to always be happy and smiling. Who would be your ideal person to come and sit at the bar while you are working?Pep Guardiola has already sat at this bar. Who?Pep Guardiola, the manager of Barcelona FC. What did you serve him?Very good red wine.Which other famous person would you really want to serve?I would serve Bob Marley. 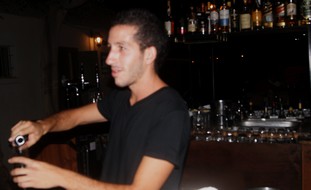 Photo: Yoni CohenWhat would you serve him?Arak Eshkoliot (grapefruit). I would tell him that this is the Zion way. The real drink of Israel. What’s your favorite drink to serve in general?A single malt. Everyone says that. Why?It’s the most expensive drink you can give someone and they are usually very happy. I like scotch so that’s why I like to serve it, especially to people who don’t know much about it.What’s the best tip you have ever received?A hundred dollars. What did you do to get that?I gave them service with a smile.Do you yourself drink a lot during a shift?Of course, I’m drunk every night. So it’s a dream job then?Maybe. I don’t know if my body will keep functioning with this rate of drinking but I do sports. 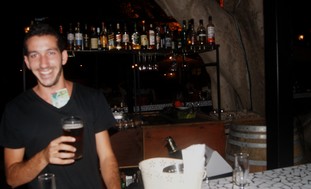 Photo: Yoni CohenDo a lot of people try to hit on you during the night?The girls?
The girls and boys?Yes [long pause] Would you care to elaborate?Yeh – I told you it’s the dream job. It’s usually tourists who hit on me. Any advice for someone that wants to be a barman?Just be relaxed. If you spill red wine on someone and you are relaxed then they will take it much better but if you get anxious, then they will feel it. I have had a lot of accidents while working here but I always smile and then everything is okay. Vicky Cristina, "The Tahana", Tel Aviv.
Open 12 p.m. until the last customer leaves.
Not Kosher
03-7367272