Salad 370
(photo credit: Thinkstock/Imagebank)
Advertisement
Kassandra Grunewald is the Co-Founder of TasteTLV. TasteTLV is the ultimate culinary guide for dining in Tel Aviv.Upon first glance at Israeli cuisine it's clear that fresh produce is not hard to come by. A typical Israeli salad (cucumber, tomato and onion) usually accompanies most dishes at restaurants throughout the country, and can be consumed for dinner, lunch, and even breakfast. A little harder to come by, as a newcomer to Tel Aviv, is a more familiar salad. Hailing from the United States and a lover of raw foods, I pride myself in enjoying a salad that not only fills nutritionally but also satisfies. The following are some noteworthy places that extend well beyond the borders of finely chopped cucumber, tomato and onion.1. Salad Bar - Café Birnbaum 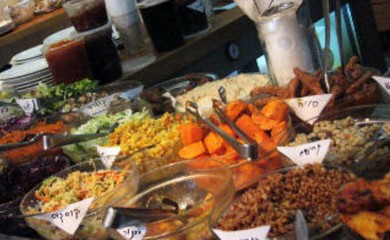 Cafe Birnbaum (Nataly Safir)
Beet salad with toasted pumpkin seeds, quinoa salad with carrots, raisins, and a dash of cinnamon, pasta with sweet potato and a rich tomato sauce, added to a healthy serving of a delectable quiche. Welcome to Café Birnbaum, where you can expect a whole lot more than some lettuce, tomato and cucumber! Café Birnbaum has taken pride in creating unique and hearty vegetarian dishes for its eclectic diners since 1969.As soon as you walk into this place it's understood that you are able to create your perfect meal, or that salad you are craving. On display is an extravagant salad buffet with overflowing bowls containing all of the ingredients you can imagine to create an amazing salad. All this for around NIS 45. When you realize you are welcome to have seconds or even thirds, you can honestly believe you are in vegetarian oasis. Insider Tip: Save room for some of the mouth watering desserts such as the diverse collection of homemade cakes and pies to die (read: live) for.Nachalat Binyamin 31(03) 560 0066Hours: Sun-Fri 6:30 a.m.till 4:00 p.m.Cuisine: Buffet, Vegetarian, DairyKosher2.  Cinema Paradiso - Lilush Panini 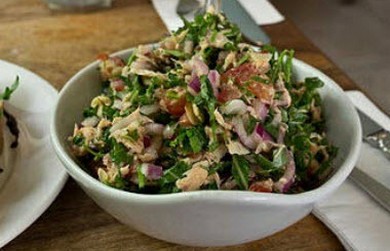 Lilush Panini (Shira Nanus)
Cinema Paradiso is a green salad with marinated beetroot, walnuts, and Feta cheese. You can find this special treat on the quiet block of Frishman, in a small, cozy open-air café that buzzes with locals in search of a delicious meal. Tables spill out onto the sidewalk, their counter tops colored with fresh pastas and salads as diners toast to a long day. Over glasses of tantalizing Sangria, they dip spoons into bowls of sweet potato or lentil soup. While her background is in gourmet, restaurant owner Lilush wanted a restaurant that focused on local, basic ingredients with sophistication. “I dream about the food,” Lilush says. "And before [a dish] comes to the table it takes me five times to bring it to life.” She knows her customers choose Lilush for their respective favorites on the menu. “I come in the evening and stand outside, smoke my cigarette and watch everybody ever so happy, drinking, eating, and talking. This is my pleasure,” Lilush explains. “I like what I can do to enhance people’s lives with food.” While Lilush Panini is recommended for all sorts of dishes, the beet salad is definitely a dish that will keep you coming back.Insider Tip: Whenever I am looking for a home meal without taking the time or energy I’ll order ahead and pick up a meal from Lilush Panini to bring home. Hits the spot every time.Frishman 73                                        (03) 529 1852Hours: Mon-Thurs & Sat 8 a.m. till midnight, Fri 8 a.m. till 5 p.m. Sun ClosedCuisine: Meat, Milk, Fish, and Veggie optionsNot kosher3. Greek Salad - HaPizza 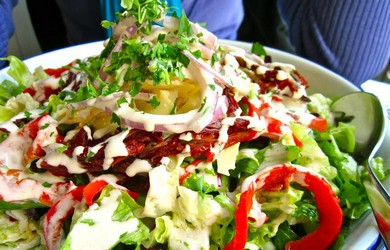 Greek Salad - HaPizza (Zoe Jick)
Four Years ago, Yariv Hadaro and his wife opened HaPizza after a decade of perfecting his pizza recipe.  Hapizza began as a small venture with only a tiny kitchen and few customers. Yariv remembers the intimacy of HaPizza’s humble beginnings: “My wife would make a salad, walk around the counter and bring it to the table. I made the pizza. Everyone could see us making the food and then we would serve it.”The dishes are purposeful; a testament to authentic Italian cooking.  I personally crave a Greek Salad with my slice, because I love the contrast of the delectable, scrumptious and surely the best pizza in Israel (in my very humble opinion), with the fresh, bold flavors of a Greek Salad. What to better soak the crispy crust with than the salty Mediterranean flavors of the Greek Salad dressing? So, next time you’re passing by- don’t look past the demure blue awning, stop in for a meal and surely you’ll become one of the regulars.Insider Tip: The Tehina & Roasted Red Pepper Salad at HaPizza is equally delicious. The ingredients used are the freshest and zestiest around, creating some of the most mouthwatering salads this side of the Mediterranean. Bograshov 51(03) 528 1077Hours: Sun - Thurs 11:30 a.m. till midnight, Fri 11 a.m. till 17 p.m., Sat 18 a.m. till midnight.Cuisine: Italian, no meat4. Green Papaya - The Bun 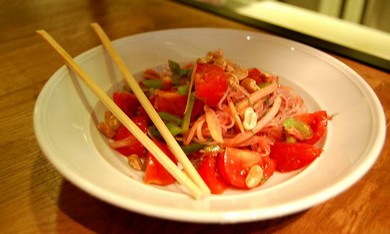 Green Papaya - The Bun (Taste TLV)
If you are craving something different, yet still authentic, but not sacrificing quality then check out The Bun. The chefs, brothers Shei and Ayal, showcase an intuitive understanding of seasoning, creativity and timing. What ever you fancy off the menu you can be sure the dish beholds the highest level of maturity. The green papaya is one of the many dishes exemplifying defined flavor, balance and texture. Vermicelli noodles are mixed with fresh tomatoes, strands of green papaya, green long beans, and crunchy peanuts, all topped with a fresh plum som tam sauce. The slippery noodles are in perfect balance with the soft, acidic tomatoes and oily, crunchy peanuts. The flavor balance of acid, hints of cilantro and soft sweet plum make this dish deliciously well rounded. As we will suddenly find ourselves in the thick of summer here, I couldn't imagine a more perfectly satisfying salad amongst the heat of the Tel Aviv summer.Insider tip: Don’t leave without trying at least one of the "buns." (Restaurant closed during Passover.)18 Hillel Hazaken(03) 604 4725Sun-Thur: noon till 11:30 p.m.,  Fri: noon till 5 p.m., Closed SatCuisine: Modern Pan-Asian CuisineNot kosher                 5. Salad Bar - Buddha Burger 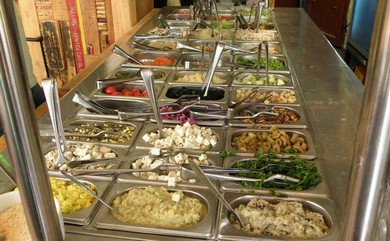 Salad Bar - Buddha Burger (Taste TLV)
Aside from the inspiring salad buffet, the menu itself suggests over 10 mouthwatering salads bringing together textures and flavors only Arie could imagine. Arie, the founder of Buddha Burger, moved to Tel Aviv from Austria at the young age of 23 and found it difficult to maintain his vegetarian lifestyle based on sprouts and legumes. After a few years in the big city, Arie met young Israelis who were interested in becoming vegan but didn’t know how to begin the dietary switch in a healthy way. Arie opened the original Buddha Burger in 2006, making every burger patty by hand the evening before. In Buddha Burger’s first two years of business, the establishment has already garnered a reputation of never sacrificing taste for healthy, vegan ingredients. Try the Legume Salad or the Seaweed salad if you are in the mood for something creative. Between the burgers, burritos, salads, stir-frys, and shakes, even the most avid meat eaters among us can be impressed by Buddha Burger’s creativity in presenting a wide array of satisfying, flavorful and substantial vegan meals. Insider Tip: There is also a franchise of Buddha Burger on Ibn Gvirol 86 that has a great salad bar where you pay by the ingredients’ total weight. Both places deliver.Yehuda HaLevi 21                     (03) 510 1222                            Hours: Sun-Thur: 11 a.m. till midnight, Fri: 11 a.m. till 5 p.m. Sat: One hour after Shabbat goes out till midnight. Cuisine: Vegan, Juice BarNot kosherKassandra Grunewald is a co-founder of TasteTLV.com. She has been an avid foodie since she can remember making meals out of dandelion leaves and sand in the backyard for her guests.Follow @JPost_Lifestyle