The Passover Seder is reminiscent of a Roman banquet, and we are expected to drink no less than four cups of wine.

By ADAM MONTEFIORE
Wine
(photo credit: Courtesy)
Advertisement
My earliest wine experience (apart from my brit mila, which I don’t remember) was at a family Seder night. I eagerly sipped glasses of Palwin, a kiddush wine ﬁrst produced in the 19th century, which will be familiar to anyone from Britain. I am embarrassed to admit, given my position in the wine trade today, that I quite liked it as a child. It was sweet, syrupy and alcoholic. It made me feel grown up to drink wine and gave me one early reason for “why this night was different” from all others. It was not the ﬁrst great wine that led me to a career in wine, but it was an introduction to wine of sorts.The Passover Seder is reminiscent of a Roman banquet, and we are expected to drink no fewer than four cups of wine. In a banquet today, if four wines are served, there is a standard order that is often followed. A sparkling wine will be served as the aperitif, and a white wine will be served with the ﬁrst courses. A red wine will be poured with the main course, and a dessert wine will be served with the desserts or as an after-dinner drink.Those who want to replicate this formula may easily do so for the four cups, the arba kossot. The ﬁrst cup is the aperitif, opening the proceedings. The second cup is taken before the meal, and it is possible to continue with this during the ﬁrst courses. The third cup is taken after the meal. So your red wine may be opened with the main course.And if you don’t drink it all, its use may be extended to the third cup. It ﬁts rather well.The fourth cup provides a sweet ending to the evening.My Israeli family is small and very wine oriented. So for me, Passover is a wine festival no less than the Festival of Spring, Freedom or Unleavened Bread. My children ask what wine we are having for Seder night long before the food is discussed. I get some family heirloom decanters out, and I take it as an opportunity to taste some special wines. Last year, we had a vertical tasting from Yatir Winery (tasting Yatir Forest from 2000 to 2008). This year we are doing a tasting of Syrah and Shiraz wines.A previous year we opened old vintages of Bordeaux-style blends, including Carmel Limited Edition, Castel Grand Vin, Yarden Katzrin and Yatir Forest.It is possible to select your four wines according to a theme. Your choice may be governed by a certain grape variety, a specific wine region, the wine style or any other parameter you wish to choose. A Seder with like-minded wine lovers, as well as the beneﬁt of a small gathering, is an excellent opportunity to have a memorable wine experience! Of course, I fully understand that I live in wine la-la land, and most people don’t have the luxury of serving the ﬁnest wines. The majority of guests in a large family will not be wine connoisseurs and may not even be wine drinkers. A fair percentage of them may drink out of necessity for the Seder but maybe not by choice. In this instance, save those good bottles and buy wines that will appeal to the lowest common denominator.At least try to give everyone as good a wine experience as possible. A sensible approach in this instance would be to focus on semi-dry white wines and soft, fruity red wines.The main question for debate is always over the ﬁrst cup. Some prefer to serve the ﬁnest wine for the ﬁrst cup because this is the one associated with the most important blessing. Other people may prefer something sweet either due to tradition or because they are wary of drinking on an empty stomach. Some families choose to use grape juice instead of wine. However, I believe that a measure of alcohol is part of the festival.For those who want innovative choices that will satisfy people who prefer the traditional approach, I would recommend two wines. One is the Hallel Semi Sweet Kiddush Wine made from Merlot grapes.The other is the Young Selected Carignano.Both are red, demanded by the purists. Both are more wine-like than the usual kiddush wine and certainly a great deal less sweet.The Carignano is also low in alcohol and slightly frizzante (sparkling). What could be better as a family wine? Whatever level you are buying for, there is no better place to go these days than a supermarket. Whether you are introducing your children to the mitzva of drinking wine, a wine connoisseur preparing a wine event or are purchasing for a large group, it really is a buyer’s market. Before Passover, the prices are at their lowest and promotions are at their most attractive.I never suggest buying the cheapest of anything because most wines have reasonably ﬁxed packaging costs (bottle, cork, capsule, etc). Therefore, the difference between a wine that costs NIS 25 and one that costs NIS 50 is the quality of the liquid inside the bottle. For this reason, the least expensive wine is rarely the best value. However, I certainly recommend aiming for the “three bottles for NIS 100” category, where there are some really worthwhile bargains. Carmel Ridge (Reches), Mount Hermon, Galil Mountain, Private Collection, Recanati Yasmin and Tabor Har are in this price range.This is the price point where value meets quality, and there are some great bargains at these prices.Adam Montefiore works for Carmel Winery and regularly writes about wine in Israeli and international publications. 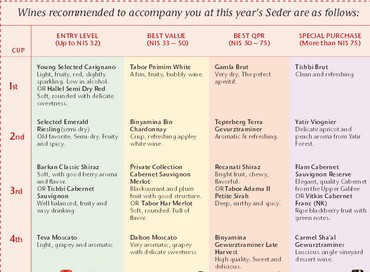