Despite the BDS referendum being overturned, Fried has taken legal action because he believes that this was not enough to be a long-lasting solution.

Jonah Fried, a Jewish student at Montreal’s McGill University has sued the school along with Students’ Society of McGill University (SSMU) and the Solidarity for Palestinian Human Rights McGill (SPHR) over an anti-Israel student referendum held last spring.

The referendum, which was held from March 15-21, was titled “Palestine Solidarity Policy.” If passed and enacted, it would have caused SSMU to make “a statement on Nakba Day, reaffirming the SSMU’s solidarity with Palestinian students and with Palestinian liberation from settler-colonial apartheid,” boycott any entity “complicit in settler-colonial apartheid against Palestinians” and divest from such entities and form a Palestine solidarity committee, among other things.

Some 2,294 students (71.1%) voted in the affirmative, while 931 (28.9%) opposed the policy, according to an application originating a judicial proceeding that Fried’s lawyers submitted to the Quebec Superior Court on July 22. Notably, less than 10% of eligible students voted in the referendum.

“I've been told to ‘go back to Long Island’ just because I'm Jewish and pro-Israel.”

McGill deputy provost Fabrice Labeau criticized the referendum in an email to students on March 24 and argued that it violated SSMU’s constitution. Labeau threatened to terminate the memorandum of agreement between the university and SSMU if remedial action was not taken, which would cease all funding that SSMU receives from the university and prohibit the student society from using McGill’s name.

SSMU’s board of directors ultimately declared the policy unconstitutional. Nevertheless, SPHR, which promoted the Palestine policy, is reportedly attempting to reintroduce it, the court application stated. 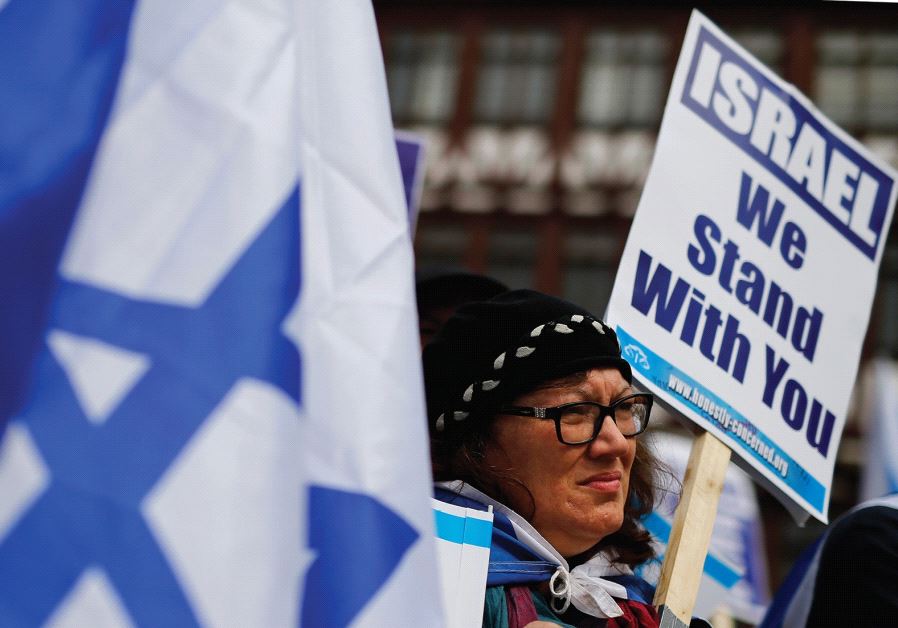 NO ROOM for this message at McGill? (credit: REUTERS)

Fried is grateful to have the financial backing of B’nai Brith Canada’s Legal Defense Program and legal representation from Michael Bergman. He has demanded a declaratory judgment stating that the referendum does not lead to any rights, obligations or actions; the Palestine Solidarity Policy is inconsistent with SSMU’s constitution and by-laws; the memorandum of agreement prohibits SSMU from enacting the policy; and the policy is “discriminatory, biased and antisemitic.”

B’nai Brith Canada CEO Michael Mostyn said in a press release, “We’re standing up for this Jewish student, and through him, all Jewish students on campus who feel unsafe and unwelcome as a result of continued anti-Israel referendums by their student society. It’s inexplicable that McGill would allow one anti-Israel referendum after another and continue to fund activities which are in violation of its own policies. In doing so, it is participating in creating an antisemitic environment.”

Despite the Palestine policy being overturned, Fried has taken legal action because he believes that this was not enough to be a long-lasting solution.

“I’ve been told to ‘go back to Long Island’ just because I’m Jewish and pro-Israel,” he told The Jerusalem Post. “I was also accused of ‘getting paid by the Israeli government’ just because I disagree with SPHR. Scandals like the winter referendum have happened too many times now, and we’ve already passed policies against this form of antisemitism. It is time for McGill to enforce them.”

A declaratory judgment that includes the plaintiff’s demands would achieve several goals, Bergman said. Among the purposes of the suit are “to assure Jewish students that they have individual rights to repel antisemitism on the McGill campus; to confirm that anti-Zionist policies are contrary to the SSMU constitution, by-laws and policies; to confirm that the SPHR is an antisemitic propaganda vehicle; and to declare that McGill has an obligation to remove antisemitism from its campuses.”

“We’re standing up for this Jewish student, and through him, all Jewish students on campus who feel unsafe and unwelcome as a result of continued anti-Israel referendums by their student society.”

History of discrimination at McGill

McGill has a long history of antisemitism on both the administrative and student levels. The university had an unofficial quota on Jewish students in the early decades of the 20th century, which was a common practice at the time.

Although the university has anti-discrimination policies that should stop these incidents from occurring, Fried argued that they are not adequately enforced.

“We have passed all of the policies we could,” he said. “We want the court to declare that these policies actually mean something, and that McGill has an obligation to enforce them.”

SPHR is the only defendant that has commented on the matter.

“The SSMU board of directors already overturned the Palestine Solidarity Policy in April, due to pressure from the McGill administration, despite the policy having been endorsed by 71% of student voters,” the organization remarked in a statement, per the Montreal Gazette.

The group continued, “The explicit purpose of the lawsuit is simply to punish McGill students for engaging in anti-colonial politics, and constitutes the latest desperate attempt to crush the rising, overwhelming support for the Palestine solidarity movement at McGill and beyond.”