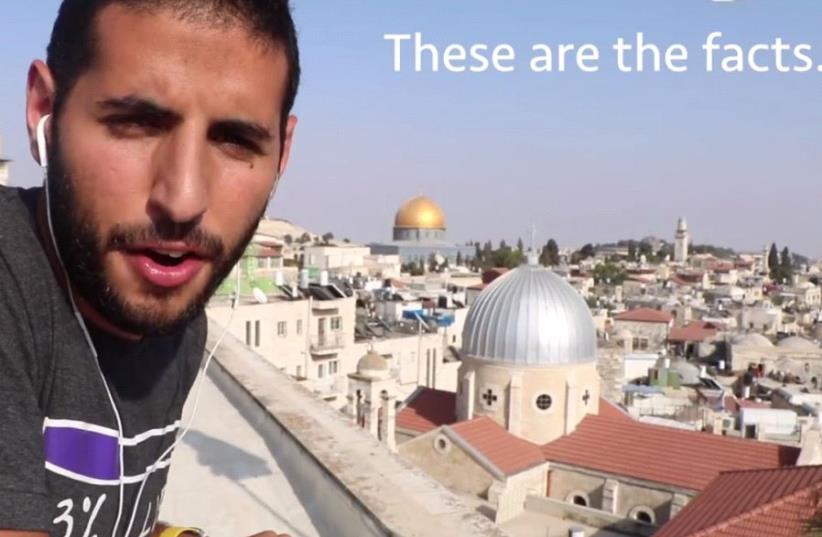 Nuseir Yassin.
(photo credit: FACEBOOK SCREENSHOT)
Advertisement
The Facebook star who has launched a thousand viral videos has created one more – this one speaking out against the movement to boycott Israel.Nuseir Yassin, an Israeli-Arab native of Arrabe in the Lower Galilee who goes by “Nas Daily” online, posted a video Sunday about Kuwait Airlines stopping him from flying from New York to India.“Because I’m an Israeli, an entire airline is not allowed to take me on their plane even if I’m not going to Kuwait,” he said in the video. This behavior, he said, is discriminatory and “should be illegal.” Yassin, who quit his job in New York in 2016 and decided to travel the globe, posting one-minute videos daily, said the “stupid ban is pure politics.”“Dear Kuwait: If you want to boycott Israel, be my guest, refuse me service,” he said. “But also give me your USB flash drives, your phones, your safe-driving cars, your Viber, your Waze or your anti-virus – this is also Israel.”Yassin said those who seek to boycott the State of Israel prove that they really don’t get it at all.“If you want to boycott Israel because of Palestine, I don’t think you actually care,” he said, “because you’re also boycotting two million Muslim Palestinian Israelis.After just 24 hours, his video on the topic had already been viewed more than 300,000 times. Yassin returned home to Israel in July, and held a Meetup meeting then in Jerusalem for Jewish and Muslim fans of his Facebook journey. At the time, he told The Jerusalem Post that he wanted to bring together regular people who think we can all get along.“It seems like the whole world is either with Israel or with Palestine,” he told the Post at the time. “It seems like there is nobody that is actually in the middle, because the only loud people are the ones in the extreme.”