Organizations on the anti-BDS frontlines

The of Strategic Affairs Ministry is working closely with several pro-Israel organizations in the fight against the Boycott, Divestment and Sanctions movement. 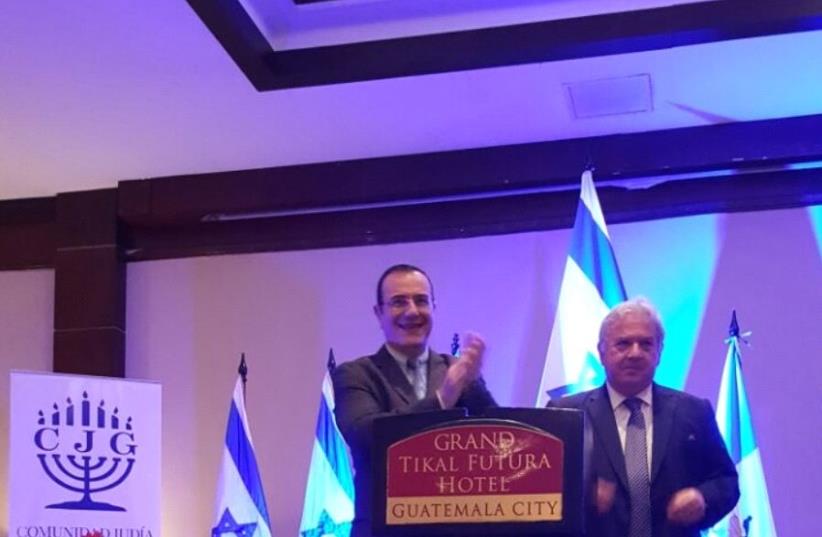 Maccabi World Union head Carlos Tapeiro, speaks in Guatemala, 2017
(photo credit: MACCABI WORLD UNION)
Advertisement
In many ways, the Boycott, Divestment and Sanctions movement got a head start when it comes to shaping the debate surrounding the Israeli-Palestinian conflict. It painted a compelling narrative of Palestinians as the helpless victims and Israel as the ruthless aggressor, when the reality is far more complex.The Jerusalem Post spoke to organizations working hard to combat the rhetoric that BDS espouses. In driving campus activism, working with (and at times, against) social media platforms, they are spearheading legislation to wrest back control of the pernicious and pejorative narrative.‘Changing hearts and minds on college campuses’ David Brog, executive director of the Maccabee Task Force. When David Brog speaks in his uniquely Texan drawl, it is clear that Jewish advocates for Israel can come from the most unexpected places. And Brog, who served as the executive director of Christians United for Israel before being tapped by Sheldon Adelson to head the Maccabee Task Force, has spent over a decade being a stalwart for the Jewish State.Maccabee Task Force staffersMTF works with students and Jewish professional leaders on how best to counter the BDS threat which has thrived on college campuses as of late. In a “no apology” motto spread across campuses nationwide, MTF tells students to focus on the moral good Israel has to offer without issuing any qualifiers.“That narrative of Israel as the source of the conflict is so widespread that it’s impacting pro-Israel students, who say, ‘I’m sorry about Israel, I’m sorry about its policies, but Israel is not all bad,’” he said.“We believe that Israel actually has a very powerful story to tell and we need to start with a position of reclaiming the high ground. We don’t believe that we need to start off with an apology.”MTF treats the students as power-brokers able to enact serious change. As such, since its launch in 2015, at the beginning of each academic year, they meet with pro-Israel students on campus and Jewish professionals, like Hillel members, Chabad rabbis and Israel Fellows, who brainstorm ideas. Subsequently, MTF also brings to the table other promising initiatives proposed by other campuses. “We bring to them the best ideas we have from other campuses, so we’re able to cross-pollinate the best ideas each year,” he explained.Some are simple, like a Shabbat dinner with members of African-American or Hispanic students. Some, though, are more elaborate and costly, like a trip to Israel with leading “non-Jewish influencers” on campus who are able to see Israel for themselves.“If you want to influence the campus, you have to go beyond the pro-Israel community and you have to fight for hearts and minds of those active in campus debates,” he said.Brog is quick to note that there is a way to criticize Israel without venturing into antisemitic rhetoric. “It is not antisemitic to criticize Israel. Most Israelis do it once a day, if not once an hour. It is antisemitic to criticize only Israel,” he said. “There’s only one country on God’s green earth they want to divest from and it’s the Jewish state.”

‘Building a community to fight against a ‘hate movement’ Shoham Nicolet, Founder and CEO of the Israel-American Council Slowly but surely, the IAC is working to create cracks in the BDS armor. Through legislation, social media and coalition building, the organization is doing what it can to prove that BDS is not a political movement, but a “hate crime,” its founder and CEO Shoham Nicolet said.IAC head Shoham NicoletThere are a number of new developments in recent weeks that are examples of IAC in action. Chief of among them is legislation passed in Nevada in early June that prohibits the state from doing business with anti-Israel groups. Additionally, during the pro-Israel parade in New York City a couple weeks ago, the IAC, along with the Ministry of Strategic Affairs and the Interdisciplinary Center in Herzliya launched an app that targets antisemitic and anti-Israel content by relying on a grassroots network of users to urge social media platforms to take the offensive content down.“It’s been a very exciting time,” Nicolet said of the progress being made.For IAC, an organization that represents Israeli-Americans, BDS is not only an Israel issue, but an American one as well, because it threatens the American belief of tolerance and respect for all.“It’s very easy today to see the slippery slope from discussing Israel to antisemitic comments,” he said.”When you also look at the profile of the people posting [antisemitic content], and the leadership standing behind this movement, you find many activists that are basically anti-American and anti-democracy.”Nicolet argues that the BDS threat and Israel’s very real PR problems should be treated as separate issues and conflating the two is misguided. To counter its image problem, the IAC supports the aforementioned Israel festival which hosts about 50,000 people annually and education programs that teach young people about the history of Israel.But those programs are separate from the strategic moves to cut the BDS movement at its knees.“I think it’s time to separate that BDS is really a hate movement and the other issue is Israel’s image, and there’s many ways to help that. I think the two should be treated in two different ways,” he argued.But at the end of the day, the IAC’s secret weapon is that it uses the Israeli mentality to tackle the BDS issue.“The Israeliness we have allows us to bring innovation to fighting BDS, we bring entrepreneurial thinking around it in a result-oriented, pragmatic way,” he added.

‘The best kept secret in the Jewish world” Rabbi Carlos Tapiero, deputy executive director, director Education Department, Maccabi World Union Maccabi World Union is perhaps most associated with fostering a culture where Jews and sports are intertwined. But this Zionist organization – which reaches 70 countries – is much more than a platform for showcasing Jewish athleticism.Since 2009, the organization has been heavily involved in fighting against the delegitimization of Israel by reaching out to members of the Jewish community who are drifting away from their heritage and also through connecting with Christian communities interested in learning more about Israel today, Rabbi Carlos Tapiero, its deputy executive director, explained.It tackles this big problem though a number of influential programs.For example, its Future Leaders Forum is a group of young people aged 18 to 37 who hail from Europe and are passionate about Israel and sports. They meet all around the continent to engage in pro-Israel activities.And coupled with its partnership with BBYO (B’nai Brith Youth Organization), the Maccabi World Union is the largest Jewish youth movement in the world – reaching 150,000 youths worldwide, Tapiero boasts.It is also the only Jewish organization chosen by the Strategic Affairs Ministry to run an elaborate pro-Israel advocacy campaign, he said. That campaign, called Israel Ambassadors for Truth, holds seminars around the world to advocate for Israel and fight against BDS. Under the leadership of Gilad Erdan, the ministry has shifted its focus from straightforward hasbara to a proactive campaign against the delegitimization of Israel.Tapiero recently arrived from Guatemala where he hosted a seminar with 300 Christian pastors who were eager to learn how to fight on Israel’s behalf.“BDS is the big liar. Naive people think they’re looking for peace. If you care about the destiny of the Palestinian people today, why don’t you denounce all human rights violations in Gaza?” he asked rhetorically, underlining the overall hypocrisy he believes governs much of the BDS campaign.“We don’t want to speak to the fanatics like [Pink Floyd frontman and BDS activist] Roger Waters – whose life is so void, he needs something to live for – but there are so many good people who are confused by general lies of the BDS.”Despite its wide outreach and the people they connect with, however, Maccabi World Union keeps its activities on a low profile.“We’re to blame, but we don’t care so much [about publicity]. We’re too focused on accomplishing things,” he said, explaining the lack of fanfare surrounding its projects.“We’re the best-kept secret of the Jewish world.”

This is the first installment of a two-part series.This article was written in cooperation with the Strategic Affairs Ministry.
Advertisement
Subscribe for our daily newsletter