Radiohead was not swayed. 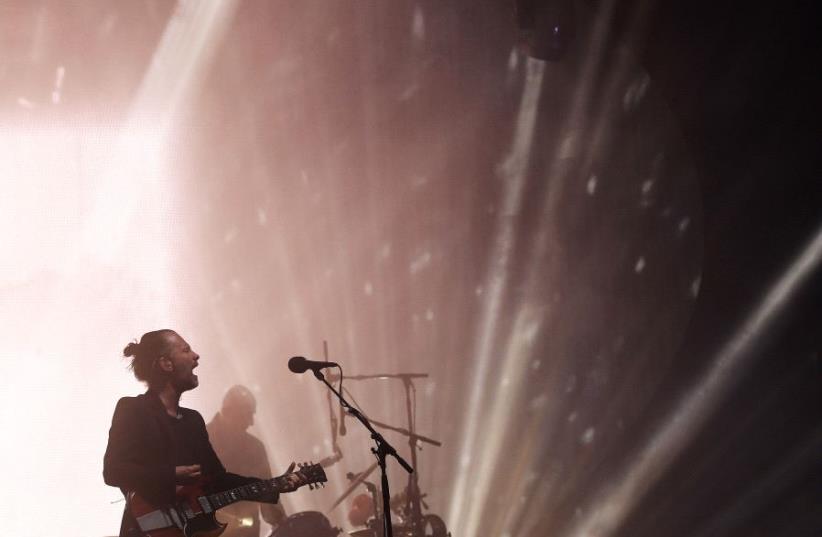 Radiohead performs on the Pyramid Stage at Worthy Farm in Somerset during the Glastonbury Festival in Britain, June 23, 2017.
(photo credit: DYLAN MARTINEZ/REUTERS)
Advertisement
Rock legends Radiohead were harassed by pro-Palestinian hecklers during their set at Glastonbury Music festival on Saturday, photos from the Facebook group "Radiohead fans for Palestine" depict.The protestors were pressing for Radiohead to cancel their upcoming performance in Tel Aviv, slated for July 19."We're at Glastonbury Festival's Pyramid State getting ready to tell Radiohead to respect the boycott and #CancelTelAviv," one photo caption read.Another image showed protestors holding Palestinian flags and a banner that read, "Good times had by all just swallow your guilt and your conscience" followed by the dates 1948-2017, the length of the existence of the modern State of Israel, and "Israel is an apartheid state. Radiohead, don't play there."It would seem that the protest was small, as The Guardian's review of the performance mentions their rendition of their hit "Creep," but doesn't mention any public unrest.Earlier this week, members of the UK activist group London Palestine Action protested outside the office of Hardwick & Morris, Radiohead's accountant, according to Pitchfork. They held signs like "Radiohead: don't leave Palestinians high and dry," and "Karma police, arrest this man for his crimes against solidarity."In February, dozens of high-profile artists urged Radiohead to cancel their Tel Aviv concert, but earlier this month, in an interview with Rolling Stone, Radiohead singer Thom Yorke responded with ire to their attempts."I’ll be totally honest with you: this has been extremely upsetting. There’s an awful lot of people who don’t agree with the BDS movement, including us. I don’t agree with the cultural ban at all, along with J.K. Rowling, Noam Chomsky and a long list of others," Yorke said."It’s deeply distressing that they choose to, rather than engage with us personally, throw shit at us in public," he continued. "It’s deeply disrespectful to assume that we’re either being misinformed or that we’re so retarded we can’t make these decisions ourselves. I thought it was patronizing in the extreme. It’s offensive and I just can’t understand why going to play a rock show or going to lecture at a university [is a problem to them]."