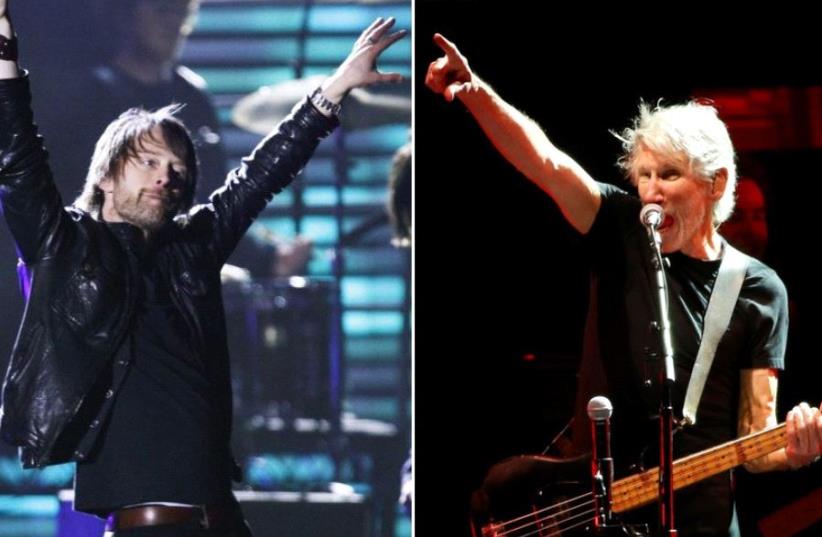 Radiohead frontman Thom Yorke (L) and Pink Floyd's Roger Waters
(photo credit: REUTERS)
Advertisement
It’s Pink Floyd vs Radiohead – at least when it comes to performing in Israel.A few days ago, Radiohead lead singer Thom Yorke, in a Rolling Stone interview, defended his upcoming show in Tel Aviv, responding to Boycott, Divestment and Sanctions activists urging him to cancel.But on Monday, also in Rolling Stone magazine, Roger Waters, one of the most prominent artists to call for a boycott of Israel, hit back at Yorke.“I have made every effort to engage with you personally, and would still like to have the conversation,” Waters wrote. “Not to talk is not an option.”Waters added that “today is the 50th anniversary of the occupation of Palestine by Israel.... The BDS picket line exists to shine a light on the predicament of the occupied people of Palestine, both in Palestine and those displaced abroad.”In his interview, Yorke had expressed his frustration at the activists – more than 50 of whom signed a letter urging Radiohead to cancel.“It’s deeply distressing that they choose to, rather than engage with us personally, throw shit at us in public,” Yorke said last week. “It’s deeply disrespectful to assume that we’re either being misinformed or that we’re so retarded we can’t make these decisions ourselves. I thought it was patronizing in the extreme.”Waters, however, responded that he tried to engage Yorke directly in dialogue but was rebuffed.“I sent an email [in February] expressing my concern about Radiohead crossing the BDS picket line to perform in Israel.” Waters wrote. “A few hours later, Thom replied. He was angry. He had misinterpreted my attempt to start a conversation as a threat. So I tried again.”Radiohead has performed eight times in Israel in the past, most recently in 2000.Yorke said his bandmate, guitarist Johnny Greenwood, “knows most about these things... he has both Palestinian and Israeli friends and a wife who’s an Arab Jew.”The singer said it has been so offensive to all of them to hear all of the things people are saying, “just to assume that we know nothing about this. Just to throw the word ‘apartheid’ around and think that’s enough.... It’s such an extraordinary waste of energy, energy that could be used in a more positive way.”While the issue has been percolating for months, Yorke said he felt the need to speak out this week.“Part of me wants to say nothing, because anything I say cooks up a fire from embers,” he said. “But at the same time, if you want me to be honest, yeah, it’s really upsetting that artists I respect think we are not capable of making a moral decision ourselves after all these years. They talk down to us, and I just find it mind-boggling that they think they have the right to do that. It’s extraordinary.”