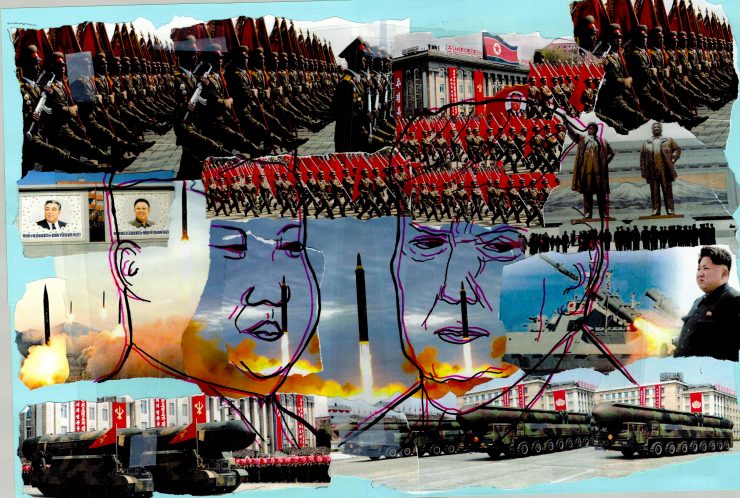 Illustration by Michael Anderson and Sam Ben-Meir.The prospective meeting between President Donald Trump and North Korea’s Chairman Kim Jong Un would be historic, and regardless of the outcome it will have major implications for years to come. The conflict over North Korea’s nuclear arsenals and ballistic missiles is complex. It is driven by a mindset seething with mutual suspicions and profound distrust between the US and North Korea, which dates back nearly seven decades and has profoundly prejudiced their ultimate intentions. North Korea has violated several agreements with successive American administrations to end its nuclear program, while the US maintained open hostility and made no secret of its desire to affect regime change. What has dramatically changed the dynamic of the conflict, however, is the convergence of four major developments that made it possible for Kim to invite Trump to negotiate an end to the conflict.

First, North Korea has succeeded in becoming a nuclear power, with a stockpile of such weapons large enough to deter any enemy, including the US, from using force to depose the North Korean dynasty with impunity. It has mastered the technology of intercontinental missiles, which provides it with a delivery system for nuclear warheads, and has concluded that it can no longer improve its position by prolonging the conflict. Having reached such a milestone, North Korea has changed the dynamic of the conflict, making it possible for Kim to negotiate from a position of strength.

Second, although the sanctions and international isolation have certainly played a role, they were not as decisive as the Trump administration is trying to project. Indeed, North Korea has suffered from the sanctions for many years, but has come to the negotiating table in the past for tactical reasons, seeking temporary relief from the sanctions only to resume the development of its nuclear and missile technology. Now, however, having become a recognized nuclear power, Kim is seeking a strategic change that would permanently lift sanctions to alleviate the economic hardship on his people and provide them with their basic and urgent needs, while demonstrating that the regime is delivering on its promises.

Third, by meeting President Trump for face-to-face talks, Kim would also be accorded the legitimacy he has been craving while ensuring that North Korea is treated with respect as an independent state among the community of nations. North Korea’s participation in the Winter Olympics provided the initial thaw between North and South Korea, and created the opportunity for South Korea’s President Moon Jae-in (whose country would be most affected under the conditions of war or peace) to broker a face-to-face meeting between Trump and Kim, to which the latter was already disposed to accept. Although the North Korean delegation (led by Kim, which is most unusual) traveled to China to keep Beijing abreast of developments regarding the pending summit and ensure its support, it is also indicative of Kim’s seriousness about reaching an agreement with the Trump administration.

Finally, as odd as it may seem, in the mutual public acrimony between Trump and Kim—the name calling, the insults, the threats and counter-threats coupled with their crude audacity and bluster—the two have found their match. Defiant, daring, and detested by the international community with overblown egos, both wanted to demonstrate that they can go against the political current and diplomatic niceties to achieve what their predecessors have failed to realize.

Pyongyang, however, will come to the negotiating table with a set of demands, including: the assurance that the US will recognize the North Korean regime as the legitimate government and not seek regime change; lift all sanctions without linking them to human rights; end military exercises with South Korea; substantially reduce and ultimately remove its military forces in South Korea; and sign a peace treaty once a comprehensive agreement is reached.

The main demands of the US are the denuclearization of the Korean Peninsula, which the Trump administration views as central to any agreement; that North Korea freezes further testing of ballistic missiles; immediately ends the development of miniaturized nuclear warheads that could be mounted on intercontinental missiles; and finally, re-joins the Non-Proliferation Treaty (NPT) and accepts the most unfettered monitoring regime by the International Atomic Energy Agency (IAEA).

Regardless of how well-intentioned both leaders may be to end the conflict, given the time constraints and the inability of either leader to deal with technological intricacies coupled with an environment completely lacking in trust, the prospective summit cannot and will not resolve these complex issues. Thus, neither side should have any high expectations to reach an agreement in short order. For North Korea and the US, the stakes are high, and the premature collapse of the negotiations could make matters worse, which both sides must avoid. At best, they can pave the way for substantive negotiations that would follow.

Secretary of State Designate and former CIA Director Mike Pompeo is certainly knowledgeable of Kim’s position and the nature of relations he wants to forge with South Korea and other states in the area. Although Pompeo is a hard-liner and extremely suspicious of the North Korean leader, he must seize this historic opportunity to forge a lasting agreement.

The wild card here is the appointment of John Bolton as National Security Advisor, who is known for his extreme views. He has advocated the abrogation of the Iran deal and the bombing of North Korea to destroy its nuclear arsenals, which could precipitate a horrific war and cause the death of hundreds of thousands of North and South Koreans, Japanese, and Americans, and potentially lead to a much wider regional war.

Pompeo, with the support of Secretary of Defense James Mattis, who deeply believes in a diplomatic solution and enjoys Trump’s confidence, must disabuse Bolton and persuade Trump that force against North Korea will invite disaster. Pompeo must, however, be realistic about what can initially be achieved, and build on it to reach a lasting agreement. For this reason, he must come to the negotiating table with the understanding that a transitional period of five to seven years will be necessary, during which both sides undertake confidence-building measures to nurture trust and reach interim agreements that deal with various aspects of the conflict, which will eventually lead to denuclearization.

Any initial agreement must meet both sides’ initial demands: for North Korea, the lifting of sanctions, albeit gradually, is a central issue, without which it will have no reason to enter any negotiation. For the US, the immediate cessation of any nuclear testing and freezing further development of its intercontinental missiles is the prerequisite to the continuation of the negotiating process.

The talk of war against North Korea, as Bolton has been advocating, must be removed from the lexicon because it is beyond insanity. The solution lies with diplomacy and diplomacy alone, which must be pursued especially now that the conditions to reach an agreement are more favorable than any time before.

The changing dynamic of the conflict in favor of Kim, and Trump’s aspiration to reach an agreement that his predecessor failed to achieve, offer a historic opportunity to end a 70-year-old conflict that neither leader can afford to squander.