Getting Real on North Korea

By DANIEL S. SMITH
AUGUST 8, 2017 18:19
Advertisement
For thirty-six years, our next-election oriented leaders have neglected the North Korean nuclear threat to our peril, while promulgating illusory sanctions, talks, urging China to act against it's own self-interests, diplomacy, hitting the banks etc. as if they comprised meaningful action. There naivety has been exposed in broad daylight, as under our close watch North Korea now claims to have built ICBM’s that can reach major US urban centers. Yet our finest diplomats and columnists have yet to learn from our mistakes and propose we do the same thing over and over again and expect a different result. It’s time to get real, and choose between going to war with North Korea or allowing them to develop a hundred nuclear-tipped missiles that can reach New York City.
In the early 90’s, Graham Allison advised Bill Clinton to take military action after the North withdrew from the Nuclear Non-Proliferationtreaty on March 12th, 1993. Clinton balked and negotiated the Agreed Framework, whereby North Korea agreed to freeze it's plutonium production in return for some badly needed economic relief. In 2000 Clinton met with Jo Myong-rok in the oval office and issued a joint communique. A few weeks later Madeleine Albright delivered a signed Michael Jordan basketball to Pyongyang, only to discover in 2002 that North Korea had been advancing a secret highly enriched Uranium program all along.

Then we tried the Six Party Talks, focused on a comprehensive solution worked out between China, Japan, Russia, South Korea, North Korea and the United States. Any efforts in this regard have and will always be fruitless, as the party's involved have diametrically opposed interests. After the 2006 North Korean missile tests, the UN imposed UNSCR 1695 and UNSCR 1718, which included China and Russia signing on to the sanctions. We mistakenly believed that these tests would encourage China to cut ties and squeeze Kim Jong-Il, but the sanctions they employed had virtually no effect in curtailing the DPRK’s nuclear advancement.

The Obama administration told us the best way forward was "Strategic Patience" which in effect meant total acquiescence. The result of his, Trump’s and their predecessors negligence has been:

“On July 4, 2017, North Korea conducted its first test of a two-stage Hwasong-14 ballistic missile, which reached an apogee of about 2,800 km. If flown on a standard trajectory, this means the Hwasong-14 would have a maximum range in excess of 7,500 km—intercontinental ballistic missile (ICBM) range—and may be able to reach the US west coast if armed with a warhead weighing 650 kg or less.” and “On July 28, North Korea launched a ballistic missile that reportedly flew for 45 minutes, reaching a peak altitude of 3,000 km, and a slightly longer range than the previous test.” (38 North) 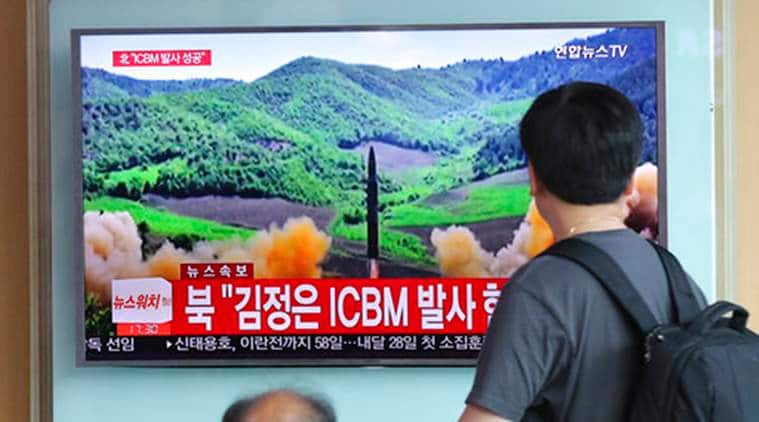 Yet countless officials, pundits and experts continue to put the onus on China, as Trump did on July 29th, or call for “talks” and sanctions, that though well-intended, will in no way stop Kim Jong-Un from advancing his ever improving nuclear apparatus.Kim's nuclear stockpile is the sword by which he lives or dies; He does not want to end up like Muammar Qaddafi.

The most recent edition of this ongoing phenomenon is the August 5th United Nations Security Council Resolution (15-0 vote) condemning North Korea for it's recent belligerence and cutting a third of their export markets.  Nikki Haley described the sanctions as a "gut punch" and China advised North Korea to "be smart" and quit testing missiles (but don't stop developing them).  Any step in this regard is welcome, however just like the last thirty-six years, it will be ineffectual.  Sure, it may cause North Korea economic strain, however like Stalinist Russia they commit such a high % of national income to military spending so it won't stop them in their ultimate goal of creating one hundred nuclear-armed ICBM's that can reach the US mainland.   Just like UNSCR 1695 and UNSCR 1718 and the countless other samples dating back to the first Bush administration, these sanctions will be fruitless and distract us from making the real decision of whether to accept North Korea as a nuclear power or take decisive military action.  If China is on anyone's side, it's North Korea's. Their one overarching goal is to become the main hegemon in the Pacific theatre, of which the US currently controls. The US dictates navigation rights in the South China Sea, and has military bases in Okinawa, South Korea, Tokyo, Guam, Australia, Malaysia, Singapore, Hawaii and aircraft carriers/destroyers dotted all over the pacific. To China, this is an act of aggression. The more advanced North Korea's nuclear program becomes, the bigger bargaining chip it is for Peking. Perhaps the US will back down and withdraw it's forces from Japan and South Korea in return for a denuclearized peninsula. Or if North Korea does strike at US bases in, say, South Korea, Guam, Okinawa, San Diego and Washington (the only base our subs are operable), the US pacific command would be imperiled. China controls the Panama Canal and can restrict access to hostile or warring nations.

That's the real reason China won't act decisively, not due to refugees or lack of leverage. We must cease talking about sanctions, getting China to act, talks, diplomacy or any soft power as an effective option. It's simply not a strong enough prescription. As Nicholas Machiavelli noted in his masterpiece The Prince:

"Thus it happens in affairs of state, for when the evils that arise have been foreseen (which it is only given to a wise man to see), they can be quickly redressed, but when, through not having been foreseen, they have been permitted to grow in a way that every one can see them. there is no longer a remedy."

I'm going to bum you out and tell you the truth instead of writing yet another column calling for sanctions or talks, actions that history has proven to be fundamentally impotent. We have two options and neither is good: Either we accept North Korea as a nuclear power and deescalate tensions, or we obliterate their country in the blink of an eye. The first option entails rolling back our military commitments to Japan and South Korea, which seems even less likely as we recently deployed THAAD Missiles to Seoul against China's wishes, and open up talks with North Korea in order to persuade them to become a responsible member of the global community. However, it's unlikely will win any concessions from North Korea while the cost of ending one of our strongest and most strategically placed military alliances is quite high. Plus, if we did back out on the alliance, Japan and South Korea would want to develop nuclear weapons of their own. Proliferation would ensue, and there's high-concern that North Korea could share it's weapons technology and materials with Iran and the rogue groups which it funds. In fact, North Korea's Number two in command is currently in Iran on a 10 day visit, signaling wider ties between the two. The second option is to end this once and for all by taking immediate and decisive military action. This has been forecasted to cause tens of thousands of deaths in Seoul and Tokyo, however if done properly the first time there would be no capacity for a reprisal raid of any sort. In other words, if we decided to strike North Korea, it would have to be once and for all. As the old adage goes, “If you’re going to punch me, you had better make sure I don’t get up.” The largest concern, therefore, is a declaration of war from China and Russia, the second and third largest armies in the world, respectively. So neither option is advisable or comforting, however we must face the reality of the situation as opposed to conjuring up illusory actions. Machiavelli advised us

“that war is not to be avoided, but is only put off to the advantage of others”

If he's right, we are doing a hell of a job of putting confrontation off to North Korea’s advantage. Military action may be inevitable, and the longer we wait, the worse it will be when it does happen. Dannysmith1794@gmail.com
See my letters in The New York Times, Washington Post and The Wall Street Journal.