By SARAH NADAV
Advertisement
Wine Expert and Guest Blogger Avi Hein weighs in on Israeli wines and his picks for this year’s best for Rosh Hashana. 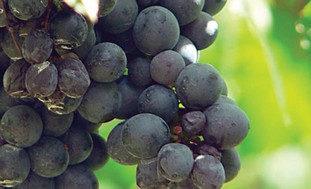 It’s not a Jewish holiday without wine. While the traditional Rosh Hashanah greeting is for a sweet new year, there’s no reason to settle for sweet wines (unless, of course, you’re pairing your wine with some sweet food like a honey cake or ice cream). The religious commandment is to enjoy and feast. In order to truly fulfill this commandment, one should not drink any grape beverage but rather sanctify themselves with world-class wine that brings enjoyment to the drinkers.Holiday RecommendationsSegal Dovev Argaman Red –Segal’s Dovev Argaman is a smashing success and Segal’s winemaker has shown that great wine can come from a

grape which was initially an unsuccessful experiment of the Israeli wine industry developed by Professor Roy Spiegel in the early 1990s;. It definitely rallied and the 2007 vintage won the equivalent of a Gold Medal at ‘Les Citadelles du Vins’ Competition held in Bordeaux, France. NIS 90Yatir Viognier --- Yatir, one of Israel’s finest wineries, partially owned by Carmel Winery, recently received three to four stars in Hugh Johnson’s 2012 Pocket Wine Book. The Viognier is a fresh, white wine, which has tinges of autumn fruits, including citrus. The best Israeli Viognier. Yatir’s parent winery, Carmel, also makes a great Viognier in the Carmel Appellation series, a close second to Yatir’s take. NIS 75Yatir Cabernet-Merlot-Shiraz – This blended red is full bodied and elegant. Royal purple, with deep tannins and hints of plums, berry, and cherry. Not meant to be drunk quickly but rather sipped and savored slowly, with a long finish. NIS 95Barkan Superior Cabernet Sauvignon – Varying in quality from year to year, Barkan’s Superior Cabernet Sauvignon is dark, royal purple, firm, andconcentrated, with a mineral finish. NIS 180Barkan Altitude +720 - Barkan’s Altitude is composed of grapes from a variety of altitudes in Israel, from Mitzpeh Ramon in the south to Dovev on the Lebanese border. NIS 109Tzora Neve Ilan –Tzora is a boutique winery in the Judean Hills, outside of Jerusalem. According to Mark Squires, who writes about wine for The Wine Advocate, “The Judean Hills is one of the most underrated wine regions in the world.” The Tzora Shoresh is also highly recommended. Both are complex and reflect the terroir-driven approach of the winemakers. NIS 134 read more here...Saslove Aviv –Saslove Winery was established in 1998 by Canadian immigrant Barry Saslove. Highly recommended include the Saslove Aviv “April,” which is a blend of 40% Cabernet Franc, Petit Verdot and Nebiolo, 40% Merlot and 20% Cabernet Sauvignon and the Saslove “Marriage,” which is a blend of Cabernet Sauvignon, Merlot, and Shiraz, as well as Cabernet Franc, Petit Verdot, and Nebbiolo. Saslove is kosher as of the 2010 vintage and also made a line of kosher wines under the ‘Sagol’ label. The Aviv wines retail for about 79 NIS. read more here...Recanati Sauvignon Blanc -- Recanati is one of Israel’s top value wines, with options at any level and budget. A short drive from Ra’anana and Kfar Saba, Recanati is straw in color with hints of citrus and grassy tinges, refreshing for a light meal or holiday lunch. NIS 50The Derekh HaYayin (Wine Route) chain also has a Red and White “Special Edition” which are well recommended for about 60NIS/bottle.

Teperberg Silver Sangiovese – the only mevushal wine on this list, Teperberg is one of Israel’s oldest wineries that began making worthy table wines in the past decade. The Sangiovese, a traditional Italian grape, is perfect with pastas, brisket, and foods with deep red sauces. NIS 45Teperberg Late Harvest Riesling – Not for Kiddush at the main meal, but rather to enjoy as an aperitif or dessert, this wine will go great with an apple and honey cake, especially if you manage to make it a la mode. Teperberg also makes a white and red moscato, for a more simple dessert wine, and the only mevushal sparkling wine in Israel. NIS 50 Best Value Wines:Young Value Wines: Don’t want to burst your budget or just need to make it to the nearest supermarket? At or under 40NIS: try Segal Fusion series, or the Carmel Private Collection or, for a sparkling wine, Carmel’s Selected Brut. Carmel has made an amazing turn around in the past few years and the Private Collection series provides some of the best quality-for-price. A Holiday Bonus:Rimon Winery – not a traditional grape wine, but rather a pomegranate fruit wine. As a pomegranate is one of the major symbols of Rosh Hashanah, Rimon (which means pomegranate in Hebrew) Winery makes several dessert wines and a unique sparkling wine as well. It’s a fitting addition to any Rosh Hashanah table. NIS 66 – NIS 75Where to buy in Israeli winesIn IsraelIn Jerusalem, you can purchase it at several wine shops on Rehov Agrippas, near Mahane Yehuda. In Tel Aviv, you can purchase these wines at Derekh HaYayin (Wine Route, with branches also in Modi’in, Ra’anana, Nes Ziona, Ramat HaSharon). For a personal touch, you can also buy directly from David Rhodes [email protected] , a wine broker and educator living in Ra’anana or from Adam Neustadter [email protected] a wine broker near Modi’in.In the United StatesYou can buy Tzora from Israeli Wine Direct and many other wines from your local wine shop.If you can’t find it in your local wine shop, let them know who the importer is (usually listed on the winery’s web site) and request that they carry it.Want to know more?Daniel Rogov, Israel’s top wine critic, passed away a few weeks ago. The Israeli and kosher wine world will sorely miss him. However, the Rogov''s Guides to Israeli & World Kosher Wines 2011 is still available for sale on Amazon.com, Steimatzky, and elsewhere. The 2012, the last edition, should be going on sale shortly.Guest blogger Avi Hein is a high-tech marketer and has written HaKerem: The Israeli Wine Blog (http://www.israeli-wine.org) since 2007. He can be reached at [email protected]As always you can find me- Sarah Nadav on twitter @sarahnadavphotos of wine by Sarah Nadav grape photo:courtesy
Advertisement
Subscribe for our daily newsletter