Lest Ye Be Judged

By JORDANA BROWN
Advertisement
Wow! I haven't blogged in almost a month. I can attribute that to the pretty basic, non-exciting yet still lovely month I've had. The weather was gross, now it's incredibly gorgeous. You wake up on February 17th and the sun is shining and you throw on a light jacket and as if by Divine intervention Matisyahu is singing "Sunshine" on your iTunes and you head to work. You put in your hours, maybe get a drink after work, wait for a super short and hectic vacation Friday and eat, socialize and pass out for the 25 hours of Shabbat. And it's been that way for the last month, give or take. Oh! And my sister got engaged, so that's pretty fantastic. Have to find something to wear and a part of me wants it to go smoothly and another part of me wants it to be an insane disaster so I can blog about it. More to come. Today's post is something I've been turning over in my mind for months and I don't know how to even approach it, so if it sounds disjointed, my bad!

This blog was started to document my transition from America to Israel through the process of Aliyah. I think we all know the basics by now.

Who? Me. What? Moving to Israel When? July 1, 2014, Where? Jerusalem (for now) Why? Zionism. And I think if you know me or have followed my journey at all, you know that I'm not some spring chicken hoping to start my adult adventure in a new and exciting place. I lived a nice chunk of young adulthood in NYC and came to this decision relatively "late in life" so to speak. Most of the people in my peer group here in Jerusalem, in my ulpan, on the NBN website, etc, who came here single did so younger than me. It took me a while to decide, to save money, to create a plan and to get up the nerve to make this change. A change I have always contended is for the rest of my life. I was never making this change to "try out" aliyah or to "give it a chance." I envisioned my great- grandchildren living here (how's that for forward thinking even before being married?)

But I've come to find that this isn't the case for everyone, and that even my own certainty can be taken to task by skeptical strangers on the Internet. Some examples. There is a Facebook group for olim- I assume it's meant to be an online support and information community for those of us who've committed to the difficult task of starting life over in Israel. As anyone who is a part of this group knows, it has often devolved into a "I hate Israel" complaint society. Truly, some days there are 5 "life here isn't worth it"s and "I'm leaving" posts- easy. And then there is a rush to calm the poster down and soothe them and convince them to stay (I'm guessing- I don't do much follow-up.) Usually I don't engage, but one time I jumped in to defend my friend who gave this complainer some tough love and suddenly, I was being roasted! When I mentioned that Zionism brought me here, some random guy (who I think actually lives in England) asked me if I was so Zionist, had I renounced my American citizenship, and what kind of a Zionist could I be if I hadn't served in the IDF. I thought the questions were kind of insane, and a poor barometer of my Zionism. If I love Israel, I have to hate America? Could there never be a family emergency that brought me back to the States? And if I decided to move here as an Orthodox woman past the age of 25, should I beg the army to let me serve? The whole argument was ludicrous, but here I was- having my aliyah judged!

A few weeks later, I again found myself embroiled in an online argument with a stranger (I am working on this, you should know- I'm aware it's not a good look.) Again I was defending a friend from a Facebook bully and he growled back. He told me (he doesn't know me, but we have some mutual friends) that he and his friends often talk about me and take bets on when I will make yerida (leave Israel for good). Wait, what? A guy who disagrees with me politically, wishing me failure on my life in Israel? Does my loud and proud Right-Wing Zionism threaten him so much personally that he secretly hopes it fails? That's crazy! And then I realized- this is a thing. And although he's pretty nasty, he's not the only one who does it.

Judging people's Zionism, their dedication to this country, their support for Israel, their likelihood to remain here for good- this isn't something that only Facebook bullies do- we all do it! Even me! Especially me? I have had conversations where I cluck at people who are thinking about leaving and going back to their countries of birth. I shake my head at people who call those places "home." "We are home!" I exclaim with pride, not pausing to wonder whether it comes off as hurtful. I might judge someone who goes back to their birth country 2 and 3 times a year and think "commit yourself to your move!" I wonder incredulously at olim who contemplate raising their family anywhere besides Israel, knowing that the main focus of my move was to raise a family here. It's been a time of real self-reflection, and I often haven't enjoyed what I've seen. I hate criticism in general and self-criticism is worse, because I can be brutally honest. But without this introspection, I wouldn't be able to grow, and L-rd knows I need to. I need to help that person want to stay here. I don't need to coddle them and jump on their "Israel is the worst" bandwagon. But I can listen to their concerns, come up with meaningful possible solutions and try and share my Zionist love affair with them. I can try and be an advocate for the good, without ignoring their valid complaints of the bad. And I can realize that just because the annoying things here don't bother me as much, that the positive so outweighs the negative in my aliyah process and that I intend for my aliyah to be permanent doesn't mean that everyne feels the same way. Or has to. Or ever will. And just like I have to learn to accept people who are different from me in a myriad ways, so too I have to accept, love and not judge my fellow olim who are dealing with their life change in a different way. I hope I can do it and I think I can do it- I'll keep you posted! 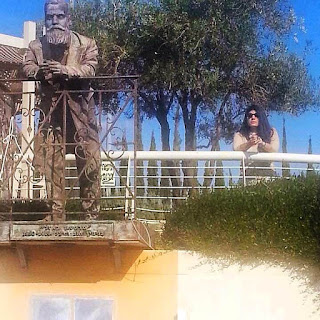