As big Dvir fans (the cartoon), and fellow Gush Etzion residents, I was deeply saddened to hear about the death of Rabbi Uri Dasberg z"l in a tragic car accident last week. When my neighbor Alan Rosen showed me the article that the tragedy moved him to compose I was only too happy to give him space in my blog to publish it. Drive safely everyone.  ~Laura 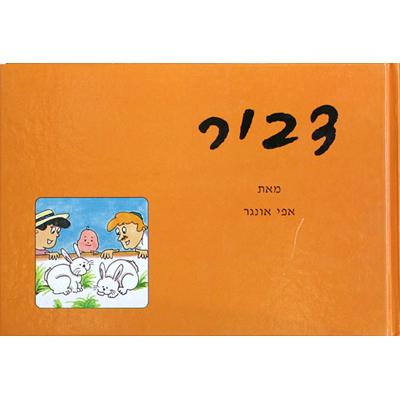 250A decade ago when I took my young children to the Jerusalem book fair, they were particularly interested in a book of cartoons about a mischievous toddler named for the author''s first-born, Dvir.  Looking more carefully at the book, I was surprised to learn that the talented cartoonist, Effie Unger and her husband Yaron, had been killed in their car, shot by Hamas terrorists in 1996. Two year-old Dvir and his seven month-old brother Yishi in the back seat, escaped unharmed. I knew the story but I had not connected it to this talented cartoonist. It seemed just too common here in Israel, even a book of cartoons had a tragic story tied in.
Though their own children were grown, Rabbi Uri and Yehudit Dasberg, Effie''s parents, had adopted the two infant boys without a second thought. I seem to remember that Yehudit, during that dark week of mourning back in 1996, announced that these boys would grow up, loved and nurtured. Yehudit understood that tragedy could be overcome. It was not easy but she would do everything possible to turn things around and give the boys a wonderful life. I always thought about Yehudit''s words and her courage dealing with adversity. I wondered how the boys were doing.
Now more than a decade later I saw Dvir as he rose to eulogize his father; strong, confident and mature.  "So that''s Dvir," I thought. In my mind he was still the toddler in the book. His ripped shirt, the traditional sign of mourning, spoke dramatically of the second tragedy this young man had just experienced, far too much for a young man of 17. It was encouraging to hear Dvir share with the audience his very deep appreciation for everything his Abba had done for him. Yishi shared more about the love he had received and the greatness of his father, but he could barely control his emotions. It was clearly apparent from their words that Yeduhit and Uri had triumphed and raised two wonderful boys.
As a parent of four teenagers, stretched by the ongoing demands of parenting, imagine suddenly raising 2 babies as the Dasberg''s had done – "going back 20 years" as Dvir had said in his hesped.  Not a passing assignment, but years of dedicated efforts, requiring patience and wisdom. In their eulogies Dvir and Yishi gave us a window into those years, speaking of the love they had received and the humor that had filled their lives.
Last Wednesday the country shared the terrible feelings of pain and loss experienced by Dvir and Yishi.  I was glad that I had come to hear their parting words to their father.  I know that they have also received some special gifts in life. Yehudit, again faced with loss, spoke of the need to move on despite this second tragic loss. She had handled tragedy and she could handle the responsibilities that lay ahead.
May G-d grant Yehudit good health and long years to guide her beloved boys Dvir and Yishi and her many other children and grandchildren.  Yehudit and Uri overcame adversity and taught us what is possible. Their words and actions inspire us all.
Advertisement
Subscribe for our daily newsletter