The End of Days: An Archaeological Tour of Tel Megiddo

Having Prof. Finkelstein as a guide gave us an insider’s, detailed look at not only the site but also at the finds and stories beneath it. 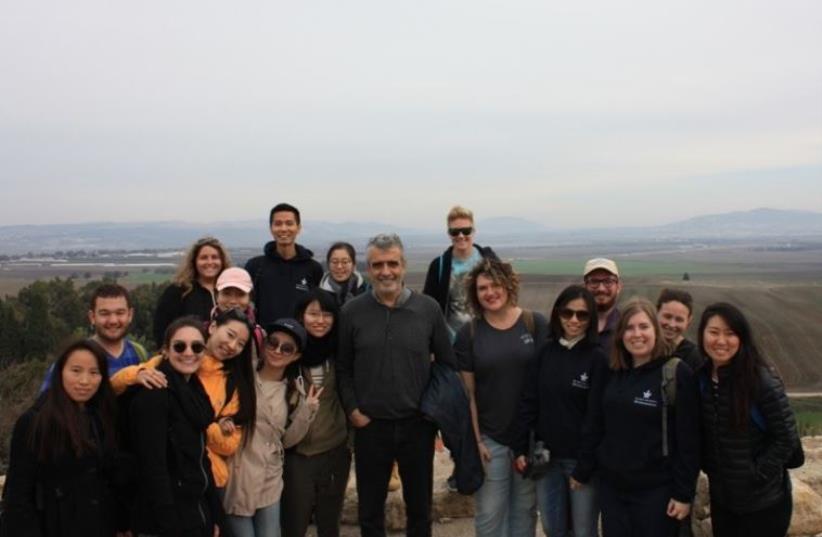 Prof. Israel Finkelstein and the International MA class of 2017
(photo credit: TEL AVIV UNIVERSITY INTERNATIONAL PROGRAM IN ANCIENT ISRAEL STUDIES: ARCHAEOLOGY AND HISTORY OF THE)
Advertisement
Recently we had a field trip to Megiddo, the site of the last battle between the forces of heaven and the forces of evil.While going on a tour of literal Armageddon is pretty cool in and of itself, this tour was especially interesting because we went with the individual in charge of the excavations there, Prof. Israel Finkelstein. Having him as a guide gave us an insider’s, detailed look at not only the site but also at the finds and stories beneath it.The geographical path already takenPart of the importance of Tel Megiddo is its geographic location, as it guards the pass between the coastal plain, also known as the ancient Via Maris, and the Jezreel Valley, the route inland to Damascus and Mesopotamia. Pharaoh Thutmoses III once used the pass to launch a surprise attack on the defending army at Megiddo, and wrote extensively about his feats in inscriptions in Egypt. This path through the Carmel Ridge, known in ancient times to the Egyptians as the Aruna Pass, is today the highway route. As we drove through the steep hills, I imagined what it would have looked like when an Egyptian army marched down the exact same road 3,000 years ago.4,000 years of stratigraphy; 100 years of excavationsOur tour of the ancient Tel began at the gate, where Prof. Finkelstein explained how to use the stratigraphy and orientation of the seven different gates that have been archaeologically identified. One of these gates has been partially reconstructed to give the public an idea of what the ancient site may have looked like as one walked through the entrance.We followed Prof. Finkelstein through the gate and into the entrance courtyard, where he explained the 4,000 years of stratigraphy visible in the excavation cuts around us and the one-hundred year history of excavations at the site. The first excavator, Gottlieb Schumacher, was a pioneer in archaeology in the Levant in the very early 20th century. The University of Chicago then also conducted extensive excavations at Megiddo during the 1920s and 1930s, at which point they cut out large chunks of the mound. In the 1960s, Israeli archaeologist Yigael Yadin conducted some small excavations as well. And currently, Prof. Finkelstein serves his 20th year as coordinator for the site. All of these excavations make Tel Megiddo one of the best understood and most important archaeological sites in Israel.

Back to the Bronze Age From the gate entrance, Prof. Finkelstein guided us to the eastern temple complex, where recent excavations have unearthed the foundations and floor of a massive Bronze-Age temple. Here, he discussed the difficult topography and geology of the mound, explaining that the elevation of the mound didn’t always signify a structure’s age. Also important to this site was that an artificial platform had to be built to support the temple complex since the original hill was not large enough to support the builder’s ambitions. Altogether, these details point to an incredibly complex and sophisticated city and administration that rivaled any other location in the ancient world at the time.Prof. Finkelstein continued our tour, showing us the palace and stables, the large trench cut through the side of the Tel, the Iron Age city wall (and U of Chicago trolley construction), the Royal Tombs, and the metalworking area.

The insider’s guideSince he previously taught us the history and details of the site during the seminar he taught, Prof. Finkelstein didn’t explain much of the general information about the site to us while we were on the tour. Instead, he focused mostly on showing us the locations that he discussed in class, while giving interesting footnotes and anecdotes relate to the sites. He also highlighted the difficulties of conservation and restoration, the importance of stratigraphy, and the myths that surround the excavations. A funny story, for example, regarded the many palm trees that dot the surface of Tel Megiddo. It is said that during the excavations done by the University of Chicago, one of the foremen, who was from Egypt, would take snack breaks. He would sit down and eat a handful of dates, and would then toss the pits over his shoulder. These pits, it is said, were how the palms were planted.We finished the tour by walking through the water tunnel, which is dated to at least the Iron Age but possibly older. The descent is steep, and the end leads outside the Tel and onto the road. The entire day was a wonderful experience that really supported our classes at Tel Aviv University. To see the buildings and locations that we have been learning about in class is such an advantage, and to be at the site with the expert and master, Prof. Israel Finkelstein, is the best opportunity anyone can hope for.