Israel's First Ever Boyband Hi Five Reunites after 20 Years; Lead Singer Amir Fryszer Guttman: "Being in the closet during the band's years was the biggest mistake of my life."

HiFive
Hi Five, 1996 (promotional photo) The first ever Israeli boyband that introduced us to Amir Fryszer Guttman is reuniting after 20 years for a one-night-only show in Tel Aviv. Fryszer Guttman, who came out publicly as gay only after the band’s heydays, admits that being in the closet during the Hi Five years was ‘the biggest mistake of my life.”
“The story with the closet [during the Hi Five years] is much more complicated than it seems,” admits Amir Frisher Guttman. “Before the band I was out of the closet. The family, the close friends and even the band members knew.”
“Twenty years ago Israel wasn't as liberal as people tend to think. As a 20 year-old kid I was very afraid to expose my sexuality back then, so I went back into the closet, and I mark this as the one biggest mistake of my life. In Israel back then, the only gay icon was Dana International, and I wish I had had the courage that she had back in the day.”
20 years later, Amir Fryszer-Guttman’s husband Yanay and (maybe) their son will cheer from the audience as he joins bandmembers Idan Yaskin, Eyal Shahar Eyal Dessau -Zephyr and Michael Harpaz for a one-night-only performance of Hi Five on April 9. The concert will include the band's biggest hits.
“There's something really special, strange and unifying that floods the room when we're together,” says Amir. “The last time it happened was at my wedding to Yanay six and a half years ago. We remained in constant touch even after the break up of the band, sometimes more, sometimes less. But there will always be that thing that will connect us. This is for life.”
Since 1996 Hi Five has released three studio albums and one mini-album. All went gold with tens of thousands of copies sold. The band took home an award for Best Israeli Group for three consecutive years. In February 1998, fans were shocked and astonished when band member Michael Harpaz announced that he was leaving the band following a longing for his family who then lived in the United States.
In 1999, after many rumors, the band announced in a press conference that they had decided to part ways after feeling exhausted and a desire of each member to go in a different direction in life. The farewell concert was held in the Nokia Arena in front of a huge crowd of excited and emotional fans, joined by Michael Harpaz, who came especially from the United States to give the band a moving "final note."
Though they kept in touch, the first meeting after the decision to unite for a one-time show was special. “Our first meeting was a day before the press conference where we announced the reunion, in preparation for the conference,” says Fryszer Guttman. “Idan arrived from New York and we waited for him in the hotel. This group is known for its unique dynamic, and to tell the truth, only few will understand.” 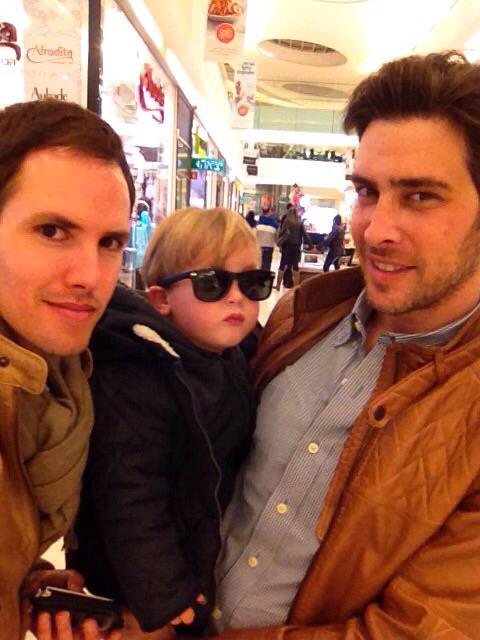 Amir Fryszer Guttman (right) with husband Yanay and son Roy (photo: Facebook)
On September 9, 2009 Fryszer Guttman married his then-boyfriend Yanai in a ceremony which was officiated over by actress (and gay icon) Gila Almagor. The event was the first same-sex marriage of a public figure ever done in Israel. “Yanay of course knew about Hi Five like every other young person n the country," Amir says. “We start rehearsals in two weeks and I'm sure he'll come to visit if I let him.”
Though it could be very interesting to see his dad on stage, Amir doesn’t have any plans for his 3-year-old son to watch the big show on April 9. “Roy might not be awake this late at night,” he says, “but he already knows how to sing ‘Yom Me'unan.’”Hi Five at Menora-Mivtahim Stadium, Saturday April 9 at 8:30. Tickets
Advertisement
Subscribe for our daily newsletter