Advertisement
You might have recently read that Trump lost it with Abbas. He supposedly actually yelled at him, accused him of lying to him. Back in March Abbas convinced Trump that the Palestinians are really interested in making peace with Israel. Those were the magic words that Trump needed to hear. I'm sure that he didn't question Abbas too much about it. He swallowed the bait. 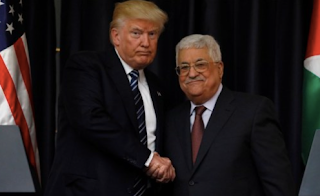 But after Bibi told Trump and the public (for the millionth time) that Abbas promotes violence with Israelis by supporting terrorists, naming schools and community centres after suicide bombers, paying imprisoned terrorist's families billions of dollars and brainwashing children at school to hate and kill Jews, Trump lost it on Abbas in his recent meeting with him.

I hope this is the breakthrough we've been waiting for. Making a fool out of Trump is the worst thing one can do. Abbas just did it. He's gotten away with it since he became the PA leader but previous US leaders were not Trump. As we all know he shoots from the hip. Unlike those before him, his behaviour is not scripted.  But like his predecessors he doesn't really understand the true muslim mindset.  He never understood the real existential threat that Israel faces from her neighbours. He thought he could be a hero by making the most challenging 'peace deal' in history. Now some of the truth smacks him in the face. Quelle surprise! Abbas is not interested in peace! Neither are the people who elected him.

I sincerely hope that he ignores his left wing advisors like Kushner (all former Democrats) who continue to hound him to push Israel to make endless concessions with the Palestinians.

I hope he follows his own gut  now that he was insulted publicly by Abbas and comes to the only logical conclusion: The Palestinians as a whole are not people to make peace negotiations with. All their leaders are the worst kind of terrorists and Holocaust deniers. Instead of pleading with them to 'make peace' with Israelis they should  be tried as war criminals.