In September, a number of defendants were acquitted in the Jerusalem Magistrate's Court for their role in the wedding. 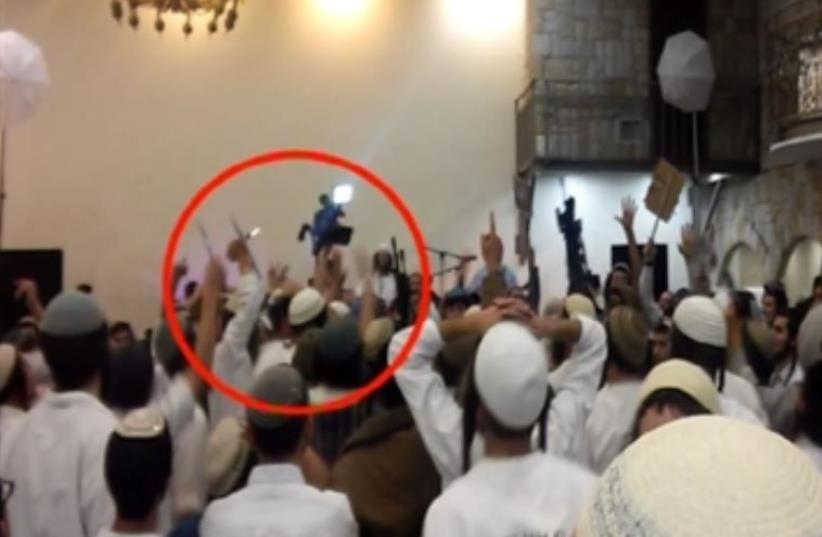 The Jerusalem Magistrate’s Court on Wednesday convicted seven men, including the groom, who participated in the “Hate Wedding” seven years ago of incitement to violence and terrorism. The singer Sinai Tor was acquitted.

In October 2016, 13 defendants, including five minors ages 14-17, were indicted on charges of incitement to violence and terrorism for participating in a wedding celebration on December 7, 2015, in which revelers were caught on video dancing with guns and attacking pictures of the three Palestinian Dawabshe family victims of the infamous July 2015 Duma arson terrorist attack.

The indictments, in what became known as the “Hate Wedding” Affair, were filed after approval by Attorney-General Avichai Mandelblit and included the groom, Yakir Eshbal, from Yad Binyamin.

The minute-long footage of the wedding, broadcast by Channel 10 in 2015, horrified the public and Israeli politicians across the spectrum. It showed young men wearing white kippot and shirts, dancing while holding knives and guns and carrying out displays of violence.

View of the Magistrate's Court in Jerusalem on August 15, 2018. (credit: YONATAN SINDEL/FLASH90)

Some of the dancers danced with their faces covered with ski masks, and some of them repeatedly stabbed, burned and tore the pictures of the Dawabshes with knives, fire and their bare hands.

One of the trial highlights was in May 2021, when former defense minister Moshe Ya’alon testified.

Ya’alon was questioned by the defense about how and why he released the videos of the wedding to the media. They tried to portray his actions in releasing the video as legally problematic or as showing he was using it for political purposes, and that he did not view the wedding as a criminal issue.

Rather, the defense presented Ya’alon as wanting to use the video to convince Yesha Council (the umbrella organization representing communities in Judea and Samaria) leaders and others criticizing the state crackdown on suspects in the Duma arson that the threat level from extremist Jews was real.

However, such a public-relations exercise would not make the wedding criminal.

In contrast, The Jerusalem Post learned that the prosecution’s view was that Ya’alon’s testimony was entirely irrelevant and itself a public-relations display.

In its view, the video of the wedding spoke for itself, showing an unprecedented level of incitement that had never occurred at any other wedding.

Several defendants along with dozens of other attendees, including minors, started dancing while waving pictures of the Dawabshe family and displaying two M-4 rifles, one M-16 rifle, pistols or pistol replicas, Molotov cocktail replicas and knives.

The prosecution argued that the combination of actual weapons being used against pictures of Palestinian terrorist victims was unique and sets the case apart from many other Jewish or Arab weddings that might incite but do not lead to indictments.

In November 2018, Judge Eitan Cohen ruled in favor of the defense in forcing the prosecution to provide 17 case files to the defendants in which the state did not press charges against Arabs for actions that the defendants said were identical to their actions.

Cohen hinted that if a tougher line was taken against Jews, there could be grounds for dismissing the charges even if the defendants were guilty. On the flip side, he ruled in favor of the prosecution on a separate issue.

It has said that it still retains many original videos, and that it has a full copy with chain of custody proven regarding the one missing original.

A NUMBER of politicians from across the political spectrum criticized the video in 2015, including then prime minister Benjamin Netanyahu.

“Israel is a land of the rule of law,” he said. “We will not tolerate a situation where a particular group refuses to accept the laws of the state and carries out acts of murder.”

However, despite the general condemnation, a criminal indictment for incitement was never a foregone conclusion.

In fact, Honenu, which defends right-wing activists in court, issued a statement in 2016 condemning the indictment as proof of a double standard in which right-wing Jewish Israelis were treated more harshly than Arab-Israeli offenders.

The statement said Arab-Israelis frequently fire into the air and display guns at weddings and other communal gatherings, and they frequently engage in incitement without consequence.

Asked in 2016 how it could compare Arab-Israelis shooting into the air with no specific anti-Jewish intent to the actions of the Jewish defendants, Honenu did not respond.

Jerusalem District Attorney Yifat Pinhasi, who filed the case along with prosecutor Erez Pedan, released an unusual public statement in 2016 regarding the indictment, saying the event “was a grave incident of incitement to violence and terrorism.”

“The actions absolutely crossed the line from being legitimate free expression into the area of criminal incitement offenses,” she added.

Pressed on how the defendants’ actions, however condemned, could constitute incitement when they occurred at a private event, a Justice Ministry spokeswoman responded in 2016 that the approximately 500 attendees removed the event from being considered private since the incitement impacted a large number of viewers.

The indictment said Eshbal, the groom, was in control of the incitement that occurred in the presence of an audience of about 500 attendees.

A STATEMENT by the Justice Ministry in 2016 said shortly before the wedding, investigators had arrested several suspects in the 2015 Duma terrorist attack, possibly making the display against the Dawabshe family victims a partial response to the arrests.

The indictment said shortly before the wedding, some of the defendants printed pictures of Saad, Riham and Ali Dawabshe along with the message: “Revenge.”

Pictures were attached to cartons and boards so they could be waved as banners at the wedding.

During the song, another defendant, Daniel Moshe Piner of Kfar Tapuah, joined the dancing with a shirt bearing the written message, “No Arabs, no attacks,” while waving a yellow shirt on which was written the symbol of the outlawed Kach movement.

Next, Tor started singing songs about vengeance on God’s enemies, changing biblical references to the Philistines to Palestine.

Lahav Harkov and Jerusalem Post Staff contributed to this report.