Baadani was admitted to hospital at the end of November, and his condition deteriorated on Tuesday night.

Baadani was admitted to the hospital at the end of November, and his condition deteriorated overnight.

Baadani was born in Hadera in 1928 to Yemenite parents who moved to what was then Palestine after World War I.

When Shas was established in 1984, he was chosen to be on the spiritual leaders' council. During his time in the position, he greatly supported Shas's coalition cooperation with the Likud and backed Arye Deri in his bid for chairman against Rabbi Yitzhak Peretz. 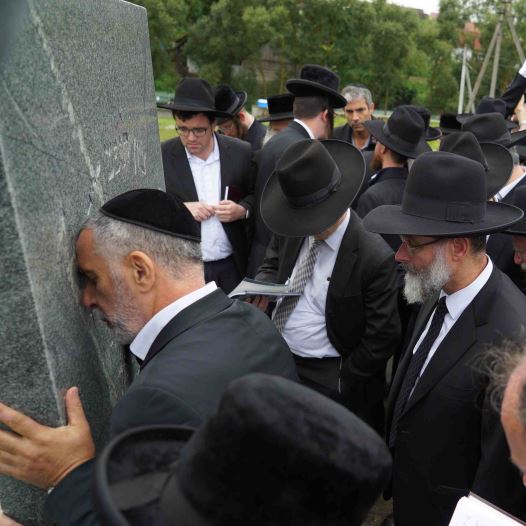 Dozens of rabbis, yeshiva deans, and leaders from the haredi community, including Rabbi Shimon Baadani, a member of the Shas Council of Torah Sages, travelled to Radun and prayed first at the building which formerly housed the yeshiva of the Hafetz Haim, and then by his gravesite itself. (credit: DIRSHU)

"It was with a heavy heart that I received the bitter news of the passing of Rabbi Shimon Baadani zt"l - a great scholar and spiritual leader of the Rabbis of the House of Israel.

"Rabbi Baadani, who served as president of the Torah Sages Council of the Sephardic community in Israel and around the world, was characterized throughout his life by his perseverance. From a young age, he studied his Talmud, gave lessons, led yeshiva and strove to return the crown of Sephardic Judaism to its glory. His contribution to the flourishing of the Torah world in our generation is evident and important.

"Rabbi Baadani was not looking for fame. He spread the Torah widely, with great diligence and extreme humility. From his warm home in Bnei Brak, he went every day to the Torah and Life Yeshiva, whose rabbis and students he devoutly nurtured.

"The love of Israel that [was within] Rabbi Adani will continue to serve within us.

"I send my deepest condolences to his family and all his loved ones. May his memory be a blessing."

Politicians mourn the passing of a 'noble character'

"The world has darkened for us," said Deri. "I am broken and hurting over the passing of the elder of the Torah Sages council, my teacher and Rabbi Shimon Baadani."

"Together with the rest of the people of Israel, I am hurting over the passing of the elder of the Council of Torah Sages Rabbi Shimon Baadani z"l," said Jerusalem's Mayor Moshe Lion. "I had the privilege of his blessings and counsel over the last years, and his noble character was an important link in the chain of the defense of the Jewish people."

"Rabbi Shimon Baadani's passing is a great loss for the Torah world," said President Isaac Herzog. "His unique spiritual leadership was connected to deeply rooted Israeli tradition and to his audiences, the people and the nation."

"The Jewish world is mourning and broken," said Housing Minister Yitzhak Golfknopf. "As an elder in the Torah Sages Council, the passing of Rabbi Baadani is a great loss. He stood like a fortress wall against those who tried to violate the purity of Shabbat."

"He stood like a fortress wall against those who tried to violate the purity of Shabbat."

"The rabbi was a symbol and example of unique self-sacrifice for the establishment of Torah institutions, this is a major loss and a great sadness," said Israel Police Chief Kobi Shabtai. "I visited him at home and in the hospital and I got great wisdom from his counsel."

"I was very sorry to hear about the passing of the elder of the Torah Sages Rabbi Shimon Baadani," wrote MK Gideon Sa'ar on Twitter. "Rabbi Baadani dedicated his life to Torah, learning it and passing it on. I had the privilege of knowing him  and having meetings with him over the years in which I saw a great love of Israel."

"Together with all Jewish people in Israel and in the Diaspora, we are pained by the departure of the elder of the Torah Sages concil, the head of [the Torah and Life Yeshiva], the great scholar Rabbi Shimon Baadani zt"l.

"The people of Israel lost a great man, whose teachings, prayers and blessings stood [at the right hand] of all of Israel for decades.

"Woe to the ship that lost its captain and all the house of Israel will mourn the fire that God has kindled."

The funeral was set to take place at 1 p.m. on Wednesday afternoon.