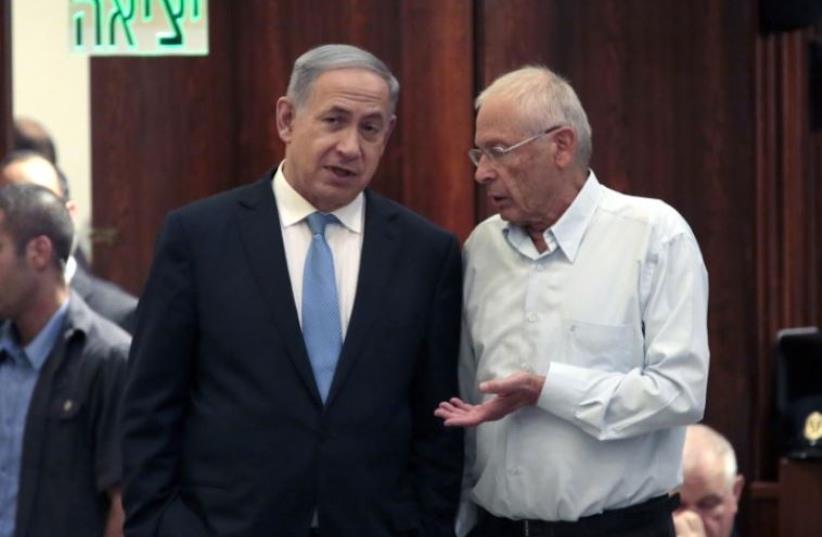 Prime Minister Benjamin Netanyahu (L) and Bennie Begin confer in the Knesset
(photo credit: AFP PHOTO)
Advertisement
Former Likud minister Benny Begin, son of former Likud prime minister Menachem Begin, revealed to Army Radio anchor Efi Triger on Monday that he will not vote for Likud in the September 17 election."It seems the leadership of the party is doing everything to ensure I will not vote for them," Begin said.Begin said the Likud's current leaders have made it impossible for him to vote for the party. Blue and White leader Benny Gantz called Begin's announcement sad and said he hopes to earn his vote.
Likud MK David Bitan responded that Begin votes for Likud when he is in favor of the list for the Knesset and does not vote for Likud when he is not.“It’s a shame – but I’m not surprised either,” commented Likud MK Miki Zohar. “In recent years, with all the respect and appreciation that I have for Benny Begin, his positions have become very distant from Likud’s positions.”Labor MK Itzik Shmuli also commented on the matter, highlighting that Begin expressed a feeling shared by many Likud supporters, and inviting them to support the Labor Party.“Benny Begin, a libertarian to the core, said out loud what many Likudniks feel in their guts – [Likud] is not the same political house anymore,” he stated.Shmuli added that the party has become an enslaved cult of personality, tainted with corruption and pushing Israel into the abyss by crushing democracy and the rule of law, [and] labeling citizens as traitors for their identity or position,” he added.“They have a place with us; it is not them who are leaving the Likud, but the Likud who has come off the rails and has left them,” he concluded.