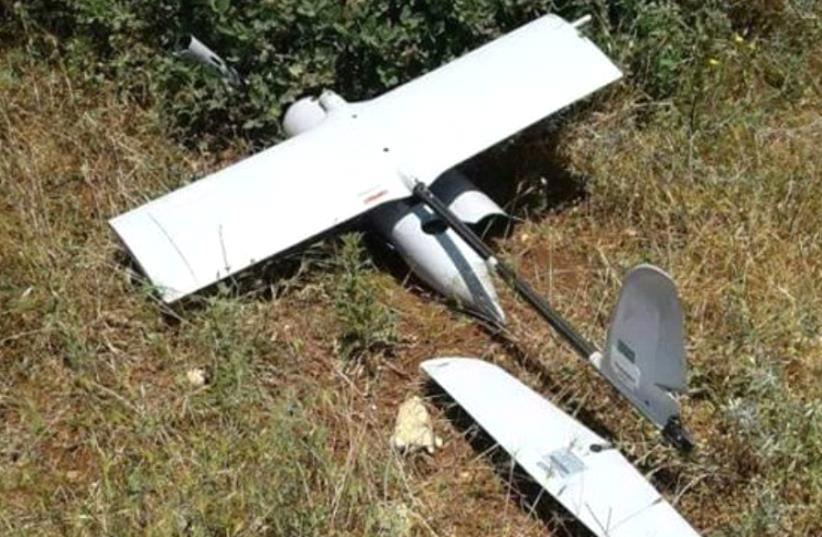 Israeli "Skylark" drone crash site inIsraeli "Skylark" drone crash site in Lebanon, May 2017.
(photo credit: ARAB MEDIA)
Advertisement
The Israeli military said a drone targeted by an anti-aircraft missile fired by Hezbollah over southern Lebanon Thursday afternoon was not damaged, after reports in Lebanese media that it was shot down.“A short while ago, anti-aircraft fire was detected from Lebanese territory at an IDF unmanned aerial vehicle. The aircraft was not damaged,” the army said in a statement.Footage from the village of Nabatiya that was shared on social media showed what seems to be the missile being fired followed by an explosion.While Hezbollah said it targeted the drone, they did not succeed in shooting it down.“Islamic resistance fighters Thursday repelled with the suitable weapons an Israeli drone flying over southern Lebanon, obliging it to leave the Lebanese airspace,” Hezbollah said in a statement.Last week, the IDF lost a small quadcopter drone after it fell inside southern Lebanon near the border fence. The IDF Spokesperson’s Unit said the aerial device was conducting “routine operations to secure the border” when it fell, and that there is no concern that any intelligence gathered could be leaked.Israel’s military did not state why the quadcopter crashed.While Lebanon’s MTV news station claimed the quadcopter had been shot down by Hezbollah, the group’s Al-Manar news said the quadcopter had been shot down by a civilian with a hunting rifle near the village of Kila next to the border across from the Israeli town of Metulla.A similar Mavic drone crashed in southern Lebanon last month, with Hezbollah claiming to have shot it down.The group vowed to start shooting down Israeli drones after an alleged drone attack by Israel on the group in its stronghold in Beirut in August.According to a report by The Times of London, the two drones that crashed in the Lebanese capital targeted Hezbollah’s precision- missile project, including crates with machinery to mix high-grade propellant for precision-guided missiles.Intelligence sources quoted in the report said the Iranian-made mixer – which was regarded as one of the key parts of precision-missile technology – was seriously damaged and that the computerized control mechanism which was in a separate crate was totally destroyed in the blast.Hezbollah claimed that the two drones were both armed with 5.5 kilograms of C-4 explosive.The IDF has remained mum on the subject, saying it does not comment on foreign reports.