The ayatollah said in a tweet that "the villainous US govt repeatedly says that they are standing by the Iranian ppl. They lie." 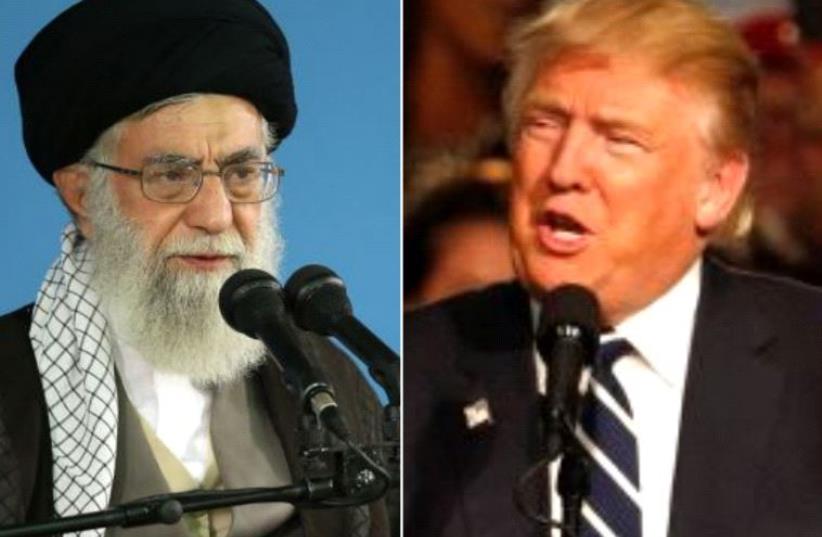 Iran’s supreme leader Ali Khamenei and Donald Trump
(photo credit: AFP PHOTO,REUTERS)
Advertisement
The tense diplomatic debate between the US and Iran is now playing out – on Twitter.Supreme leader of Iran, Ayatollah Ali Khamenei, posted a screengrab on Friday evening of a tweet by US President Donald Trump which was posted a week earlier, in which the president voiced support for Iranian protesters.
The Ayatollah said in his tweet that, "the villainous US govt repeatedly says that they are standing by the Iranian ppl. They lie."
He continued, claiming that if the US is "standing by the Iranian ppl, it is only to stab them in the heart with your venomous daggers. Of course, you have so far failed to do so, & you will certainly continue to fail."Trump responded on Twitter 11 hours later, tweeting his support for the protesters in Iran in both English and Farsi, perhaps in response to the English tweet used by the ayatollah. In the tweet, he says that: "The noble people of Iran – who love America – deserve a government that's more interested in helping them achieve their dreams than killing them for demanding respect." He finished his tweet by revising his 2016 slogan, saying that "Instead of leading Iran toward ruin, its leaders should abandon terror and Make Iran Great Again!"In a previous tweet, Trump said that Khamenei should be very careful about what he says after the Iranian leader harshly criticized the United States in a Friday prayer sermon in Tehran.
"The so-called 'Supreme Leader' of Iran, who has not been so Supreme lately, had some nasty things to say about the United States and Europe," Trump said in a tweet.
"Their economy is crashing, and their people are suffering. He should be very careful with his words!"
Khomeini's previous tweets on Friday evening also targeted the anti-Soleimani protesters and the words of support they received from Trump on Twitter.
Regarding the protesters he asked, "are the few hundred people who disrespected posters of Iran's honorable Martyr General Soleimani the people of Iran? Or, are the millions who attended his funeral the Iranian people?"
The 'Supreme leader' then turned his online ire directly to the US government, saying "These American clowns lie in utter viciousness that they stand with the Iranian people. See who the people of #Iran are."An Iranian protester, risking his life by speaking to France's i24 News, challenged Khamenei's analysis, saying that, "the Islamic Republic, by its broadcast authority and its media outlets, made this man [Soleimani] a hero. Some people, who are endowed with less intelligence than average, and some who are connected to the government and work in government bodies, were lured and forced to attend Soleimani's funeral in Ahvaz, Mashhad, Tehran, Qom and Kerman. All the people you see in those videos are less than 5% of the people of Iran. "I dare say [that the other] 95% of the Iranian people expressed joy and happiness at the killing of Qasem Soleimani," he said."The truth is that among the people, the Islamic Republic regime has no legitimacy or reason for being anymore," the protester said, adding that, "what the Iranian people want with all their being, is that the regime will fall."