"From our point of view this is another proof of the effectiveness and impact of this project." 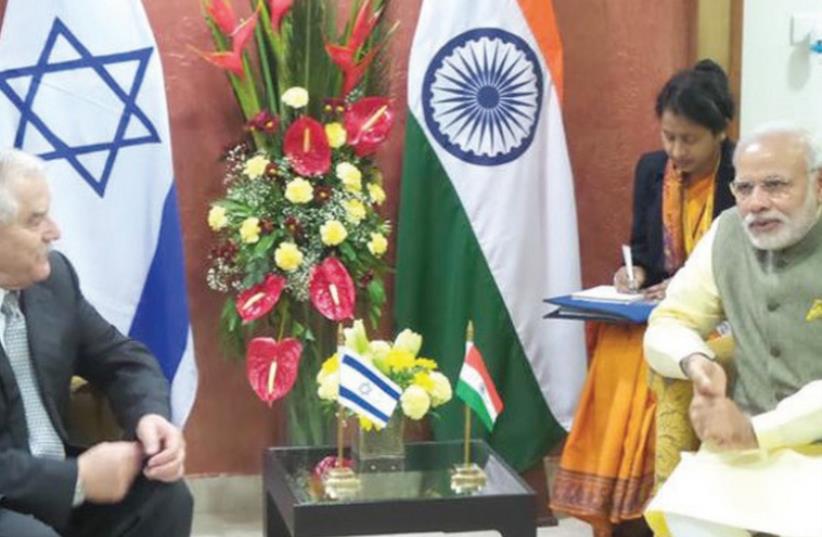 AGRICULTURE MINISTER Yair Shamir meets with India’s Prime Minister Narendra Modi (top) and agricultural partners in Gujarat.
(photo credit: EMBASSY OF ISRAEL IN INDIA)
Advertisement
As the northern Indian state of Haryana announced its intention to launch a series of irrigation projects modeled after Israeli techniques, officials from both countries continue to laud their ever-expanding agricultural cooperation.Indian press outlets reported on Monday that Haryana – located just northwest of Dehli – would be initiating micro-irrigation projects based on Israeli expertise at 14 sites throughout the state over the course of 2016. Haryana Agriculture Minister Om Prakash Dhankar emphasized how the project would help provide sufficient water supplies for farmers, so that even those at “the tail-end of canals” do not face any difficulties, the Tribune News Service reported.“At present, farmers make arrangements for irrigating their fields, but it is the responsibility of the state to ensure water supply to every field,” Dhankar said, according to the report. “The micro-irrigation scheme has changed the fate of agriculture in Israel, hence it will be launched in Haryana, as well.”While the new micro-irrigation program is a Haryana government plan and not officially an Israeli venture, Israeli agricultural professionals work extensively in both Haryana and the neighboring state of Punjab, as well as around the country, Ohad Horsandi, the spokesman for the Israeli Embassy in New Dehli, told The Jerusalem Post last week.The 14 micro-irrigation projects being arranged by the government of Haryana will be based on the model of existing “Centers of Excellence” that Israel has set up throughout India, as part of a larger Indo-Israel Agriculture Project, Horsandi explained.The centers each focus on different crop types, bringing Israeli know-how to local farmers through hands-on training with Israeli experts and technology.“From our point of view this is another proof of the effectiveness and impact of this project if a state decides to ‘duplicate’ this model of Centers of Excellence and do it independently,” Horsandi said.The Indo-Israel Agriculture Project is the collaborative effort of a number of bodies, including the Israeli Embassy, Indian state and federal government bodies, the Indian Agriculture Ministry’s Mission for Integrated Development of Horticulture and Mashav: Israel’s Agency for International Development Cooperation in the Foreign Ministry. The project has been unfolding in three stages, with the first occurring from 2009-2012, the second from 2012-2015 and the third in 2015-2018, according to information provided by Dan Alluf, counselor for international cooperation for the embassy and Mashav.Thus far, there are 26 Centers of Excellence across India either already operating or in the works, with 15 fully active at the moment, the document said. These 26 centers exist in nine states: Bihar, Gujarat, Haryana, Karnataka, Maharashtra, Punjab, Rajasthan, Tamil Nadu and Uttar Pradesh and span many different crops categories, like vegetables, mango, citrus, pomegranate, floriculture, dates and beekeeping.Daniel Carmon, Israel’s ambassador to India, emphasized the country’s ongoing commitment and desire “to intensify this unique cooperation in agriculture that Israel shares with India.”“Our activity in the past few years has shown us the effects that this project has on increasing the productivity and crop diversity of farmers across India,” Carmon said.“The fact that this cooperation is expanding even further to more states and more parts of India demonstrates the interest the Indian side has and the belief this cooperation can and will make a difference on a crucial issue like food security in a country of more than 1.2 billion people.”In Haryana specifically, there are already five Centers of Excellence operating or slated to be opened, Horsandi said. A vegetable center is already fully active in Karnal, as is a citrus and pomegranate center in Mangiana.A subtropical mango center in Ladwa is scheduled to be fully active and inaugurated by March or April, while a beekeeping facility in the Kurukshetra district is partly active and a floriculture site in the Jhajjar district is under development.A vegetable center and a citrus center are both fully active in the neighboring state of Punjab, in Kartarpur and Hoshiyarpur, Horsandi said.Now in the initial stages of its third phase, the Indo-Israel Agriculture Project will be aiming to open 10 more completely new Centers of Excellence in six more states, he explained. The new states to be involved in the expansion include Andhra Pradesh, Telangana, West Bengal, Madhya Pradesh, Goa and Mizoram.In addition to boosting the number of states to receive centers of excellence, the third phase of the project also will be widening the scope of agricultural fields explored at the facilities. Some such new activities are expected to include post-harvest technologies, water recycling, agricultural machinery, organic farming and new crops, according to the information provided by Alluf.Outside of the framework of the Indo-Israel Agriculture Project, the Israeli Embassy, Mashav and the state government of Haryana are also in the processing of setting up a center for dairy production.Horsandi credited the state of Haryana for its particularly progressive stance toward agriculture, stressing that this attitude has enabled both the area’s centers of excellence, the dairy facility and the 14 micro-irrigation projects to move forward.Although describing Israeli experience as “highly needed” in India’s agricultural sector, Carmon stressed that such expertise “would have been irrelevant without a committed partner on the other side, which I’m very happy to say that we have.”“Mashav, as the leading partner of this project on the Israeli side, has more than 50 years of experience of sharing best practices in agriculture across the world,” Carmon said. “When you go to remote rural areas in India and hear from the farmers themselves what effect Israeli agriculture technologies and Israeli experts have brought to them through this project, you know that you made a difference.“We are now looking forward to introducing other advanced technologies in the dairy sector and in water treatment – two areas in which Israel is a world leader,” the ambassador added.