A rock star, 9 congressmen, and one solar field

U2 frontman Bono pays a visit to American-owned Gigawatt Global facility in Rwanda. 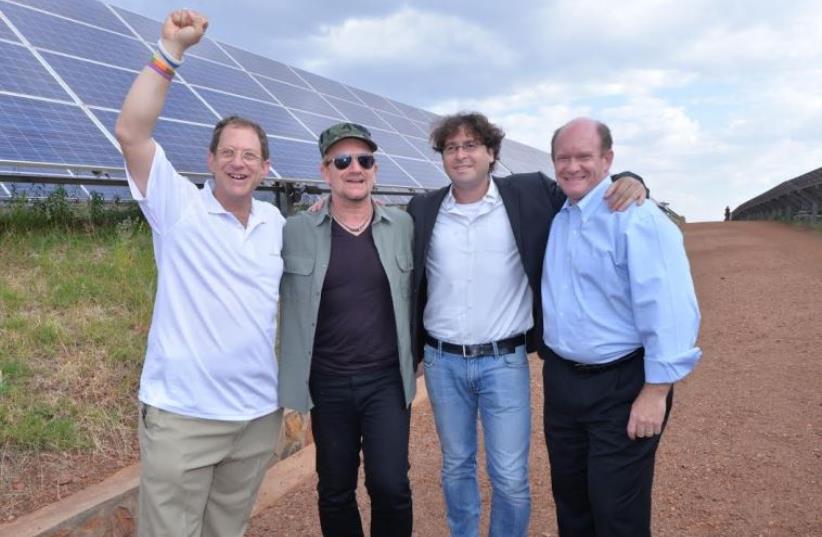 U2 LEAD SINGER BONO (second left) poses yesterday at the Gigawatt Global facility in Rwanda with (from left) company founder and president Yosef Abramowitz, co-founder Chaim Motzen and US Sen. Chris Coons
(photo credit: GIGAWATT GLOBAL)
Advertisement
On a “Beautiful Day” amid the tree-dotted mountains of eastern Rwanda, U2 frontman Bono symbolically knighted Israel’s own “Captain Sunshine” with two karate chops in place of the traditional sword ceremony.“This is really history in the present... I like history in the present, living history, making history, writing history,” Bono said on Wednesday afternoon at the site of the Gigawatt Global solar field.The U2 lead singer and activist was speaking to Yosef Abramowitz – aka Captain Sunshine – the American-Israeli co-founder and president of the Gigawatt Global company.Set on the land of an Israeli-inspired Agahozo- Shalom Youth Village, Gigawatt Global’s $23.7 million, 8.5-MW field supplies about 6 percent of Rwanda’s power. The field, located about 60 km.from Kigali in Rwanda’s Rwamagana district, was launched at a February 5 ceremony and is expected to harness the sun’s light for 25 years. Made up of 28,360 photovoltaic panels, the facility is the first utility-scale solar field in East Africa and the largest on the African continent outside of South Africa and Mauritius.The Rwandan field is also the first project to be grid-connected under the framework of the United States Power Africa initiative – a program launched by President Barack Obama in June 2013 that aims to add more than 30 GW of cleaner energy to Africa, or enough to power 60 million homes and businesses.“This field is the White House’s and Power Africa’s first completed proof of concept – that indeed, America can catalyze development in Africa not just through elections but also electrons,” Abramowitz told Bono and a US congressional delegation.Bono joined nine US representatives visiting the Rwandan solar field on Wednesday, who were stopping in several African countries to explore ways that the US and Africa could expand economic development opportunities, according to a press statement from Sen. Al Franken (D-Minnesota). Their visit also coincides with the reintroduction of the Electrify Africa Act, which if passed, would provide congressional authorization for Power Africa.The Electrify Africa Act is backed by the ONE Campaign, co-founded by Bono, which works to fight extreme poverty and disease, particularly in Africa. The act is co-sponsored by Sen. Chris Coons (D-Delaware), who was also among the congressional delegates at the field on Wednesday.In addition to Franken and Coons, the other congressmen and women included Sen. Jeff Merkley (D-Oregon); Rep. Kay Granger (R-Texas); Rep. David Cicilline (D-Rhode Island); Rep.Betty McCollum (D-Minnesota); Rep. Terri Sewell (D-Alabama); Rep. Kyrsten Sinema (D-Arizona) and Rep. Joe Kennedy III (D-Massachusetts).“We’re pleased to be the poster child for Bono and Electrify Africa,” Abramowitz told The Jerusalem Post on Thursday.The 8.5-MW Gigawatt Global field is situated on a 20-hectare plot overlooking the Agahozo- Shalom Youth Village, which is home to students orphaned during or after the Rwandan genocide. Established in December 2008, the village was the brainchild of Jewish South African- American attorney and philanthropist Anne Heyman, who died in a horse riding accident in January 2014. The fees paid by Gigawatt Global to lease the solar field’s land contribute to the village’s expenses.“I hope this project serves to demonstrate how fast a solar energy project can be completed in sub-Saharan Africa, and that it catalyzes many more such projects on the continent – projects that by providing more energy to the grid, will substantially improve the lives of millions of people,” said Chaim Motzen, co-founder of Gigawatt Global and the driving force behind the project since its start.Gigawatt Global defines itself as an American- owned Dutch company with an objective of developing, financing, constructing and activating utility-scale solar fields in emerging markets.Debt for the Rwandan field came from the Dutch Development Bank FMO and the Emerging Africa Infrastructure Fund, while mezzanine debt was provided by Norfund. Equity came from Scatec Solar – which also provided engineering, procurement and construction and operation and maintenance services for the project – as well as from Norfund and KLP Norfund. Grants were received from the US Government’s Power Africa as well as from the Energy and Environment Partnership. Legal representation was provided by Norton Rose Fulbright. Raffi Mardirosian served as a key project development partner.In his Wednesday address to the U2 frontman and the congressional delegation, Abramowitz stressed how the Gigawatt Global field strays from “the predictable battle lines between the developed and the developing world” and provides a new solution in the face of a changing climate.For his part, Bono took to Instagram and Twitter, posting a picture of the pristine blue panels under the Rwandan sky, with the caption: “Looking to the future.”