Antiquities Authority building National Campus for the Archeology of Israel

An archeological hub for visitors from both Israel and abroad, the campus will also house an educational center for students. 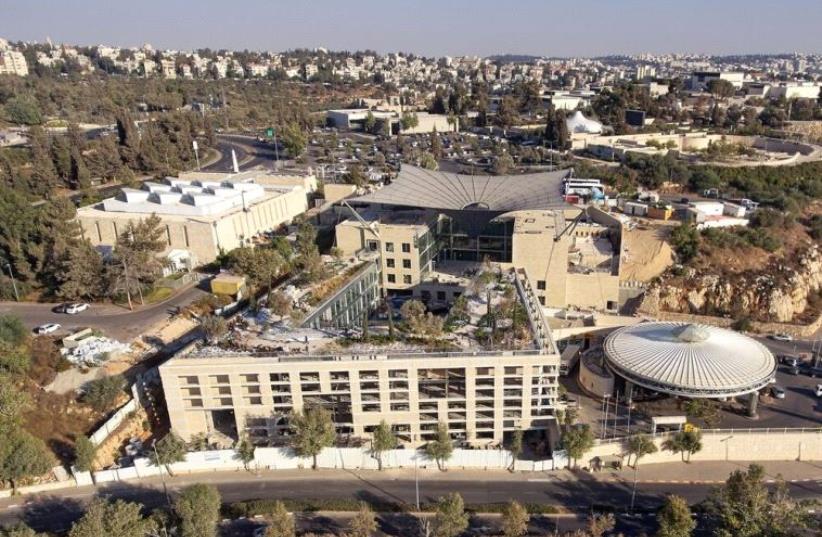 National Campus for the Archeology of Israel
(photo credit: ARDON BAR-HAMA)
Advertisement
Visitors to Jerusalem will soon be able to walk through a history of the city’s archeological heritage at a new building in the capital’s Museum Hill quarter.The Jay and Jeanie Schottenstein National Campus for the Archeology of Israel, expected to open to the public in about a year, is under construction in the Givat Ram neighborhood between the Israel Museum and the Bible Lands Museum.The NIS 400 million, 36,000- sq.-m. building will house archeology laboratories, hundreds of thousands of artifacts and the National Library for the Archeology of Israel, according to a statement from the Antiquities Authority.The campus is expected to be a hub for visitors from both Israel and abroad. It will include an educational center that will provide students with firsthand experience with relics uncovered hundreds and thousands of years ago.“Just a small hop, skip and a jump over to the archeology campus will allow every one of us to make a gigantic leap back in time, to the history of mankind and the country,” Antiquities Authority director Israel Hasson said. “The heritage belongs to all of the public, and it is our obligation to share with everyone the treasures that were safeguarded until now in the storerooms.”An initial portion of the building was unveiled at a press conference at the construction site on Sunday.During the Succot holiday, Prime Minister Benjamin Netanyahu and the building’s numerous donors are scheduled to attend a ceremony inaugurating the public wing.To finance the building’s construction, tens of millions of dollars were raised from 26 donors along with funding from the state, the Antiquities Authority said. Once complete, the campus will be the world’s largest facility to document the archeological heritage of the Land of Israel, and will serve as a national center for the collection, conservation, study and presentation of the country’s antiquities.“On this campus, visitors will be able to take part for the very first time in the fascinating process of archeological conservation that up till now was carried out behind the scenes, and experience the rich past of the country firsthand as it takes shape before their eyes,” Hasson said. “The campus will be an attraction for tourists from Israel and abroad and a home for anyone who wants to know where he comes from and where he is going.”The building itself, designed by architect Moshe Safdie, will be a unique specimen, with a tensile transparent roof that will simulate the tentlike canopies used to shade excavations, according to a description from the Antiquities Authority. The roof will direct rainwater to a pool in the courtyard below and create a flowing cascade of water.The campus’s three levels are designed to descend like excavation strata, and will feature courtyards, galleries and paths that overlook the artifacts.The first exhibition dedicated to new discoveries will explore the story of the historic Caesarea harbor shipwreck that was laden with bronze statue fragments. The exhibit will depict how archeologists excavated the artifacts underwater.The campus’s eastern rooftop will feature mosaics, many of which have never been on public display. Among the pieces will be the Hammam mosaic from Beit She’an, another that shows Samson carrying the gate of Gaza on his back and a colorful mosaic from a Byzantine church nave.A special gallery will focus on ancient glass, including precious glass vessels buried with the deceased as funerary offerings. The campus will also house the World Center for the Dead Sea Scrolls that will include a section where scrolls undergo conservation, a climate-controlled center for more than 15,000 scroll fragments, a library and gallery.According to the Antiquities Authority, “The campus will serve as an open, active house endeavoring to make the cultural heritage that belongs to all of us accessible to the general public: millions of archeological treasures of the societies and religions that lived in Israel which were excavated and that will be excavated in the future in archeological excavations.”