The units, which began operating in the 1980s, are "the oldest, least efficient and most polluting coal-fired units in Israel's electricity system," according to the Environment Ministry report. 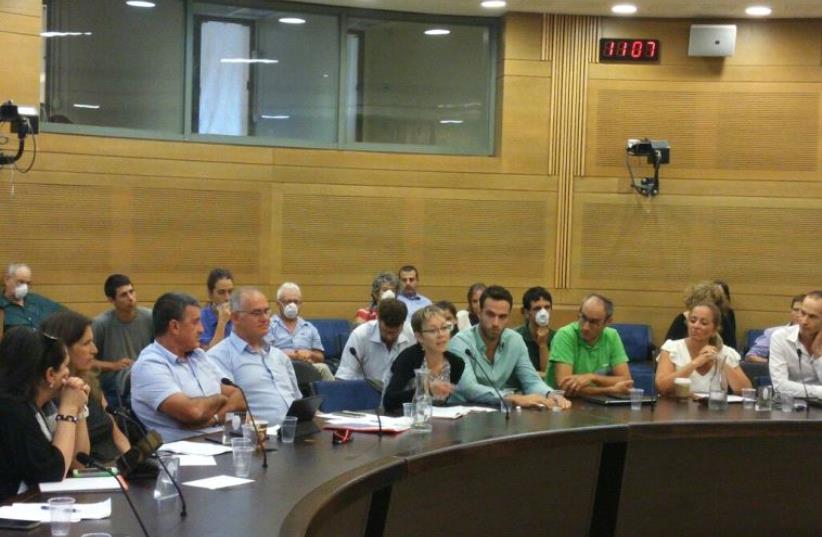 Protestors from Greenpeace Israel storm through a Knesset meeting.
(photo credit: GREENPEACE)
Advertisement
Parading a poster with a man’s face covered in soot, protesters from Greenpeace Israel on Monday stormed through a Knesset meeting about a coal-fired power plant’s future.Their bright yellow poster, which featured the dusty face of National Infrastructure, Energy and Water Minister Yuval Steinitz in an Israel Electric Corporation hardhat, read in Hebrew: “Steinitz, don’t work for C-O-A-L.Advance solar energy!” The Greenpeace activists also unveiled a plaque with the minister’s coal- coated likeness, accompanied by the slogan: “On behalf of your activities for coal, you’ve gone above and beyond. Wishing success along the way with renewable energy.”The Economic Affairs Committee convened on Monday to discuss the fate of the aging Units 1 through 4 at the Orot Rabin plant in Hadera. The committee gathered ahead of an upcoming Energy Ministry decision about whether to install new scrubbers on the units or disable them entirely in favor of an alternative.A day prior to the committee meeting, the Environmental Protection Ministry published a report advocating disabling the units entirely and replacing them with natural gas installations – a move that could save the market some NIS 12.5 million, according to the ministry. The units could be disabled but maintained in reserve in case of an emergency, allowing them to be revived within two weeks if necessary, according to the report. 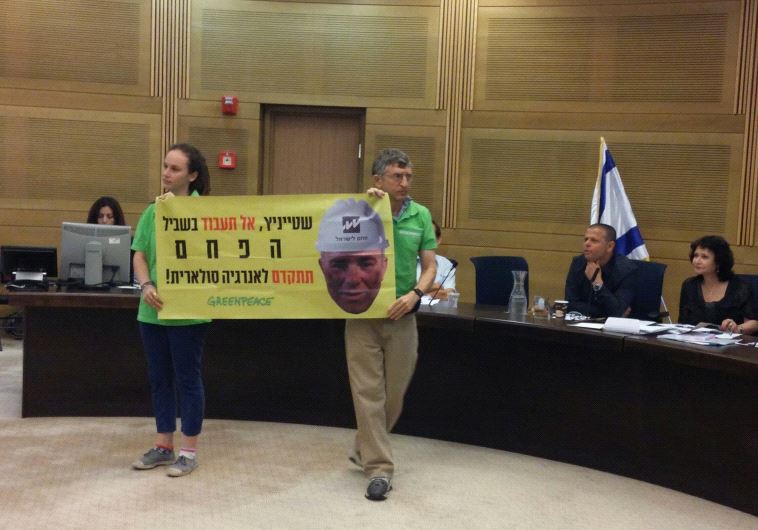 Protestors from Greenpeace Israel storm through a Knesset meeting. Credit: GreenpeaceDescribing the units, which began operating in the 1980s, as “the oldest, least efficient and most polluting coal-fired units in Israel’s electricity system,” the Environment Ministry report stressed the urgency of deciding whether to invest the resources necessary to extend their lives or to stop their activity.The Greenpeace activists favored the solution proposed by the Environment Ministry’s document.“Together with the residents, we say today in the Knesset that it’s us or the coal,” said Dr. Jonathan Aikenbaum, a campaign director for Greenpeace.“Minister Steinitz has a unique opportunity not to be remembered as the person who perpetuated coal for generations, but who led Israel to a safe and clean alternative system.”Aikenbaum stressed the importance of ending the use of coal and transitioning to renewable energies as part of Israel’s path toward reducing greenhouse gas emissions and curbing the illnesses associated with burning coal.MK Yael Cohen Paran (Zionist Union), who had requested the Economic Affairs Committee take place on Monday, likewise advocated disabling the coal-fired units, arguing that further investment in the facilities would be “unnecessary and wasteful.”“We must and can decide to cease burning coal today,” she said. “Israel has abundant sun and is rich in natural gas – it is possible to stop burning coal, it is possible to save lives. The investment of billions from public funds in the scrubbers project would bring a tremendous waste, and would continue the burning of coal for the next 20 years. We must change the conservative perception of the Energy Ministry and promote renewable energy and gas.”In response to the discussion, Shaul Meridor, National Infrastructure, Energy and Water Ministry director-general, explained that his ministry began the scrubbers project following a decision of the Environmental Protection Ministry on the subject – noting that the same ministry has now expressed uncertainty about the economic viability of the scrubbers.“The responsibility over power supply at any moment lies with us,” Meridor said.“Energy Minister Steinitz was the first energy minister to order a 15 percent reduction of coal used in power plants, and we are considering a further reduction without harming energy security. This is a very significant step.”The Energy Ministry examined the possibility of shutting down while maintaining the units in question, but found that no other coal-fired plant in the world has successfully employed this method, according to Meridor.“We will not stop looking for solutions, and will do everything possible to decrease the use of coal to minimum, but if we cannot satisfy the demand for electricity, our situation will be very serious,” he said.