The hazy, windy weather is not only cancelling flights, but it could cause health problems too because of elevated air pollution levels. 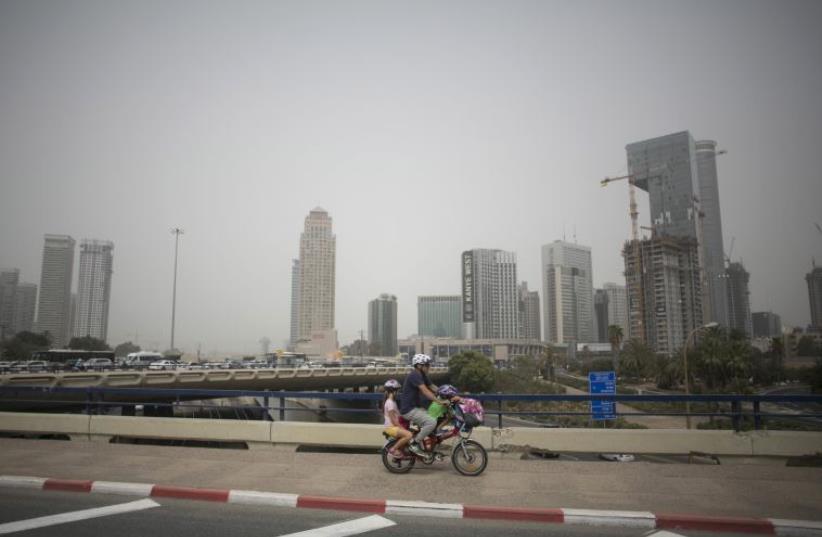 A man rides a bicycle during a sandstorm in Tel Aviv
(photo credit: REUTERS)
Advertisement
A surprise dust storm mixed with strong winds hit the country late Thursday night, resulting in cancelled flights and possible health problems due to the high levels of air pollution.Many domestic flights have been cancelled. Arkia Airlines and Israir Airlines both announced around noon that all of their flights would be cancelled for the rest of the day, as the weather did not seem to be improving. Arkia said it would provide buses to Eilat in place of their 14 cancelled flights.Earlier in the day, the Eilat and Tel Aviv Sde Dov airports were only allowing takeoffs, but not landings, due to the high winds and low visibility.At various local airports in the North, all flights were cancelled in the morning.Visibility at Eilat's airport was reported as only 3,000 meters, while at the nearby Ovda airport, there was only 1 kilometer of visibility due to the storm. At Sde Dov Airport, there was a somewhat-better 2 km. of visibility. Ben-Gurion International Airport has not been affected by the weather and was operating as normal.The storm could also prove dangerous for those in weak condition and as such, the Environmental Protection Ministry advised people with heart and lung conditions, children, the elderly and pregnant women to refrain from performing any strenuous physical exertion. The ministry said that air pollution levels will remain high until an expected rain storm comes in sometime in the afternoon.