"They don't have the same language, so they can't communicate,” urban farming consultant Lavi Kushelevich told The Jerusalem Post on Wednesday. “But they can communicate through food.” 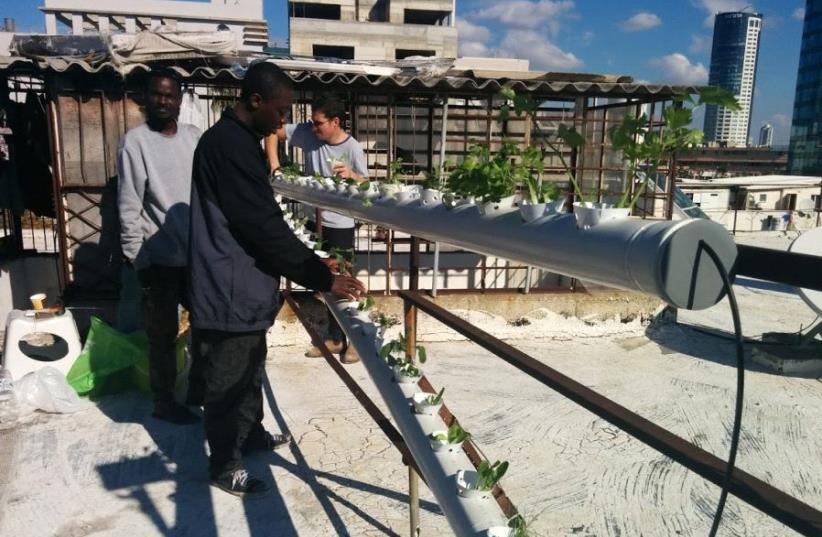 Hydroponic farm for refugees, foreign workers launches on Tel Aviv rooftop
(photo credit: ASSAF OSTROVSKI)
Advertisement
On the toughest street in the toughest neighborhood of south Tel Aviv, Darfurian refugees, Chinese workers and Israelis are working together to make a rooftop blossom. "They don't have the same language, so they can't communicate,” urban farming consultant Lavi Kushelevich told The Jerusalem Post on Wednesday. “But they can communicate through food.”Kushelevich, 29, is the entrepreneur behind the Rooftop Gardens project, a venture that is bringing together an unlikely set of neighbors to cultivate a hydroponic farm on the roof of the Fein 11 building in Tel Aviv’s dicey Neve Sha’anan quarter. Since the project began about a month-and-a-half ago, the building’s diverse array of inhabitants – refugees and foreign workers from Darfur, Nigeria, Eritrea, Sudan and China, as well as Israelis – have been meeting each Saturday to take care of the garden and learn growing techniques. “The main issue today is that we need to find a way to grow our food very close to our plate,” Kushelevich said. “Waste of food mainly [occurs] because the farmer is very far away from our plate. Urban farming is part of the solution to the food crisis.”The new Rooftop Gardens project is aiming to tackle these challenges by bringing together community members to grow food using innovative hydroponics, as first reported by the Middle East sustainability news site Green Prophet. “When we grow food very close to our plate, it's in the cities, and land is a resource that is not that available in cities – and it's expensive,” Kushelevich said. “One of the unused spaces in the city is rooftops,” he continued. “We have a rooftop, but we need to find technology that will provide the food we need to grow.”For Kushelevich, hydroponics precisely satisfied that need. Unlike plants cultivated in traditional soil gardens, those grown through hydroponics rely on water-based nutrient solutions. The hydroponic systems at Rooftop Gardens came to the Neve Sha’anan building from Green In The City (Yarok Bair), the urban farming complex on the Dizengoff Center’s rooftop, where Kushelevich also serves as a lecturer.  Among the many advantages of using hydroponics is the lightweight nature of the system compared to soil, as well as the simple installation and easy ability to grow food, Kushelevich explained. “People today don't want to work in agriculture; they just want to make food by pushing a button,” he said.While Rooftop Gardens does have some soil-based plants as a “living wall” at the site, the crops grown for consumption are in the hydroponic system, according to Kushelevich. Some of these crops include lettuce, basil, cucumbers, eggplants, tomatoes, mint, strawberries and bok choy – the latter of which is a cultural staple for some of the workers. In order to help meet the specific needs of the various people living in the building, Kushelevich said that he is working on importing special seeds from some of their countries. "Those residents are getting expertise in growing food in hydroponic systems, the new generation of agriculture,” he said. Kushelevich targeted this space in particular for the project after a friend put him in touch with an Israeli living in the building. Ultimately, he said he raised the funds necessary to build the infrastructure from private philanthropists. Now each Saturday, neighbors that formerly had little contact with each other come together to study and take care of the crops, joined by a number of Israeli volunteers. "It's a very dynamic thing to live in that place,” he said. Kushelevich’s hope is to see this type of urban farm replicated in buildings across Tel Aviv, as such ventures can make a city more resilient. "Urban farming is a tool toward making a good community," he said.