Team uncovers boat in Haifa recently returned from the Mediterranean filled with crates of the sea creature. 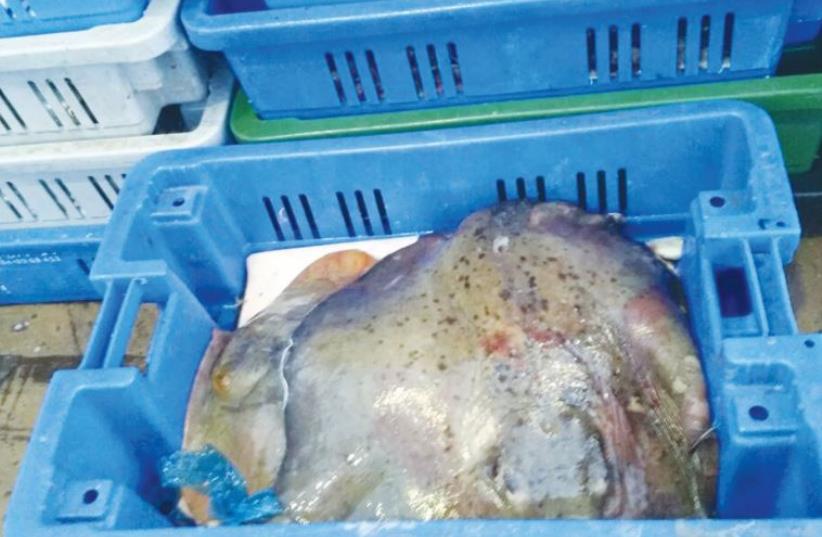 ONE OF the many gray stingrays, a protected species, that were discovered yesterday.
(photo credit: SPNI)
Advertisement
Amid a campaign against the hunting of protected marine wildlife, a team of environmentalists on Wednesday discovered a trawler filled with one such species.A group from the Society for the Protection of Nature in Israel’s Hof Hacarmel Field School arrived at the Shavit Fisherman Anchorage in Haifa, where the Kishon River meets the Mediterranean Sea, early Wednesday morning. While distributing information regarding the illegality of fishing for protected aquatic life, the team members uncovered a boat that had recently returned from the Mediterranean Sea, filled with crates of protected round stingrays, according to SPNI.Upon discovering the stingrays, they immediately reported the incident to the Israel Nature and Parks Authority for further handling of the situation and enforcement procedures.The ongoing campaign against fishing and hunting such wildlife is being conducted jointly by SPNI and the INPA.Although fishing for rays and sharks, which have been considered protected species since 2005, is entirely illegal, their capture continues with trawling boats causing particular damage in this sector since they tend to pick up protected species together with regular fish and then sell them rather than returning them to the sea, SPNI has found.At the anchorage on Wednesday morning, the field school team members made use of a new smartphone app called “Sea Watch,” which SPNI recently launched to engage the public in protecting sea and river ecology. The app enables users to file real-time reports about a variety of marine environmental incidents and hazards, including sales of endangered species, animal injuries, abandoned netting, uncontrolled sewage flow and the presence of invasive species.“The example from today is exactly the way the public can truly influence nature conservation,” said Alon Rothschild, biological diversity coordinator for SPNI.“Have you seen illegal fishing or another hazard related to the sea? Document it, record the details, enter the app and report it in real time. The information goes directly and rapidly to those responsible