"Mr. Rony Malka’s 40-year career with the INPA, the country’s wildlife protection agency, has been exceptional," a statement from the Animal Welfare Institute said. 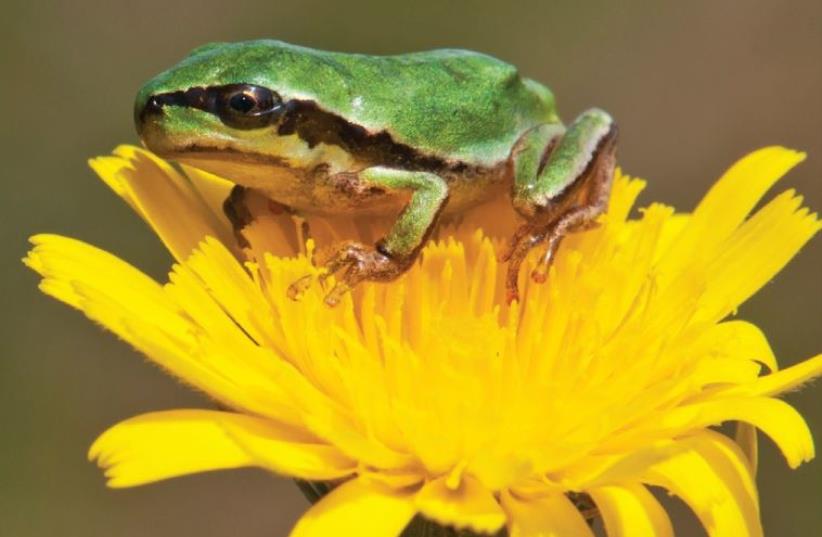 The Middle East tree frog (ilanit)
(photo credit: ITSIK MAROM)
Advertisement
Rony Malka, director of the Israel Nature and Parks Authority’s law enforcement division, was honored in an international forum on Monday night, for his 40 years of commitment to protecting the country’s wildlife.Malka was among 22 people from around the world to receive the Clark R. Bavin Wildlife Law Enforcement Award at the 17th Conference of the Parties of the Convention on International Trade in Endangered Species of Wild Fauna and Flora (CITES) in Johannesburg, South Africa. CITES is an international agreement to ensure the survival of wild plants and animals, which countries adhere to voluntarily.The award was presented to Malka and his colleagues by the Washington, DC-based Animal Welfare Institute, for their excellence in combating crimes involving wildlife, according to the organization.“Mr. Rony Malka’s 40-year career with the INPA... has been exceptional,” a statement from the Animal Welfare Institute read.In addition to leading the INPA’s law enforcement division, Malka also serves as head of Israel’s management authority for CITES.Some of Malka’s accomplishments cited by the Animal Welfare Institute include reestablishing populations of white oryx and onagers, launching a campaign to create the Marine Peace Park in the Gulf of Aqaba and developing a new enforcement regime to regulate wildlife trade. He also improved cooperation among Israel’s law enforcement agencies and was a key figure in establishing regulations to prohibit the private possession of primates, raptors and wild carnivores, as well as banning falconry and the use of animals in circuses, the organization said.Internationally, Malka helped the Kenya Wildlife Service establish a wildlife forensics laboratory, and was instrumental in creating Interpol’s Wildlife Crime Working Group.The Animal Welfare Institute also praised Malka for his efforts to promote regulations for designating all CITES-listed species as protected under Israeli law.“Mr. Malka obtained a law degree to improve his abilities to combat wildlife crime and, throughout his career, taught generations of youngsters that wildlife belongs in the wild,” the statement added.Since 1997, 96 individuals and agencies from 30 countries have received the Clark R. Bavin Wildlife Law Enforcement Award, named after the late chief of the US Fish and Wildlife Service’s Office of Law Enforcement.Twelve people were posthumously honored this year: Emily Stephen Kisamo, head of the Tanzania National Parks and the Lusaka Agreement Task Force, and 11 members of the Congolese Institute for Nature Conservation and the Democratic Republic of the Congo’s armed forces – all of whom sacrificed their lives to stop elephant poaching in Garamba National Park.“Through stellar efforts to combat wildlife crime,” said Cathy Liss, Animal Welfare Institute president, “these award recipients have demonstrated a dedication to wildlife protection, which should be an example to all who cherish the biodiversity on this planet and who are committed to justice against wildlife criminals, who illegally capture and kill wildlife out of greed and callousness.”The INPA welcomed Malka’s award and expressed the authority’s commitment to the future of wildlife protection.The win, according to the INPA, “reflects the appreciation of the activities that the INPA conducts day and night in the field of law enforcement for the good of preserving flora and fauna in Israel.”“We will continue with vigor in the local and global effort to protect the nature in our midst – without nature, man does not have the right to exist,” the authority added.

Tags wildlife in israel
Advertisement
Subscribe for our daily newsletter