In Kfar Saba’s Hayarok neighborhood, for example, drainpipes on the street funnel water underneath the fairly new neighborhood to a park at the bottom of a hill. 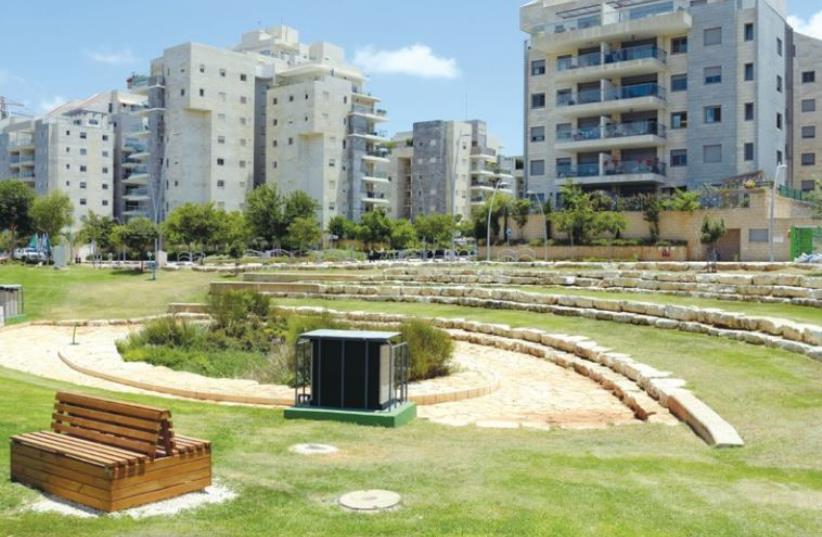 BENEATH KFAR SABA’S Yarok neighborhood the local hybrid biofilter quietly purifies the town’s groundwater.
(photo credit: YOSSI ZELIGER)
Advertisement
Israel is a leader in desalination and gray water use, but recycled rainwater may prove to be the next frontier in making every drop count.The Center For Water-Sensitive Cities in Israel opened in Kfar Saba last week, and all those involved are hailing it as a vision of how Israeli cities will make use of every drop of water. It is partnered with the Australian CRC for Water Sensitive Cities and Keren Kayemet LeIsrael-Jewish National Fund to begin designing cities with water in mind.In Kfar Saba’s Hayarok neighborhood, for example, drainpipes on the street funnel water underneath the fairly new neighborhood to a park at the bottom of a hill. To the naked eye, all one sees is a well-manicured grassy park with a pond in the middle.However, what lies underneath is a filter system, called a Biofilter, that can collect between 2,000 and 7,000 MCM of dirty rainwater, clean it and reintroduce it to the natural aquifer or use it to water the lawn. Israel already has two other such systems, located in Ramle and Bat Yam.The Kfar Saba biofilter is a “hybrid” one and the first of its kind in the world. It keeps on working even during the long rainless stretch of the year. The Israeli center’s director, Yaron Zinger, calls it a type of “aquifer dialysis.”It pumps the neighborhood’s groundwater, which Zinger said is some of the most polluted in the country, filters it through the biofilter and reintroduces the clean water back into the ground.“This is a vision, the aim for the country of the concept of a water sensitive city,” KKLJNF’s Central Region director Haim Messing told The Jerusalem Post. He is hoping the center and projects that come from it will spark a sort of social change. “The goal is for the city – its mayor, its residents – to think how to use its water,” he said.Cheryl Batagol, the chairwoman of the Australian government’s Cooperative Research Center for Water Sensitive Cities and of the Environmental Protection Agency in Victoria, attended the Israeli center’s opening and has been following the project since center director Yaron Zinger was a PhD student and researcher at Monash University in Australia.“It’s a multidisciplinary approach,” she said of the initiatives that the CRC aims to promote. Several water-sensitive urban design projects have already been implemented in Australia and biofilters number in the thousands, according to her estimate.Batagol said that it takes a collaborative approach among engineers, architects, landscapers and even behavior specialists to design urban spaces that are not just eco-friendly, but a joy to live in as well. “If you bring all of them together, they move outside of their silos and come up with things like this,” she said.In Australia, she said, water sensitivity is regulated and all new constructions are required to find a solution for their rainwater runoff or pay a “fine” that goes toward a local biofilter system.Messing hopes that eventually similar regulations in Israel will give cities incentives for water-sensitive design at new developments. He also noted that it could prove to be financially savvy to reuse the rainwater for watering parks or agriculture. Though he said there are no additional water sensitivity projects in the works, he hopes the new center will spark change.