The new power is being authorized to ensure that Israel achieves its goals of making 10% of the country’s electricity supply renewable by 2020. 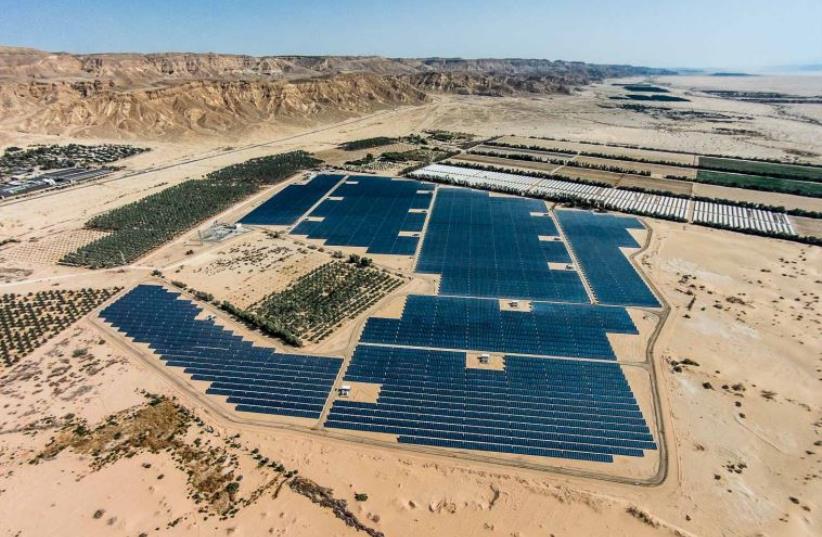 Aerial view of the 40-megawatt Ketura Solar field
(photo credit: EGE)
Advertisement
Following a two-year freeze on any new solar energy development, the Public Utility Authority said Monday it will issue more than 1,000 megawatts of fresh quotas.The new power is being authorized to ensure that Israel achieves its goals of making 10% of the country’s electricity supply renewable by 2020, according to the PUA.“[This] is great news for the energy sector in Israel and is expected to accelerate, in a short time, the volume of renewable energy produced from just 2% today to full compliance with the government’s objectives,” said PUA chairman Assaf Eilat.In a first for Israel, the solar developers will compete for tariff rates based on their own proposals rather than signing up for predetermined feed-in tariff rate in a process that will promote transparency and efficiency while minimizing the cost of electricity to the public.“[The new quotas] pave the way toward a future replete with clean energy,” said National Infrastructure, Energy and Water Minister Yuval Steinitz. The authority’s plenary published the quotas Sunday night as part of a regulatory hearing process that requires the PUA to hold at least six significant rounds of competition for low, high and extra-high voltage projects, at predetermined times.Winners of the competitive-bidding process must realize their allotted quotas by establishing solar facilities in different areas around the country,without committing in advance to the specific sites.Low and high voltage facilities will need to be completed within 18 months, and extra-high voltage within 36 months, according to the PUA.Facilities may be built without obtaining conditional licenses and without determining binding milestones prior to the commercial operation of the project, but bidders will need to provide a guarantee of $20 per kilowatt in the proposal stage and $70 per kilowatt in the winning stage, accompanied by a feasibility study on network connection for extra-high voltage projects.The competitive procedure will take place over a one-year period with the first phase expected to be in January 2017, the PUA said.Dorit Banet, CEO of the Eilat-Eilot Renewable Energy Initiative, called the move a significant step toward exploiting Israel’s potential, said solar energy can reach 60% of the nation’s total energy consumption.”“We all expect that, after three years of decline in the solar market, we will set out on a new path of energy that is cleaner and more economical than any existing alternative in the country,” Banet said.Eitan Parness, CEO of the Green Energy Association of Israel, also praised the PUA’s decision, stressing its unprecedented scope and size.”“We waited for years for this decision, and it is likely to generate a wave of economic development, especially in the periphery,” Parness said. “The tender process testifies to the maturity of the field, which has passed from a world of subsidies to a world of a free and competitive market.”