Israel, Turkey discuss joint gas pipeline as ties resume after six-year rupture
Advertisement
Thawing a six-year freeze in ministerial-level encounters between Israel and Turkey, the energy ministers of the two countries met on Thursday to discuss the possibility of exporting the former's gas to the latter, and on to Europe. National Infrastructure, Energy and Water Minister Yuval Steinitz sat down with Turkish Energy and Natural Resources Minister Berat Albaryrak in a planned meeting at the World Energy Council's 23rd World Energy Congress, held this year in Istanbul.  Their meeting was not only the first official ministerial visit between the two countries since their recent rapprochement, but was also the first since the 2010 collapse in diplomatic ties, prompted by Mavi Marmara incident. "This is a token of the normalization process that just started between our two states, between turkey and Israel," said Steinitz, in a press conference for Turkish journalists broadcast live on his Facebook feed, following the meeting. "I came here on behalf of the Israeli government and the Israeli people," he said. "I am confident that most people are eager to see peace and stability in the region and good relations and cooperation – economic cooperation – between Turkey and Israel." 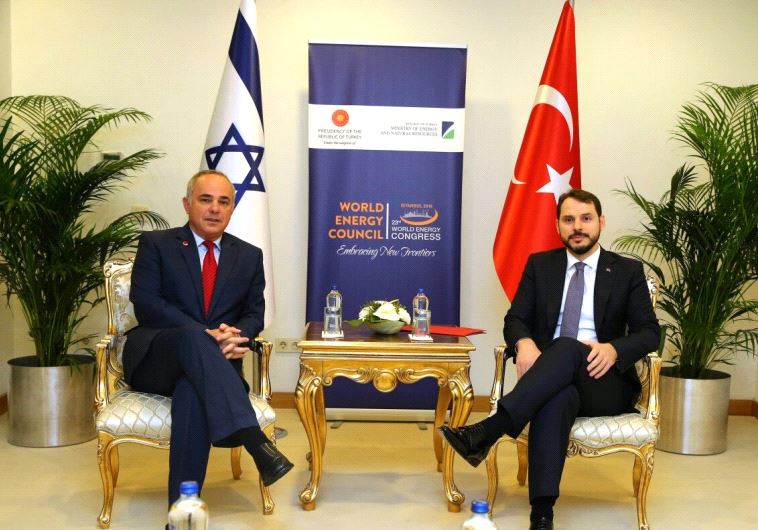 The Israeli and Turkish energy ministers discussed the possibility of exporting Israeli gas to Turkey, as well as the importance of leveraging the energy sector to stabilize the Eastern Mediterranean region as a whole, according to the Israeli ministry. Describing his meeting with Albaryrak as "very good," Steinitz told journalists that the two ministers both discussed energy issues in general and focused more specifically on natural gas, and the possibility of constructing an export pipeline to deliver gas to both Turkey and Europe via Turkey. He stressed, however, that Israel is also considering agreements with other countries, including with Egypt, as well as a potential export pipeline to Cyprus – a country with which Turkey has hostile relations. Just two weeks ago, Steinitz also visited Athens to meet with his Greek and Cypriot counterparts to discuss the idea of laying a similar type of pipeline to Cyprus and then to Greece, which could also connect Israeli gas to Europe. Thursday’s meeting between Steinitz and Albaryrak also comes just two-and-a-half weeks after the stakeholders in Israel's Leviathan reservoir negotiated a $10 billion export contract with Israel's eastern neighbor, Jordan. As per the deal, Leviathan will be supplying a gross quantity of 45 billion cubic meters of gas over a 15-year period to the Hashemite Kingdom, once the basin comes online in the next few years.  "But the Turkish option is very important," Steinitz said on Thursday. "Therefore, what we decided is to establish immediately a dialogue between our two governments, between our two departments of energy, in order to examine the possibility and the feasibility of such a project that will enable us to bring natural gas from the Israeli economic waters and through Turkey to Europe."While explaining to the Turkish journalists that Israel currently has about 900 billion cubic meters of natural gas, Steinitz said that in November, the country is going to be reopening its economic waters for further explorations. "The scientific estimate is that most of the natural gas is yet to be found," he said, noting that such estimates expect up to another 2,200 BCM of gas in Israel's waters. "Therefore, in a few years time we might have approximately 3,000 BCM of gas – this is a lot of natural gas, much more than a little country like Israel can consume."Steinitz also mentioned that Israel would be pleased to see Turkish exploration companies involved in Israel's gas sector. While the minister said that he and his Turkish counterpart discussed other areas of energy cooperation, he stressed that gas was "the most vital issue that we discussed.""We are going to engage in a specific detailed dialogue between our two governments about this in the next coming months," he added.The two ministers also discussed humanitarian issues, such as supplying energy and electricity to the Palestinians in the West Bank and Gaza, according to Steinitz. "Israel is welcoming any involvement of Turkey in improving the life of ordinary people in Gaza,” he said. “Of course we are very careful to keep our security but the issue of improving life of ordinary Palestinians, of the Palestinian population in Gaza, is not against our interest – on the contrary. If the Turkish government and Turkish companies will be involved in improving the lives of ordinary people in Gaza, this is something that was also on the table, and we will do our best in order to enable this."Noting that he was "a great proponent" of the normalization in ties between Israel and Turkey, Steinitz said that Thursday's meeting symbolizes the beginning of "economic results for the benefit of both people, for the benefit of both Turkey and Israel."