"California is facing a severe drought after several arid years," said Gili Ovadia, consul in the Israel Economic Mission to the West Coast. 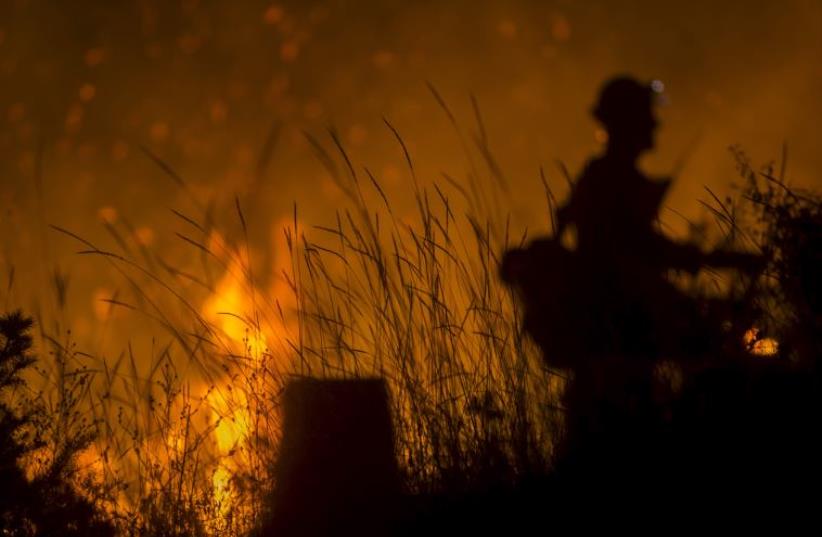 Flames consume dry vegetation at the Saddle Fire in the Shasta-Trinity National Forest near Hyampom, California
(photo credit: REUTERS)
Advertisement
A delegation of Israeli water companies headed to California on Thursday, in order to promote solutions to the severe drought that the coastal state has been facing, the Economy Ministry said that evening.The firms, which hail from the fields of water purification and management, are visiting the state as part of a broader effort to increase cooperation between Israel and California in the water industry. Among the companies in the delegation are the bio-security firm Atlantium Technologies, water filtration specialists Amiad and Triple-T wastewater treatment, the Economy Ministry said. While in California, the Israeli firms will meet with representatives from a variety of companies, such as Leprino Foods, Costco, Coca Cola, Anheuser-Busch and the PSOMAS energy firm, as well as water corporations in Los Angeles and San Francisco. In addition, the Israeli companies will meet with officials in California's Department of Water, the Department of Agriculture and the governor's office, the ministry said. "California is facing a severe drought after several arid years," said Gili Ovadia, consul in the Israel Economic Mission to the West Coast. "The drought has already led to a long series of changes in the state of California, beginning from the public discourse on the issue, public awareness about the importance of saving water, legislative amendments and allocation of resource financing and even the allocation of government funds to adopt water-saving technologies from all over the world."The Israeli delegation to California was organized by the commercial office in the Economy Ministry's Foreign Trade Administration, in cooperation with the Israel Export Institute and NewTech – the ministry's program to promote water and renewable energy technologies. As part of the increasing cooperation in the water sector between Israel and California, a senior delegation from the state will visit Israel for the WATEC exhibition this October in Tel Aviv."Water corporations, private companies and of course governmental units operating in the state of California are looking for ways to improve efficiency and save water, and this is a significant opportunity for Israeli companies specializing in this area," Ovadia said. "There is a strong desire and willingness to adopt the technologies and practices of Israel, and we are here in order to help Israeli companies and open for them the door to business cooperation in the area."