The river is receiving 1.1 million cubic meters of standard drinking water annually to boost its flow. 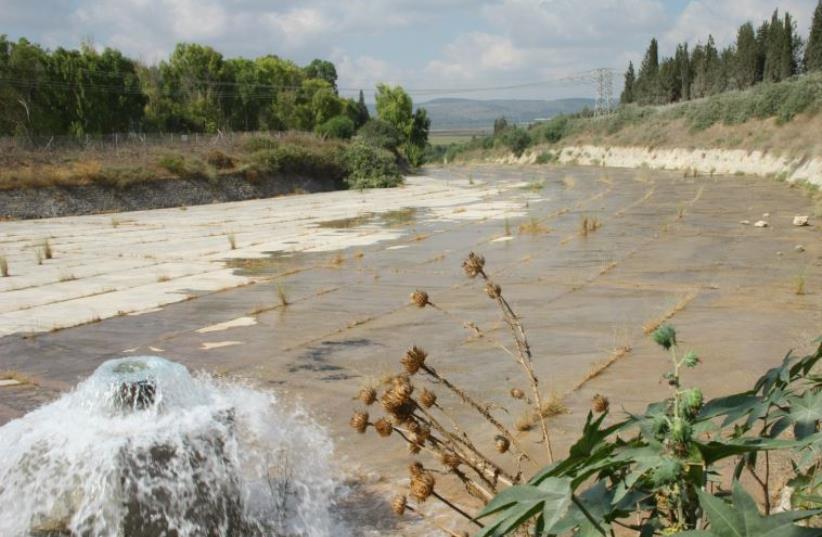 The Kishon River ‏
(photo credit: YONATAN SHAVIT/KISHON RIVER AUTHORITY ‏)
Advertisement
As part of the ongoing rehabilitation efforts of the once highly polluted Kishon River, about 1.1 million cubic meters of water is being pumped annually into the basin to restore its flow, the Kishon River Authority reported on Monday.Beginning in August 2015, the river began receiving a monthly minimum of 144,000 cu.m. of water, with the aim of bringing the flow of the river up to about 200 cu.m. per hour, the authority said.The discharge continued through the end of December and will likely resume again in April, following the rainy winter months. The increased flow will contribute significantly to the ecosystem of the rehabilitated river, according to the authority.Although the water source has initially been standard drinking water as provided by the Mekorot national water company, this supply will eventually be replaced by spring water that is currently being exploited for drinking and irrigation, a statement from the authority said. Government officials agreed on the urgency to use the drinking water for the time being due to the critical need to improve the quality of the river, which is still receiving mostly saline spring water and agricultural runoff.“This is the first step in implementing the water plan for the Kishon River,” said Kishon River Authority CEO Sharon Nissim. “We are working to execute the next stages of the plan, including the release of the main springs in the Jezreel Valley that are now used for irrigation, while providing a suitable substitute for farmers.”The changes in water quality in the river in recent decades have likewise altered the flora and fauna that inhabit the region, giving an advantage to new plants and animals over native species that require fresh water, the authority statement explained. After the high quality water began flowing, the concentration of salts, nitrates and phosphates experienced a 50-percent decrease, and native flora and fauna once again began to flourish, the authority said.The water plan for the river was formulated by the Kishon River Authority, in collaboration with the Environmental Protection Ministry, the Water Authority and the Israel Nature and Parks Authority.Alon Zaks, deputy director for natural resources at the Environmental Protection Ministry, described the resuscitation of Israel’s largest rivers a critical step in the overall revival of the country’s streams.“The Kishon River, which was contaminated for many years, is coming back to life, and the water plan is an additional and important step in its rehabilitation and its return to the public,” Zaks added.