Practice halted in Israel years ago at behest of chief rabbinate. 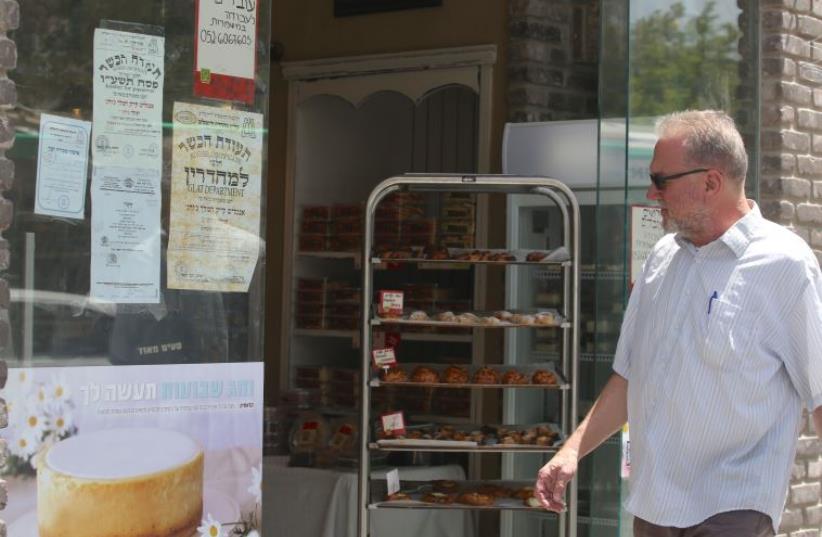 Kosher certificates
(photo credit: MARC ISRAEL SELLEM)
Advertisement
Phasing out a practice widely deemed cruel by both animal rights activists and rabbinical leaders, the government of Paraguay has agreed to implement more humane methods of kosher slaughter by the end of 2017.Paraguayan slaughterhouses, which produce about 40% of the beef consumed in Israel, will begin using “rotating pens” for slaughter – a practice seen as far less cruel than the “shackle-and-hoist” method currently in use. The decision to update the country’s kosher slaughter protocol follows an undercover investigation in November by Israeli and international animal rights activists and the subsequent intervention of the Israeli Agriculture Ministry’s Veterinary Services.“The authorities in Paraguay have announced that rotating pens will enter into use by the end of 2017,” a recent Veterinary Services document stated.The shackle-and-hoist method, which was denounced years ago by the Chief Rabbinate of Israel, positions the animal upside-down – a necessity in kosher slaughter – by chaining a hind leg and lifting the animal for slaughter. While the practice was eliminated in Israel, many South American facilities that export beef to the country still employ the method.In November, Channel 10 news aired the investigation, which was conducted with Israel’s Anonymous for Animal Rights and Let Animals Live and People for the Ethical Treatment of Animals in the US. The footage documented kosher slaughter in Frigochaco, a Paraguayan facility that markets meats to Neto Group, and Israeli importer.More than 80 animals are slaughtered each working hour at the Frigochaco facility, with approximately 200,000 slaughtered there last year for both kosher and non-kosher markets, the report said. In addition to employing the shackle-and-hoist method, the workers were documented using restraint tools like pronged “devil’s forks” and metal hooks that attach to the animals’ nostrils.The Chief Rabbinate of Israel has spoken out against the shackle-and-hoist practice since 2008, encouraging rotating pens in its place. Rotating pens are widely considered to be more humane, as they shift the cow upside-down in the pen enclosure, rather than with a chain around a hind leg.Shortly after the investigation aired, Anonymous for Animal Rights and Let Animals Live filed a petition with the High Court of Justice demanding that meat import licenses require foreign slaughterhouses to comply with Israeli law and World Organization for Animal Health standards and prohibit the use of shackle-and-hoist.“Immediately after the calves’ throats are cut, they are hoisted onto a conveyor belt, from which they hang by only one foot,” Yossi Wolfson, attorney for Let Animals Live wrote in the petition.“The calves stay conscious for a long time while they are hanging this way,” he continued.Wolfson went so far as to contend that slaughtering cows through their spinal cords did not cause loss of consciousness and that workers began processing the animals without ensuring that they were truly dead, a charge that those familiar with kosher slaughter strongly deny.In an official court response conveyed to The Jerusalem Post by Anonymous for Animal Rights, the Agriculture Ministry’s Veterinary Services said it had instructed the relevant South American countries to cease using the shackle-and-hoist practice by January 1, 2016.“The central issues posed by the petitioners – the lack of confirmation about the animals’ loss of consciousness and of sufficient wait time after slaughter, before continuing to treat the animal – these are clear defects,” the Veterinary Services response said.Although many of the countries continued the practice, regardless of the 2016 order, the response reported that Paraguay has now agreed to begin using rotating pens by the end of 2017. Veterinary Services received no such approvals from Argentina or Uruguay, however, the document said.Hannah Schien, associate director of undercover operations for PETA, described Paraguay’s decision as a “huge victory,” but stressed the organization’s insistence of refraining from eating meat entirely.“It’s an utter betrayal of Jewish law’s prohibitions against unnecessary suffering to use painful restraint methods and hack apart still-conscious, petrified cows,” she said.While Anonymous for Animal Rights and Let Animals Live also welcomed the forthcoming changes in Paraguay, the organizations stressed that this progress is only a small step in the global fight against animal cruelty.“The cessation of hoisting calves while they are conscious is a necessary step that is required by the minimum standards of the world,” a statement from the groups said. “But it is a drop in the sea compared to the torture that cows and calves undergo during the process of turning them from living creatures into pieces of meat.”