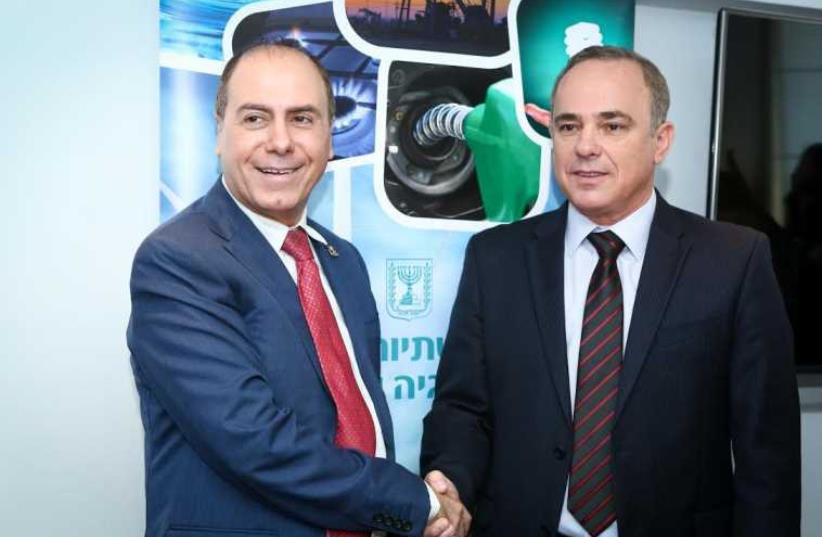 Yuval Steinitz (right) and Silvan Shalom
(photo credit: COURTESY NATIONAL INFRASTRUCTURES, ENERGY AND WATER MINISTERY)
Advertisement
As he assumed his role as National Infrastructure, Energy and Water Minister on Sunday, Yuval Steinitz pledged his commitment to advancing Israel’s natural gas sector, warning that the economic benefits of gas are contingent upon enabling the resource’s development.“We are here to encourage and develop the market, to preserve the balance between benefiting the country and its citizens and the investment of companies in exploration and development of the gas fields,” Steinitz said, at the minister exchange ceremony held in the Jerusalem office Sunday.Acknowledging that “there are many perspectives” circulating on the subject of natural gas in Israel, the new minister promised that he would strive to “do the right thing on behalf of the citizens.”Steinitz is assuming his role as energy minister during a period in which development of the large Leviathan gas reservoir has been all but frozen due to disputes between the government and the gas companies.Meanwhile, although Leviathan’s smaller Tamar neighbor has been flowing since March 2013, only one pipeline conveys this gas to Israel – without the redundancy necessary to ensure a secure gas sector.“I hope my tenure in the ministry will be characterized by additional natural gas discoveries, for the good of the State of Israel and for its economic benefit, as well as by connection to natural gas and the security of gas flow across the country,” Steinitz said.“We have economic and moral commitments to ensure that natural gas arrives to consumers,” he continued. “As the person who established the Sheshinski Committee, I would like to see great amounts of money arriving.”Steinitz was referring to the committee established under his tenure as finance minister, led by Prof.Eytan Sheshinski. The Sheshinski Committee determined that gas royalty rates would be a steady 12.5 percent, while profit levies on hydrocarbons would begin at 20%, with the ability to eventually rise to 60%. The committee’s recommendations received Knesset approval in March 2011.“If natural gas does not arrive to Israel, the money that is supposed to come thanks to the Sheshinski Law will neither reach the state coffers nor the capital fund that we established, and will not benefit the citizens of Israel,” Steinitz said.Israel’s natural gas future is still uncertain, as a result of a disagreement between the government and Delek Group and Noble Energy, the two companies that hold the majority stake in the gas currently discovered. The stalemate stems from Antitrust Authority Commissioner David Gilo’s December 23, 2014, declaration that he would review whether the dominance of Delek and Noble in the Mediterranean gas sector constitutes an illegal “restrictive arrangement.”Members of an interministerial team – from the Finance Ministry, the National Economic Council and the National Infrastructure, Energy and Water Ministry – aimed at solving the dispute said last Wednesday that the companies had agreed to a compromise outline presented to them the night before.The compromise requires that the Delek Group’s subsidiaries Delek Drilling and Avner Oil Exploration exit the Tamar reservoir entirely, selling its assets there within six years, according to government sources. However, Houston-based Noble Energy would only need to dilute its assets from its 36-percent share today to 25%, and could remain the basin’s operator.Both companies would be required to sell their holdings in two much smaller offshore reservoirs, Karish and Tanin. Unlike previous drafts of the compromise outline, this version revokes a mandate that all of Leviathan shareholders market their gas to the Israeli market separately.Other issues, such as gas pricing and increasing export flexibility, are still under discussion, government sources said last week.As Steinitz attempts to move forward with the development of the gas reservoirs in his new role as energy minister, the outgoing minister Silvan Shalom reminded him at the ceremony on Sunday that “it is not simple to introduce big companies into the natural gas sector in Israel, and our attempts up until now did not succeed.”While Shalom stressed his belief that the ministry has the ability to promote competition in all sectors under its authority, he emphasized that “competition is important, but not less so than bringing the gas itself to the state.”“Your primary goal should be the connection of an additional natural gas pipeline in order to bring natural gas to all of Israel, and to continue the development of the Leviathan reservoir,” Shalom told Steinitz.