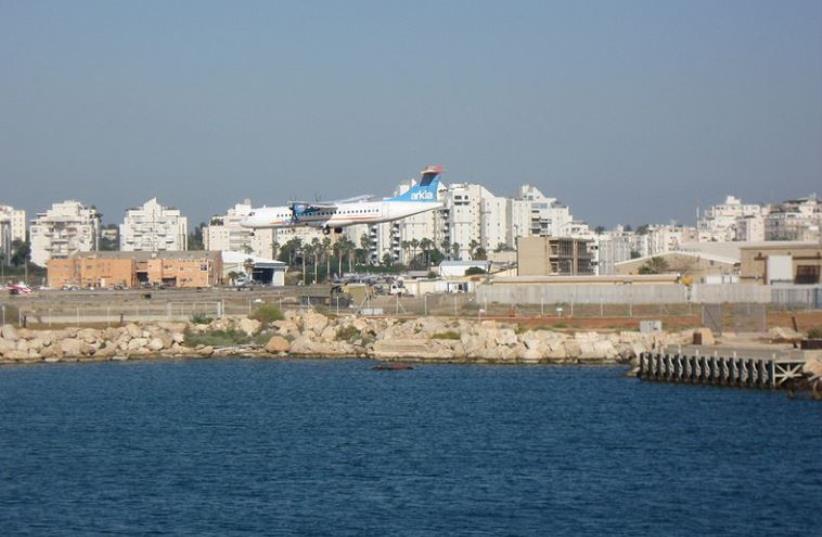 Sde Dov airport
(photo credit: ORI~/WIKIMEDIA COMMONS)
Advertisement
Plans to close Sde Dov Airport in Ramat Aviv in two years may be postponed because of concerns about the impact of the closure on the tourism-centered economy of Eilat, where many flights originating at Sde Dov land.The Knesset’s Internal Affairs and Environment Committee met Monday to discuss delaying the domestic airport’s closure from April 2017 to January 2019.The proposal would shut down the civilian airport at the same time the facility’s military section is slated to be closed. Eilat Mayor Meir Yitzhak Halevy said that he was requesting the later date, because “not even a shack is going to be built in the space while the military airbase is still active.” Halevy also requested that the Knesset discuss what the alternative to Sde Dov will be.During the proceeding, it was noted that in March 2015, the IDF agreed with the Finance Ministry to close its IAF airbase at Sde Dov by January 2019.Orit Payis, an official from the Prime Minister’s Office, favored closing the airport as originally planned in 2017 in order to expedite the seaside site’s redevelopment for housing.Noting that civil aviation from the airport is marginal, she said the 21 months are necessary for demolishing the existing structures and creating infrastructure.An official from the Tourism Ministry said that, “It is known that this relocation will cause serious damage to Eilat,” especially with regard to domestic tourism, and said that without a viable replacement, “it should be forbidden” to close the airport.Zionist Union MK Eitan Broshi said, however, that the plan gives away the country’s connection with the Galilee, Arava and Eilat. “Something has gone wrong in this country that real estate has become more important than the Negev and Galilee,” he said. Broshi claimed that the average traveler may stop going to Eilat altogether.Broshi said that Tel Aviv Mayor Ron Huldai is in favor of leaving the airport in place.The agreement to close Sde Dov Airport and have domestic flights leave from Ben-Gurion Airport in Lod was approved in 2013. At the time, finance minister Yair Lapid welcomed the decision, saying it would allow thousands of apartments to be built, helping to lower housing prices.The airport, which is the base for Arkia Israel Airlines and Israir Airlines, currently provides domestic flights to Eilat, Haifa and Rosh Pina. But national transportation infrastructure projects, including the opening of a train station at Ben-Gurion Airport in 2004 that slashed the commuting time to Tel Aviv’s University, Central, Shalom and Hagana stations, have made Sde Dov redundant. In 2017 the Eilat/ Ilan and Assaf Ramon International Airport at Timna will replace the small airport in central Eilat. As well, a highspeed railroad is planned to link Beersheba and Eilat, with a stop at the new airport.Sde Dov had 735,887 passengers in 2012, down from 879,922 in 2001.