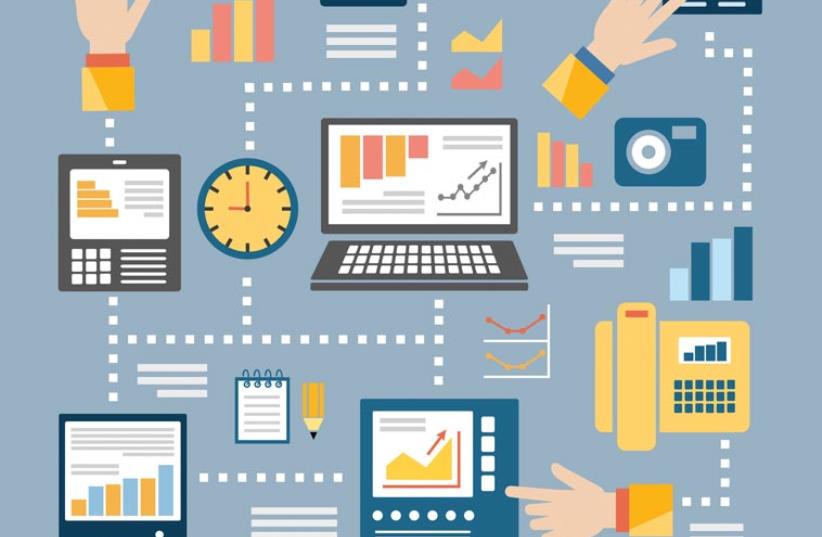 Youth and Hi-tech in Israel
(photo credit: ING IMAGE/ASAP)
Advertisement
Israel's 'high-tech revolution' is in trouble as R&D investment flat-line and a shortage of high-skilled workers grows, according to a report released Sunday by the Finance Ministry.According to the report, I0srael's high-tech sector grew at a rate of 9% a year, twice as fast as the economy, from 1998-2012, but has only grown half as quickly as overall GDP since 201. Its share of exports, which gew from 15% in 2001 to over 35% last year has leveled off. Investment in research and development, which grew at 6% from 1991 to 2012, has dropped off, with South Korea taking the lead in R&D investment in the OECD.The rise of high-tech in Israel, the report noted, has made it a crucial part the economy. In 2014, the high-tech sector accounted for 12% of private sector workers--some 283,000--and 9% of GDP.Though Venture Capital investment has reached its pre-dot-com-bust levels (as it has in the United States, though not in Europe), Israel's high-tech sector faces a shortage of skilled labor."The most significant challenge facing the sectors is the supply of skilled labor," the report noted.In the 1990s Israel saw a massive uptick in skilled high-tech workers, in part because of the influx of educated immigrants from the former Soviet Union.But no such influx is headed toward Israel today, and the country is not growing its own high-skilled workers quickly enough. The share of students studying science has fallen from a peak of 13% in 2005 to 9% in 2014. Where Israel used to be several percentage points ahead of the OECD average on that measure, the gap has completely closed as fewer Israelis study science.The fact that high-skilled workers are absent, the report said, helps explain the consistent rise in high-tech salaries, which have inched closer and closer to US high-tech wages (though the gap is still significant; Israel's high-tech salaries remained between 65-80% of US high-tech salaries in various fields in 2014).The report issued a siren of sorts to Israel's political leaders, which it said did not have a robust plan for addressing the issue."The shortage in labor trained for the high-tech sector is not expected to be resolved in the absence of comprehensive policy," it noted.