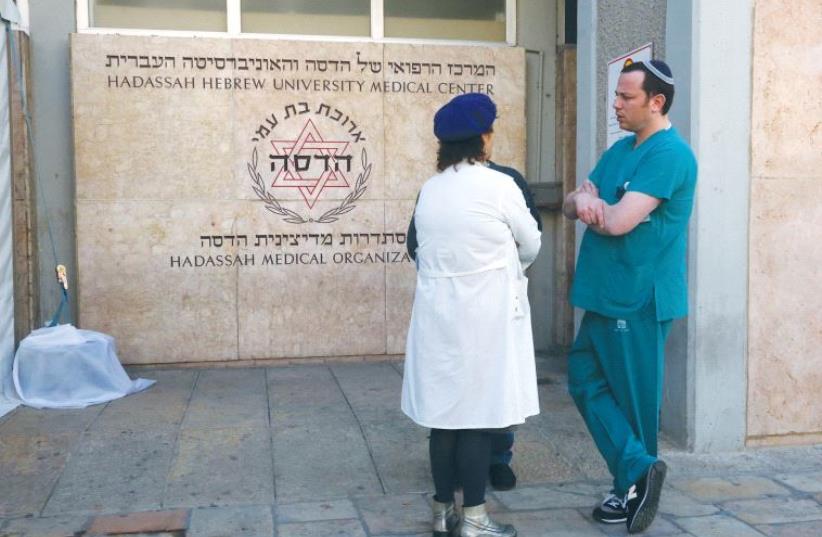 STAFF TAKE a breather outside Hadassah-University Medical Center in the capital’s Ein Kerem.
(photo credit: MARC ISRAEL SELLEM/THE JERUSALEM POST)
Advertisement
Two men in their 20s were arrested in Jerusalem on Thursday, on suspicion that they received cash payments in return for advancing the treatment for paying patients at Hadassah-University Medical Center in Ein Kerem. The police investigation is also looking into the involvement of doctors in the affair.One of the arrested men, Netanel Jacob, is a known figure in the haredi community. Both men are from the haredi town of Betar Illit.Three doctors were questioned under caution by the fraud squad in Jerusalem. Two of them said they knew nothing about the suspects, a claim that is inconsistent with the findings by investigators. The third doctor did admit he had met with the suspects, however he denied that there had been illegal activity involved. All three doctors denied receiving money in any form.Asked to comment, the Hadassah Medical Organization spokeswoman said that “upon taking office [in February], HMO director-general Prof. Zeev Rotstein took upon himself a mission to make the medical centers public hospitals that are open to all, where there is no private medical services during regular hours... Everyone who comes to the hospital receives the highest-quality, courteous and the fastest service without opening their wallets and/or filling envelopes.”He added that for the past several months, the Israel Police has been conducting an undercover investigation in cooperation with the Hadassah Medical Organization. The investigation began after a complaint reached the hospital and was transferred to the police, who suspected that some physicians had received illicit payments in return for speeding up their medical care. Rotstein was interviewed by the media on the subject a few months ago when he said he was battling against such an unacceptable phenomenon.The undercover investigation became open, with an announcement by the Israel Police. A “go-between” and his assistant were arrested and senior doctors were investigated for alleged involvement in making payments through a network of go-betweens that allegedly operated in the hospital, the spokeswoman said.“Now Hadassah stands together as one behind the director-general, determined to eradicate all evil and not to allow any outsider or insider corrupt the staff. The news is the beginning of the end of the process, and the ‘all-clear’ sound that will be heard at the end of the investigation will symbolize the fact that Hadassah is clear of these phenomena.”Jerusalem Post staff contributed to this report.
Sign up for the Health & Wellness newsletter >>