Sixty-seven entrants who created 49 projects are competing for prizes, including the chance to represent Israel in the Intel-ISEF competition later this year. 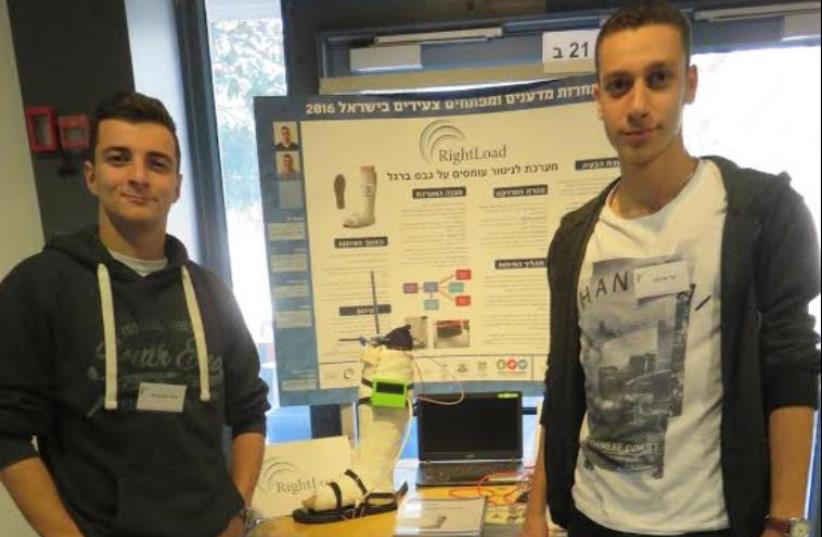 Shahar Ein-Kedem (left) and Bar Arama of Kiryat Tivon show project on device to sleep up healing of fractured legs in cast.
(photo credit: JUDY SIEGEL-ITZKOVICH)
Advertisement
A glove to help the blind maneuver without a seeing-eye dog; a stethoscope-like device that can cheaply detect water leaks; a computerized device to shorten the healing of leg fractures; a wheeled trolley that helps the elderly pull it upstairs with little effort and cheap, small plastic cones to help Third World poor to hear better are just some of the prototypes developed by smart teens for the Intel-Israel Young Scientist Competition.Sixty-seven entrants who created 49 projects are competing for prizes, including the chance to represent Israel in the Intel-ISEF competition later this year, explained their work to judges on Monday at Jerusalem’s Bloomfield Science Museum. The finalists were selected from among 210 projects in high schools around the country.The winners will be declared on Tuesday afternoon at a special ceremony in the Knesset. The event annually marks Israel Science Day, held every year to mark the anniversary of the birth of Albert Einstein. It is the 19th year that the Israeli competition is being held among high school pupils, and every year, the scientific level rises and the competition gets more challenging.Of those competing for honors are 42 boys and 25 girls and three Arabs. The  chairman of the judges panel is again Prof. Hanoch Gutfreund, former president of the Hebrew University and one of the world’s experts on Einstein, while Emeritus Prof. Gad Glaser, a leading biochemist, is head of the academic committee.While numerous projects involved practical inventions that might be adopted by industry in the future, others were more theoretical and more socially and historically oriented such as life in the divided city of Berlin between 1945 and 1963; the influence of Julius Caesar on the fall of the Roman Republic; and feminism in Orthodox Jewish society compared to secular Jewish society.