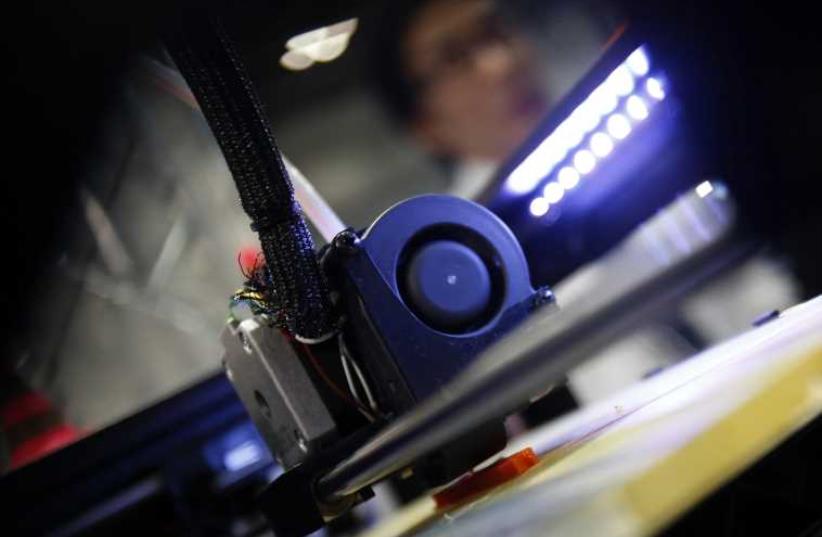 3D printer at work (stock)
(photo credit: REUTERS)
Advertisement
Hackers can introduce faults in sensitive products such as drones that are produce by 3D printers, according to an expose by researchers from Ben-Gurion University of the Negev, South Alabama University and Singapore University of Technology and Design.As 3D printing is expected to produce a huge amount of products in the future, security risks due to hackers could be a major threat, according to the team, which warned that “bugs” produced in the computer could cause them to crash or otherwise be destroyed.The team produced a YouTube video in which they destroyed a $1,000 drone by breaking into a computer, identifying the drafting file of the drone and introducing defects that cannot be detected by a visual examination. During flight tests, the defective propeller broke when the drone ascended. As a result, it crashed to the ground and was destroyed.It was only a $1,000 loss, the researchers said, but such cyber attacks can cause much greater damage. According to Wohler’s Report, an annual survey of 3D technology, last year the industry was worth $5.165 billion.In addition, 32.3% of all objects produced by the technology serve as functional parts. The number of industries in the world that already use 3D printing total 117, including the production of aviation engines and defense industries.“Let us increase the scale of the problem” said BGU Prof. Yuval Elovici of the department of engineering information systems, who is also director of BGU’s Deutsche Telecom labs and a leading expert in computer security.“Think about the possibility that the enemy can harm functional parts in a jet engine. Such an attack can cost human lives, great economic damage and disrupt the industries’ use of 3D printing and national security.”Elovici noted that the surge of 3D printing will attract the attention of terrorists and other enemies, including criminal elements, to push their causes or geopolitical power.Their work, called “dr0wned,” was not the first to raise the problem, but all previous studies dealt with only one aspect of a possible attack and supposed that all other components of the attack were executable.The BGU-Alabama-Singapore study left no place for doubts and supplies a scientific basis for this. Combined with permeability and the importance of three-dimensional printing, their study highlights the need to tackle an additional battlefield in the war for security and the importance of securing 3D printing.