Bonfires should never been lit without a responsible adult supervising. 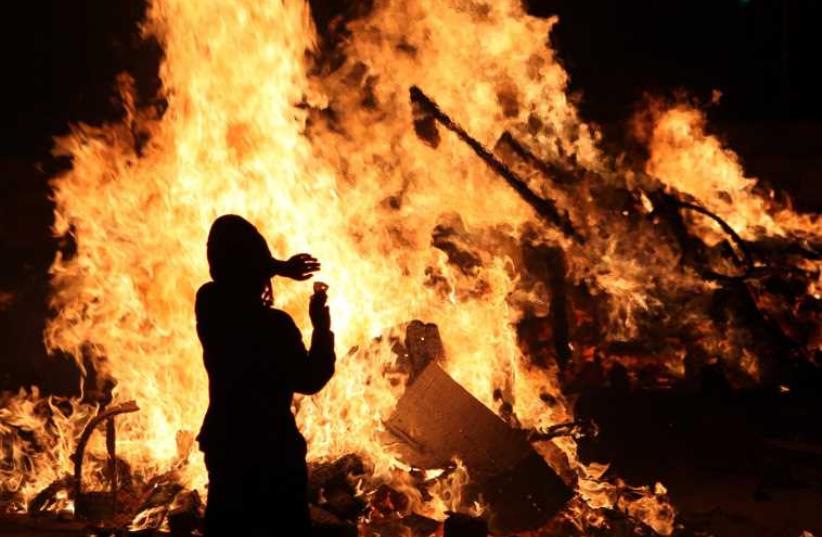 A bonfire seen on Lag Ba'omer
(photo credit: MARC ISRAEL SELLEM/THE JERUSALEM POST)
Advertisement
Thousands of bonfires due to be lit on Wednesday night around the country will not only bring air pollution but also endanger children whose Lag Ba’omer activities are unsupervised.Lag Ba’omer, the 33rd day of the Omer, which is counted between Passover and Shavuot, is also the anniversary of the death of Torah sage Rabbi Shimon Bar-Yohai, who lived in the period immediately following the destruction of the Second Temple (70 CE). According to Jewish custom, large bonfires are lit in memory of Bar-Yohai, who, according to the Zohar, was bathed in intense light the day he died.The Meron tomb of Bar-Yohai is always crowded on Lag Ba’omer, smoky and with poor sanitary conditions. Ziv Medical Center in Safed is on special alert because it is the hospital closest to the tomb.In 1911, according to Ziv officials, a total of nine celebrants died at Meron and dozens of people were injured when a fence on a roof at the tomb collapsed. This led to the donation of money to build the Safed hospital.The day also marks the halting of a plague that raged among the disciples of another Torah sage, Rabbi Akiva, who “did not act respectfully toward one another.Magen David Adom, United Hatzalah, the Israel Police and Fire and Rescue Services will be on high alert to prevent disruptions of public safety and treat the injured who need care from paramedics and medics.MDA and Schneider Children’s Medical Center in Petah Tikva warn against the dangers of collecting planks, especially those with visible nails.A bonfire should never be lit without a responsible adult supervising it. Wear high protective shoes or boots. Situate bonfires only in areas cleared of leaves, grass and thorns and far from electricity and telephone wires, trees, bushes and permanent structures. Do not put the planks in a vertical position, as when burning they can fall on campers and cause injuries. Surround the bonfires with stones as a border to prevent them from spreading.Do not go into areas with tall grasses and rocks, as snakes awakening from the winter may attack. Do not enter construction sites to take building materials.Do not throw aerosol or carbonated drink cans, firecrackers or lighter fluid into the fire. Always douse the fire with plenty of water or cover it with earth or sand. Do not sleep in sleeping bags near the fire. Always have a first-aid kit with you and a cellphone to alert the authorities if something goes wrong. Call MDA at 101 if someone is injured.If someone is caught in fire, prevent him from running; instead, roll him on the bare ground or cover him (but not his face) in a wet blanket. Do not rip his clothing from the skin or apply ointments. If sparks enter the eye, wash it with a lot of clean water.Make sure broiled vegetables are not more than warm when eaten.