Experts provide some do’s and don’ts of starting school

The state Institute for Safety and Hygiene urges parents whose children go on foot to a new school to make a “dry run” with them before classes begin so they learn the safest way to get there. 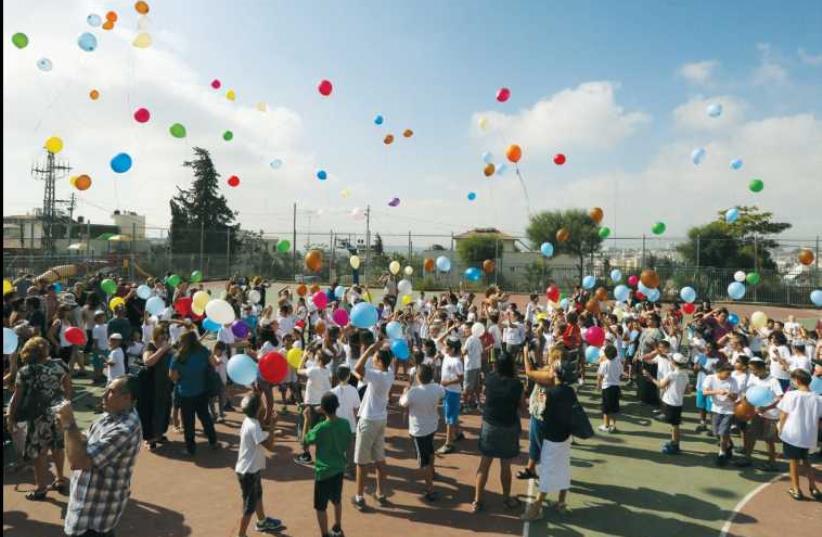 Children on the first day of school in Jerusalem, 2014.
(photo credit: MARC ISRAEL SELLEM/THE JERUSALEM POST)
Advertisement
With the opening of the school year a week away, safety authorities are advising parents how to avoid harm to children on the way to and from school, in classes, and after returning home.The state Institute for Safety and Hygiene urges parents whose children go on foot to a new school to make a “dry run” with them before classes begin so they learn the safest way to get there.Children who are driven to school must be left off only in areas set aside for alighting from vehicles. Children must be taught rules of safety, especially when crossing streets, and they should not cross alone when they’re younger than nine years old. If they are taken by bus or other mass transport, make sure that they know how to get on and off the bus safely.Electric bicycles are becoming more and more common, but they can be very dangerous.Children under the age of 14 may not legally use them; even above that age, they must be taught how to ride, not to exceed the permitted speed, to ride only on sidewalks, to always wear a helmet, and show consideration for pedestrians.Schoolbags should be ergonomically designed to be not too heavy for the child’s weight (less than 15 percent of the child’s weight) and not too long (never more than 10 centimeters under the waist). The straps should be cushioned so they don’t cut into the shoulders.Many accidents, said the institute, occur during recess.Teach children not to run on the staircases and not to get too close to windows or slam doors that could trap young fingers.Doctors at Petah Tikva’s Schneider Children’s Hospital said that during the last week before school starts, youngsters should gradually go to sleep earlier and abandon the sleep schedule they followed during the summer vacation.Hila Argentrau, head of the learning disabilities center in the medical psychology department of the hospital, said it is important to help the child get a feeling of belonging in school, because this predicts how well the youngster will cope well with his studies and social ties. Pay attention to the child’s mood when he or she returns from school and what experiences they talk about.If these are negative, make contact with the teacher or counselor to discuss ways to improve the situation. Early intervention can reduce problems later, she said.Prof. Yehezkel Weissman, head of Schneider’s emergency department, advises parents to make sure children have enough water and sun protection during the remaining hot months.Dafna Ziv Bosani, a dietitian in the nutrition unit at the hospital, recommends that children always eat breakfast before doing to school. Prepare a chart at the beginning of the week and mark down nutritious and popular sandwiches that the child wants to take to school. Include vegetables and fruits rather than chocolate spread.Although children today seem to prefer playing with their electronic devices, sign them up for sports clubs and other ways of getting them to move about and exercise.Dr. Elida Magor, pediatric and adolescent psychiatrist at Meuhedet Health Services, said that if a child refuses to go to kindergarten or to school due to a lack of self-confidence, having been ridiculed, being unpopular and lonely, this can usually be resolved quickly by talking to the child and the teacher.