The two organizations have been working hand in hand to save lives for the past 10 years since UH’s founding, shortly after the Second Lebanon War. 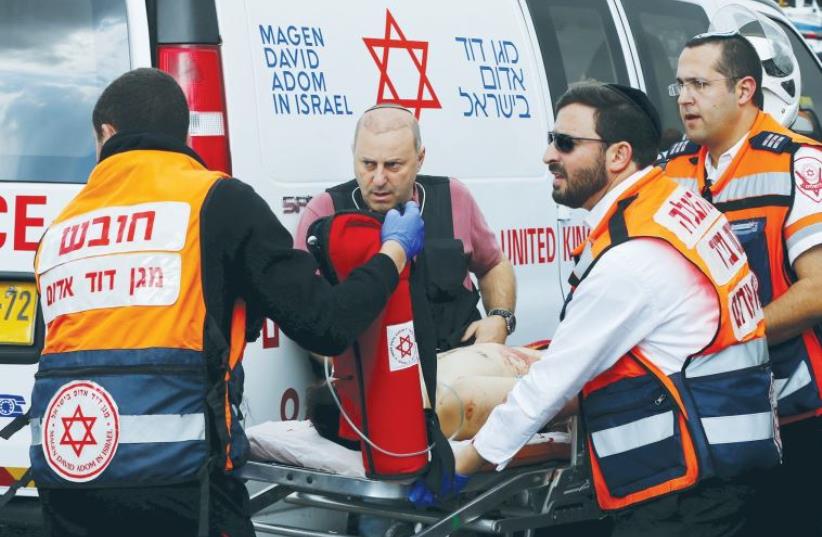 MDA MEDICS evacuate a Palestinian attacker in Jerusalem after a stabbing in October
(photo credit: REUTERS)
Advertisement
Health Minister Ya’acov Litzman last week initiated a reconciliation meeting between national ambulance service Magen David Adom director- general Eli Bin and heads of the immediate-response organization United Hatzalah to discuss how to establish better cooperation and smoother transitions of patients between the two groups.UH founder Eli Beer, director Ze’ev Kashash, CEO Moshe Teitelbaum and more than 50 heads of the organization’s branches from around the country met with Litzman and MDA officials in Modi’in.According to Litzman’s draft agreement, both organizations will receive access to all of the emergency calls that go out throughout the country. In the coming days, teams from both organizations together with ministry representatives will hammer out the remaining details of the agreement and its application in the hopes increased cooperation will save lives.The draft agreement states that the emergency response groups will continue working together as separate and independent entities. Beer said UH “fully supports the tremendous efforts put forth by the minister to help smooth the process of saving lives in Israel” and that “UH is fully committed to implementing the plans being created by the ministry.”The ministry spokeswoman said that it regards the activities of first responders as very important even before MDA ambulances arrive. “This activity is promoted by the ministry as part of a national program that we have launched to boost the availability of lifesaving medical response.”She added that according to the draft formulated by the ministry, when there are emergencies requiring immediate medical responses, MDA informs medics whose location is detected by the computerized tracking system, regardless of their organizational affiliation.As a result of the meeting in Modi’in, it was agreed that tightening cooperation would “do holy work for the good of patients and wounded who need help,” the ministry said.The two organizations have been working hand in hand to save lives for the past 10 years since UH’s founding, shortly after the Second Lebanon War.Due to the prolific use of ambucycles (medically equipped motorcycles) and their wide range of community volunteer medics, Beer said his organization often arrives at the scene of the emergency in less than three minutes.The trained volunteers begin working to stabilize and treat the patients, then hand them over to MDA ambulances once they arrive.“Minister Litzman is guaranteeing the agreement between the two organizations that, in turn, will benefit all of the citizens across the country,” said Beer.“We are recognized as the national first-response organization of Israel, and working together with the national ambulance service... give me great satisfaction. To see both organizations working together to save lives is simply gratifying,” said Beer, adding that each organization and the roles that they play are important in helping people receive the quickest and most professional medical care that they can.“Each [group] has an important role. United Hatzalah with our volunteers and ambucycles, and Magen David Adom with its expertise and preparedness – all are necessary and should be utilized to the fullest capacity in order to save the lives of people living in Israel.”