The stickers, to be designed by the State Advertising Authority, will be distributed at well-baby centers, health fund clinics, petrol stations and elsewhere to all vehicle owners around the country. 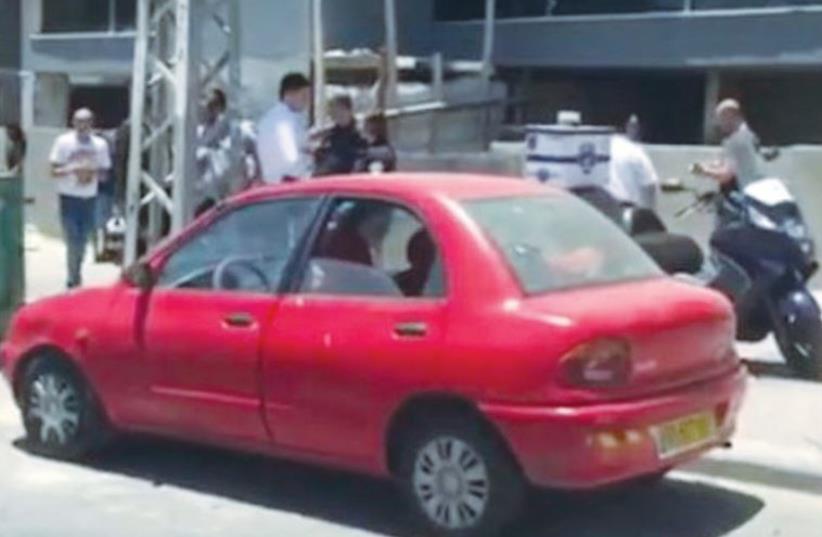 THE VEHICLE in Ashdod where a baby died of heat stroke after being left for hours in the sun.
(photo credit: screenshot)
Advertisement
Realizing that a state-approved technological solution to prevent adults from leaving young children in hot vehicles could be years away, the Health Ministry has decided to adopt a simple, inexpensive idea suggested by The Jerusalem Post eight years ago.It will print hundreds of thousands of stickers to be affixed to the inside of all vehicle doors below the window urging drivers not to leave young children unattended inside even for a moment.Health Ministry official Miri Cohen announced this on Monday at a meeting of the Knesset’s Committee for Children’s Rights, chaired by MK Yifat Shasha-Biton.The sticker idea, suggested to then-deputy health minister Ya’acov Litzman in 2009 by the Post’s health and science editor but rejected by him, will be implemented by the ministry in a few weeks.Some 500,000 stickers in numerous languages, including Arabic and Yiddish in addition to Hebrew, English, Russian, Amharic, French and Spanish, were originally printed by United Hatzalah founder and president Eli Beer when he heard of the Post’s idea, and they were distributed around the country to drivers and to UH supporters in Florida and California, where leaving children in hot cars is also a problem.The original idea was to leave a space for drivers to attach photos of their children or grandchildren that they would see every time they entered or exited the car.The stickers, to be designed by the State Advertising Authority, will be distributed at well-baby centers, health fund clinics, petrol stations and elsewhere to all vehicle owners around the country.It will also be accompanied by a radio campaign.The Post’s idea was also meant to include the requirement that without the sticker, no driver would be able to renew his or her vehicle license. This has not yet been considered by the Transport Ministry.Dozens of babies and toddlers have since died in hot cars after being left by adults.Only last week, a year-old baby girl from Avnei Hefetz in Samaria was forgotten by her mother – a hospital nurse – a few blocks from her nursery school. The baby, left in massive heat for six hours, died within a short time, but her mother remembered the baby was there six hours later.A Transportation Ministry representative told the committee that it was “not ripe to require vehicle owners to purchase a technological device to prevent children from being left in vehicles.It would involve testing of devices and approval by the Israel Standards Institute.“How many more children have to die before the ministry will be ripe?” shouted Shasha-Biton.The kindergarten teachers department in the Israel Teachers Association told the committee it refuses to ask its members to volunteer to call parents whose children do not reach the premises on time.The grounds for refusal were that they are too busy with other responsibilities.“You put too much responsibility on us,” said a representative.“The first responsibility is with the parents.”But many babies forgotten in cars do not attend such institutions, and grandparents and ultra-Orthodox parents do not have smartphones that have helpful applications.A United Hatzalah representative said that last year, there were 270 incidents in which young children were forgotten in vehicles and faced danger; seven of them died. The Knesset committee has already had 10 sessions to discuss the problem in the last two-and-a-half years.
Sign up for the Health & Wellness newsletter >>