The parents said they would enter the mediation as requested by the court so as not to stand in contempt of court and out of hope that their children suffering would quickly be cared for. 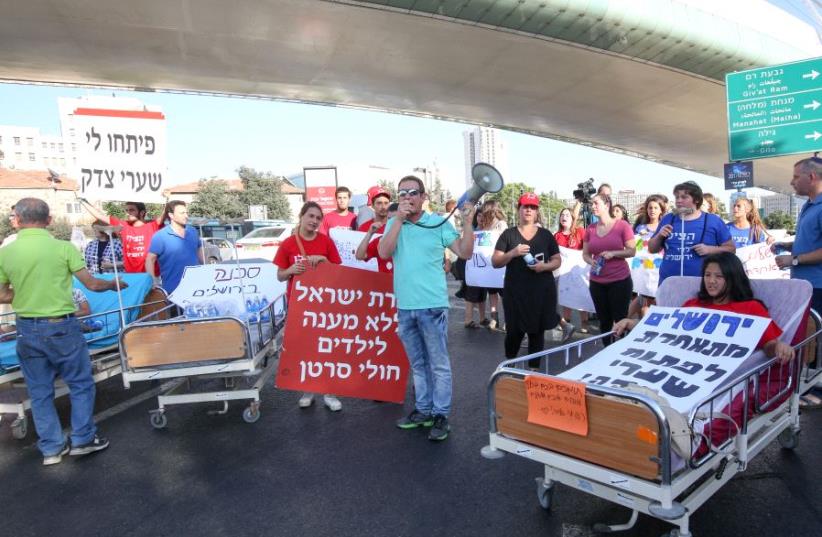 Hadassah Hospital demonstation
(photo credit: MARC ISRAEL SELLEM/THE JERUSALEM POST)
Advertisement
The High Court of Justice on Tuesday sent to mediation the two bitter sides in the dispute over Hadassah Medical Organization’s pediatric hemato-oncology department.Prof. Elyakim Rubinstein, who just retired as a Supreme Court justice and who has a reputation as an elegant solver of difficult disputes, was named to be the unpaid mediator starting on Wednesday morning.The High Court, represented by three justices – Yoram Danziger, Noam Solberg and Uzi Fogelman – said that it would keep its “finger on the pulse” of the mediation process.Rubinstein will issue his first report on any progress in the dispute by Thursday morning.The suit was filed against Health Minister Ya’acov Litzman, the HMO and others by parents of dozens of Israeli children. Some of those parents called for a hunger strike on Monday on behalf of the medical staff, despite that staff’s opposition to such an action.The children had been treated at the Hadassah department until June 4. On that date, six senior oncologists and three medical residents in the department resigned. Over the last seven months, the doctors have claimed that they cannot work with HMO director- general Prof. Zeev Rotstein due to his “objectionable policies and personal behavior.”One of those policies was uniting the pediatric and adult hemato-oncology departments. Another was, they charged, giving priority to medical- tourism patients who paid HMO NIS 500,000 for bone-marrow transplants and follow-up for hundreds of children in recent years.What will surely be taught in medical- administration faculties as the most mismanaged, life-and-death struggle in Israel’s health system – involving ego, spin and money – has not yet ended.The parents, who have almost unanimously backed the resigning doctors, organized yet another protest demonstration on Tuesday evening. It began in their protest tent in Jerusalem’s Sacher Park and moved toward the Strings Bridge at the entrance to the capital, where it caused serious traffic jams.The parents said they would enter the mediation as requested by the court so as not to stand in contempt of court and out of hope that their children suffering from various blood cancers would quickly be well cared for. But they continue to insist that Health Minister Ya’acov Litzman – who since January has refused to authorize Shaare Zedek Medical Center to open a competing department and has ordered government hospitals not to hire the resigning oncologists – must be forced to give permission for a new department in Jerusalem.Meanwhile, many of the 12 people who are on a hunger strike are continuing their action.Litzman issued a “heartfelt request” to the parents, asking them to “put everything behind us and give a real chance to mediation for the good of the children.We are approaching the process with sincerity.”Asked to comment, Shaare Zedek Medical Center director Prof. Jonathan Halevy told The Jerusalem Post that it was not a case of “a side in this dispute. After all that has happened and an effective pediatric hemato-oncology department is not restored at Hadassah, there is room for giving Shaare Zedek a license to open one, for the good of the children.”Yaakov Izak, the personal adviser and spokesman to Litzman, denied a frontpage report in Haaretz claiming that the Hadassah Women’s Zionist Organization of America tried to fire Rotstein five months ago. Izak said “we are not aware of such a request by HWAOA, and it is not an issue.”The Zionist organization owns the medical centers but has minority status on the HMO board because so much state money was given to prevent it from financial collapse.The HMO spokeswoman also maintained that there was no such effort to dismiss Rotstein. The HWZOA in New York said: “The most important thing for all of us is the welfare of the sick children. We support Prof. Rotstein, who together with the Health Ministry and the HMO board of directors are working around the clock to find a solution that will allow the children to receive the best medical care.”
Sign up for the Health & Wellness newsletter >>