The schizophrenia risk of the immigrants is twice as high as those of Israeli-born Ethiopian Jews. 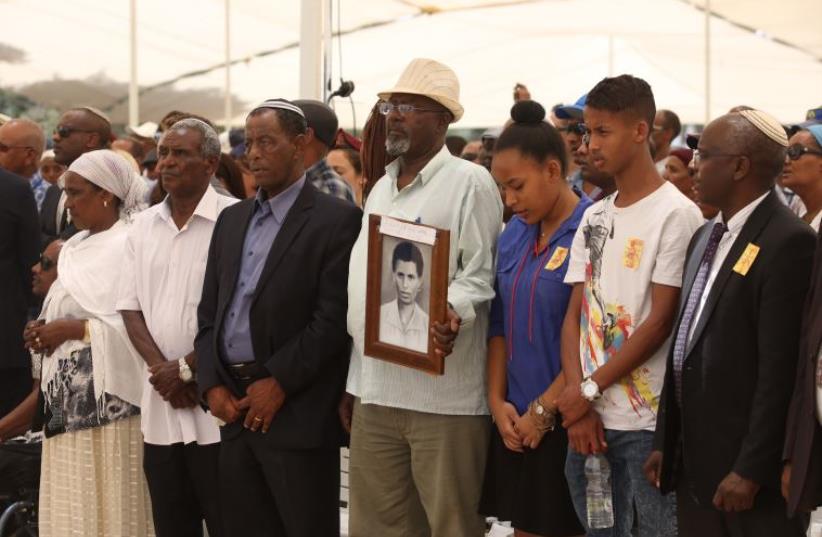 A memorial ceremony for Jewish immigrants who died on the way to Israel from Ethiopia, June 5, 2016‏
(photo credit: MARC ISRAEL SELLEM)
Advertisement
Immigrants of Ethiopian origin have a 2.4-fold risk of developing type-2 diabetes and a 1.5 higher risk of contracting schizophrenia than other Israelis, according to a recent discussion in the Knesset Labor, Social Welfare and Health Committee.Dr. Yonatan Reuven, who conducts research on Ethiopian Jewish health, said that due to lifestyle and nutrition changes, the diabetes risk is significantly higher even than Jews of Ethiopian origin who were born in Israel. The condition is often accompanied by hypertension, obesity and tooth decay.The schizophrenia risk of the immigrants is twice as high as those of Israeli-born Ethiopian Jews. Although no explanation for this was given, 28% of the immigrants suffered from post-traumatic stress disorder, and the men were significantly more likely to commit suicide.A month ago, changes in regulations instituted by the Health Ministry went into effect, allowing some Ethiopian immigrants, homosexuals and elderly people to donate blood. The change resulted from new Israeli and foreign epidemiological data and the improvement in medical technologies and risk assessment.For many years, Jews of Ethiopian heritage who were born in Israel have been able to donate blood without limitation.However, those who were born in Ethiopia or if they spent over a year, since 1977, in a country where HIV was endemic, had been banned. It was also forbidden for people of any origin over the age of 65 to give a first blood donation.Thanks to the new changes, restrictions on Ethiopian immigrants who were born there were dropped, except those who spent more than a year in an HIV-endemic country and less than a year has passed since they arrived in Israel.The questionnaire – filled out by all would-be donors about possible behaviors that could increase the risk of HIV infection such as homosexuality or intravenous drug use – has been updated and is identical to those adopted by the US Food and Drug Administration and health authorities in Europe. The tests used here for HIV, hepatitis B and hepatitis C virus are significantly more sensitive than the old ones, thus the “window” of infection is being narrowed to a few days between infection by a carrier and testing for these viruses.

YALURONIC ACID IN CREAM, NOT INJECTION A Bar-Ilan University research team has developed a unique technology that produces small molecules of anti-aging hyaluronic acid polymers that can be applied as a cream instead of injections. The team, headed by Prof. Rachel Lubart and Prof. Aharon Gedanken from the chemistry and physics departments and BIU’s Institute for Nanotechnology and Advanced Materials, have been involved in the past few years in the development of a technology for micronization and characterization of hyaluronic acid.The skin, which plays an important role in protecting the body’s organs, is impenetrable.Finding means to penetrate the skin barrier has challenged the medical field for years. Huge efforts have been made in developing ways to introduce hyaluronic acid into the skin, as it cannot penetrate it naturally.Now, based on this development, para-medical cosmetics pioneer Hava Zingboim has produced the first formula that allows the hyaluronic acid to penetrate into the deeper skin layers by means of cream application and without injection.A key property of hyaluronic acid, which is naturally present in the body, is its ability to adsorb large quantities of water. Hyaluronic acid is also an effective antioxidant, which means it can trap the free radicals formed in the skin during inflammatory processes or as a result of exposure to UV rays. These properties make it an important anti-aging agent.The look of young skin can be measured by the amount of hyaluronic acid between the cells. As people age, the body gradually loses its ability to produce hyaluronic acid.The decreasing availability of hyaluronic acid directly results in sagging skin, wrinkles and fine lines.CAN OMEGA-3 HELP PREVENT ALZHEIMER’S DISEASE?Neuroimaging shows increased blood flow in regions of the brain associated with memory and learning for people with higher omega-3 levels.According to a new study headed by Dr. Daniel Amen of Costa Mesa, California, published in the Journal of Alzheimer’s Disease, blood flow in specific areas of the brain rises in patients with high omega-3 levels. The incidence of Alzheimer’s disease (AD) is expected to triple in the coming decades, and no cure has been found.Recently, interest in dietary approaches for prevention of cognitive decline has increased. In particular, the omega-3 fatty acids have shown anti-amyloid, anti-tau and anti-inflammatory actions in the brains of animals.“This study is a major advance in demonstrating the value of nutritional intervention for brain health by using the latest brain imaging,” commented biology Prof. George Perry of the University of Texas at San Antonio and editor-in-chief of the journal.When single photon emission computed tomography (SPECT) is used to measure blood perfusion in the brain, images acquired from subjects performing various cognitive tasks show higher blood flow in specific brain regions. When these images were compared to the Omega-3 Index – a measure of the blood concentration of two omega-3 fatty acids called eicosapentaenoic acid (EPA) and docosahexaenoic acid (DHA) – investigators found a statistically significant correlation between higher blood flow and higher Omega-3 Index.Co-author Dr. William Harris of the University of South Dakota School of Medicine said, “Although we have considerable evidence that omega-3 levels are associated with better cardiovascular health, the role of the ‘fish oil’ fatty acids in mental health and brain physiology is just beginning to be explored. This study opens the door to the possibility that relatively simple dietary changes could favorably impact cognitive function.”