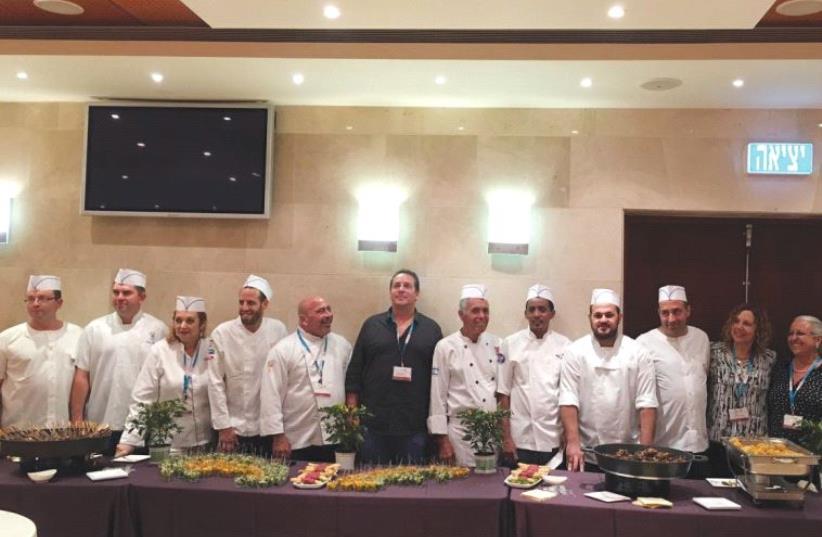 MEDICAL CENTER food service staff attend the forum in Haifa on Monday.
(photo credit: NETANEL IZAK/RAMBAM MEDICAL CENTER)
Advertisement
Heads of food services in the country’s medical centers – general, geriatric, psychiatric and rehabilitation – said this week that they are determined to improve the nutrition they give their parents but need increased funding to carry out their plans.They met in a forum at Haifa’s Rambam Medical Center on Monday for the fourth year in a row to discuss the fact that in many hospitals, the nutritional level of food served is too low and what can be done about it.Rambam provides only canola oil for baking and cooking, and olive oil for salads, no margarine, and whole-grain rolls in the morning. But as whole-grain bread costs twice as much, the hospital cannot afford to provide it at all meals, said Batya Berneman, head of the medical center’s food services.In an interview with The Jerusalem Post on Tuesday, Berneman – a former head of food services at Kibbutz Megiddo who studied hotel food services and has been in charge of food services at Rambam for 12 years – said her colleagues were all highly motivated.Not present at the meeting was the head of food services at the small Nazareth Hospital, where its director-general Dr. Bishara Bisharat decided several years ago to provide all patients and staffers with wholewheat bread, even though the hospital had to subsidize it.Berneman demanded that the government remove the subsidy and low-price controls from white bread and instead subsidize and lower the price of whole-grain bread, which is much more healthful. After a few weeks of complaints, the patients, staff and visitors to cafeterias got used to it and praised Bisharat’s decision.Berneman said that whole grains – including rice and couscous – was a subject discussed at the forum. From January, she added, all of Rambam’s vending machines will be emptied of cola, other sweetened drinks and junk food and replaced with water and other healthful drinks.Health Minister Ya’acov Litzman has recognized the forum of hospital food service heads and promised to help them in implementing their policies. “We want to change the image of hospital food. It must be healthful.”The hospitals also receive no state help in paying for non-gluten foods that must be provided to celiac patients and cost many times more ordinary carbohydrates. Sometimes, 3% of patients at Rambam – which prepared over a million meals in the past year – suffer from celiac disease and thus require special food, said Berneman. “But we have to give patients what they need and deserve. We have to be budgeted for this. We must be given the tools to make hospital food better.”Ofer Levy, who supervises food purchases at the Health Ministry, has been very helpful, she said.Rambam and other hospitals also want to reduce the amount of sugar and salt in hospital food, she said. “At Rambam, we already use Unmamix, which cuts salt by 70%, but it gives food a color, so we can’t use it for everything. Cheese that is served has no more fat than 5%. We prepare schnitzel for patients from chicken breasts, and don’t heat them up from packages. We will become members of the Rambam tenders board so we can influence food purchases at the hospital,” Berneman added.Many state hospitals have outdated, worn machinery to process food from scratch to avoid serving industrialized food to patients and staffers. She noted that Rambam director-general Prof. Rafi Beyar wants his hospital to observe a “meatless Monday” for the benefit of patients.